The words you say to kids make an impact, and this one phrase can put shackles on them that are hard to remove.

Recently, my gym launched a kids grappling and MMA program. Starting with students as young as three years old, we begin with no contact, but use lots of activities that are designed to teach the fundamentals of striking and grappling long before the students ever have to worry about opponents.

Yesterday, I was working with one of our newest students, a four-year-old boy. He had plenty of energy, but when it came time to working on rotational movement, or any movement at all that required core strength, his ability was low at best. When we were working on punches and kicks against the mitts, I assumed it was due to lack of technique. After all, technique can often make a large difference in applied power.

However, when it came time for us to work the basics of falling down, I found he was unable to bring himself from a lying position up to a seated position without rolling to his side and using his arms to assist in the action. Repeated demonstrations, guided practice, and hints to use the legs didn’t help. He just couldn’t get his upper body from the floor to a seated position without using his arms to assist him.

Finally, I asked him why he was having so much trouble. He looked at me and told me that at his previous preschool, he had been told by his teachers (and reinforced by his parents) that children his age were physically unable to sit up directly. He had been taught that due to his age, it was impossible – that he was so weak that he could not do it.

The internal rage I felt at this response – especially as I watched my son, who is a year younger, completing the full motion with no problems right next to this student – led me to recognize the most harmful thing that we as parents or coaches can ever tell our children. 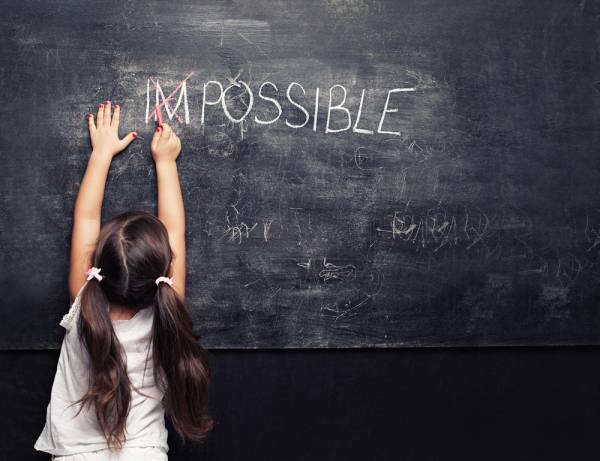 “Impossible.” “You can’t.” Whatever expression you use, you’re putting mental shackles on your child that might never be broken. I am not speaking of the word, “no,” which often has good applications, especially when you’re laying out safety rules. But “impossible.”

Living where I do in Japan, I hear the Japanese translation, muri, almost on a daily basis. Women saying that lifting heavy weights is impossible, even though I show them pictures of one-legged women doing deadlifts, and 99lb Asian women doing 100kg lifts. Men stating they could never squat or bench press what I do because their DNA makes it impossible. Ironically, one of the world record holders for the bench press, Daiki Kodama, is Japanese. And Japan won a silver medal in women’s weightlifting in London. But never mind that. Such acts are impossible.

Parents, break those shackles, and see how much your child can grow, physically as well as mentally. There is a reason my son is able to use a leverage machine to bench 20kg at a body weight of about 15kg. It’s not his DNA or any special diet we’re feeding him. It’s because when he first wanted to follow his daddy into the weight lifting area, he tried copying me. Instead of telling him it was impossible for him to do, I let him try for himself, knowing that the safety catches on the machine would not allow him to put his joints into an extreme range of motion, and seeing that his form was, overall, better than some of the adults I’ve coached.

Each and every day, the impossible is proven possible. Athletes are running faster, lifting more, throwing farther. We had an “impossible” 49-year-old world light heavyweight boxing champion, and an “impossible” seventeen-year-old professional golf champion, all in the month of April. Science and technology that was once considered the realm of Star Trek is now available for less than $200.00 in your local store. Social barriers once deemed as huge as the Great Wall of China are broken. What hasn’t been shown to be possible?

What to Say Instead of “Impossible”

If you are a coach or parent, let’s eliminate “impossible” from our coaching vocabulary. Instead, let’s try using these terms:

So parents and coaches, watch yourselves. You may be inadvertently handcuffing your children, and perhaps even yourselves. Remove the handcuffs of your own mind, please.