2014 will be my third trip to Carson to compete in the CrossFit Games. The first was 2011 in the 45-49 age bracket, the second was last year in the 50-54, and this year will mark my third appearance. The road to the games in 2014 was a much different beast than it has been in previous years, with the addition of the Masters Qualifier, a different training mindset, a larger field, and being a year older.

Allow me to give you the highlights, Buzzfeed style:

The masters have been clamoring for a regional qualifier for a while now, much of that based on two things:

Going in, it might have seemed that securing a spot in the top twenty during the Open would all but ensure your trip to the Games, but for perhaps the nineteenth and twentieth people fighting it out with the guys and gals who landed 21 through 25. Nothing could have been further from the truth.

The qualifier, which handed the masters four very different workouts than we experienced in the Open, upended the top twenty in most, if not all of the age brackets. Opening with a max clean was proof that the ability to move weight would be critical.

Let me put this in perspective. In 2011’s CrossFit Games, the second event for the masters 45-49 was a max clean and jerk. Ron Ortiz won that event with a 255lb lift. Ortiz took first place this year in the qualifier with a clean of 315lbs. Those who only cleaned 255lbs in the qualifier this year were rewarded with a tie for 62nd place. 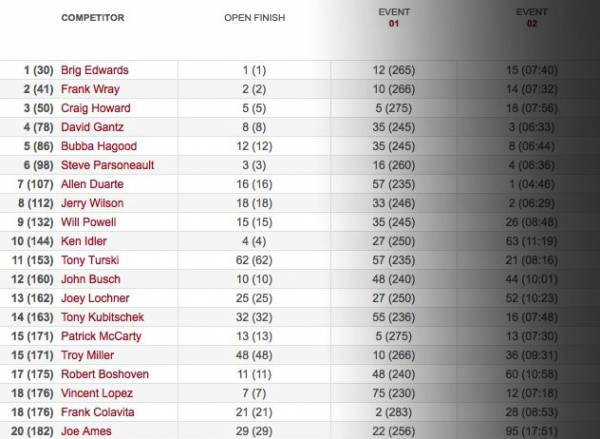 The upshot? To advance to the Games, you need to be strong. Very strong. My 275lb clean was good for a fifth place in the 50-54 age bracket. Think about that. You clean 275lbs at the age of 51, and that’s good enough for fifth? Wow. Don’t get me started on Steve Hamming in the 55-59 age bracket cleaning 295lbs. If you aren’t strong, you aren’t going to the Games.

So we got what we asked for – begged for, in fact – a masters regional that required us to show our metal in a different set of tests, stay extremely consistent across nine workouts, and possess a well rounded set of skills.

In 2013, my approach was 100% focus and dedication to making it to Carson, which resulted in 100% stress. I made it, but found that I was had less fun than I actually had hoped at the Games. This year, my goal was to get as strong and as fit as I possibly could, and if I made it to the Games, great. If not, great.

It made for a much more enjoyable year of training, and fairly relaxed Open, and only a few tense moments between workout four and the settling of the leaderboard. Don’t get me wrong, I trained as if I was going to the Games. I trained hard and remained dedicated to my programming right down to the last rep. However, the Games was no longer my primary goal. My primary goal was strength and conditioning. The Games was a secondary benefit, as is longer life, better health, and all of the benefits that will come from training hard and smart.

There Are No “Asteriks” in the Masters Division

Dave Castro did the online interview below with the winner of the 45-49 bracket, Jerry Hill, (first place through the qualifiers) and posed this question: “Is there going to be, for this division, 45 to 49 year old division, an asterik for these few years of victories because Bill Grundler is not competing? [sic]”

Jerry’s reaction is priceless. For a nanosecond, he reacts as though someone smacked him in the cheek with a pair of white gloves and challenged him to a duel. Then he quickly recovers and graciously gives both Castro and Grundler some placating, then moves on.

For those who do not know, Bill Grundler is a 45-year old, highly regarded CrossFitter who is clearly a friend of CrossFit Headquarters, and who has been providing color commentary for various events including the broadcast Open workouts. Last year Grundler basically dismissed the masters by saying that he would rather compete with the “elite” athletes and take a shot at the Games. He qualified both for the masters 40-44 and regionals last year, and declined to participate in the masters event in lieu of trying to make the Games, despite the fact that one can do both. He failed to podium in SoCal.

But the idea that somehow, this man, who has declined to participate, should be given the defacto absentee title of “winner” and thus handing anyone who dares to podium in real life an asterisk, is nothing short of insulting. Now, granted, Castro says all of this with a playful poke, presumably, but I don’t think anyone who is in serious contention for the 45-49 podium thinks it’s funny.

Two-time 45-49 champ Lisa Mikkelsen opted out of the Games this year in favor of family. Does this mean that whomever wins the women’s 45-49 should get an asterisk? No. That is absurd. The field is the field. Sam Briggs’ victory in 2013 did not come with an asterisk since Iceland Annie was unable to compete. Froning will retire after this year, and whoever wins in 2015 won’t get an asterisk.

Grundler does not factor in to the masters Games. May the best man* win.