While I see myself as a rather avid off-season hockey-playing golfer, even I know that my golf game could significantly improve. Recently, I came across an article in a golf magazine that addressed independent movement between the hips and shoulders.

Basically, the author said that if both units move independently then the results would be added power and increased distance. The article got me thinking. As with many sports, where does much of our power production come from? Our legs.

Granted this seems rather obvious since the muscles with the greatest bellies belong to the legs. Thicker muscles possess fuller, stronger fibers. In turn, these fibers are capable of creating greater force. For me the process is really a no-brainer. Actively engaging the muscles of the legs will produce greater club head speed.

The old theory was to keep your legs relatively within shoulder-width apart when taking a shot. For some shots, like a chip, that can be effective. But what about a drive? A wider stance actively recruits leg muscles to do more work. Work equals power. A wider stance also enables greater hip internal and external rotation.

Meanwhile, many professionals in the field suggest keeping your knees soft. A locked knee is horrible, but bending the knee more deeply engages powerful muscles in the hamstrings. In turn, this enables the player to create more power through the downswing.

The Importance of Hip Stability

Why is hip stability so important? It prevents looseness in the hips during the entire course of the swing. Unstable hips can lead to topping the ball during the impact or driving the clubface into the ground, make “fat” contact with the ball. Hip stability will provide both a more fluid swing and allow the quadriceps and hamstring muscle groups adequate means to transfer power from the ground to the body and into the clubface.

While genetics plays a huge role in overall body composition, many golfers are long and lean. This build structure is great for producing club head speed that can propel the ball well over three hundred yards. 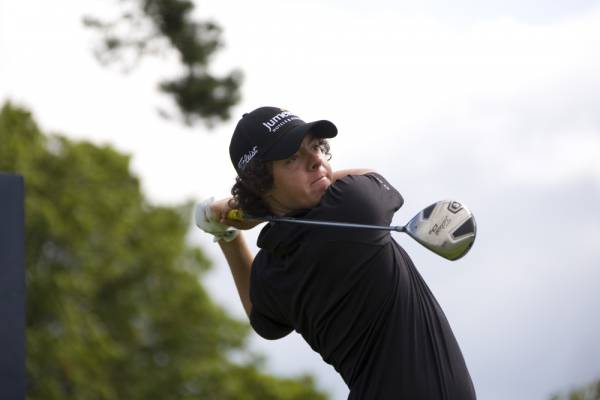 While height is advantageous, smaller players can have an edge. Their shorter muscles are able to produce quicker more explosive power, even though they lack the hang time that a much taller player possesses. This is part of the reason why you are able to see shorter guys like Rory Mcilroy (pictured above) averaging 303-yard drives. If I’m able to take that taller player and develop equal levels of explosive power to that of the smaller player, the result is a highly efficient powerhouse, resulting in something like Bubba Watson’s 311-yard leading average.

If I had the opportunity to work with Bubba, I can nearly guarantee that I could correct some issues that may add yardage and accuracy to his drive. Creating better symmetry between the quads and hamstrings could be that difference. At 6’3”, Bubba also tips the scale at 180 pounds. That’s pretty light for a larger athlete. Building his lower body would help to stabilize his core, as well as lower his center of gravity producing more power down through the ball.

When doing these exercises, I suggest taking your time to focus on perfecting your form and sacrifice weight. By doing so, you’ll ensure that the proper muscles develop movement memory. That’s the first step to adaptation.

Otherwise known as RDLs, this movement actively engages both muscles that produce power, as well as the muscles that stabilize the hip complex. Powerful hips develop through optimum stability combined with maximal muscle fiber recruitment.

You should begin slowly, focusing on form. Perform 3 to 4 sets with a weight that feels slightly heavy hanging from the arm. Once you have mastered the movement, then you can begin training for power. Your repetition range should begin at roughly 8 to 12 and gradually decrease as resistance increases.

All athletes can benefit from box jumps. The benefit to golfers is the lack of heavy resistance compressing the spine, such as that of the back squat, while the same muscles are being worked. This provides you with power glutes and hamstrings that develop increased power and speed through the downswing.

Completing 3 to 4 sets is adequate. The rep range should depend on the height of the jump. Most boxes begin at twelve inches and can grow to over 36 inches. Again, don’t shoot for the stars here, especially if you are an untrained individual. Your muscles will quickly tire. Reps in the range of 6 to 12 are sufficient. Remember to press the heels down through the ground and explode to the ceiling. Be sure to land in the same position with “soft” knees.

While this movement may not appear challenging, trust me, many of you have weak gluteus medius muscles. Lack of proper training can lead to poor hip stability, possibly hip impingement, and general fatigue after a round of eighteen. Developing strength here will ensure proper stability and enable your knees to lead the downswing.

Bands come in all different levels of resistance, so don’t be a trooper here. Selecting the right band should allow you to complete ten to twenty foot lateral walks left of your starting position and head back to your start position without rest. Completing two full walks should show you how neglected these muscles have been.

Employing these three exercises should help to solve some of your muscular issues, if not at least making you more capable on the course. Remember that the focus on form is key, as well as not overdoing it. The goal here is to make your game more complete and not finding yourself on the couch all weekend with a severe case of DOMs.

Chris Costa has participated in hockey as a coach, player, and official for 22 years. Growing up, he found a passion for sports through baseball, soccer, and hockey. As his hockey became more serious, he realized the importance of performance. He began training himself, as an early teen. Where he developed a passion for strength and conditioning.

He specializes in hockey training, both on and off the ice. His education has also given him the opportunity to learn how to implement a healthy, nutrition program. While Chris primarily works with hockey players and golfers, he openly works with all athletes. He found a passion in help elite athletes achieve an even higher level of performance.

In 2013, he worked as an intern with the Philadelphia Flyers organization. Currently, he is pursuing a Master's degree in Human Performance. He is also the owner of Assist Performance, a website dedicated to developing elite athletes. Chris’s other projects consider of a hockey performance specialist/writer for StackMedia, HockeyOT, and Ultimate Hockey Source.