Let’s get this out of the way: We cyclists are terrible athletes.

Yes, the best among us have amazing aerobic engines and can guide a bicycle up a steep alpine pass at incredible speeds, but when it comes to true athleticism, we stink. Our sport, more so than most, requires a severe amount of specificity, to the detriment of our functional mobility and strength.

But should we care? Shouldn’t we just be concerned with pedaling our bikes with more consistent power?

I’m here to tell you that cyclists should absolutely make an effort to improve their athleticism. Improving functional movement and strength will have huge payoffs in comfort and efficiency, which means an improved bike fit, as well as better times in the local hill climb.

As a bike fitter and physical therapist for the last 20 years, I’ve seen cyclists develop familiar patterns of limitations—in flexibility, dynamic strength, and speed to name a few—that repeat all too frequently:

Some of these cyclists that I’ve met over the years have been some of the unhealthiest “healthy” people I’ve come across, and ripe for injury, to boot.

I’d like to say that these circumstances are rare, but I see them more often as the mean age of cyclists rises right along with the distances of races, charity rides, and gran fondos that are marketed to the weekend cyclist. Instead of the average cyclist being more mechanically in sync with their bike, after 20 years fitting athletes, I’m finding more numerous and more severe bike fit issues.

Cyclists who truly want to improve in all aspects of their sport should focus on the three main limiters of cycling performance:

There’s not much that can be done about the first part; we don’t get to choose our parents. Good training plans are common and abundant, so every athlete has this available to them.

Comfort and mechanical efficiency are the x-factors. And there is a tricky, binary relationship that exists here: the bike being properly matched to the body (what we traditionally think of as bike fit), and the body’s ability to adapt to and move with the bike.

More cyclists are seeking out exceptional bike fittings these days; certainly a change from 15 or 20 years ago. But still relatively few are addressing their body, to make it a better “adaptor.” Effort inevitably influences our position. If a better bike fit is desired, changes to the bike can be made, but changes to the body will be infinitely more effective, and the benefits will persist longer.

Cycling demands a lot, but in a very narrow physical window, and over time, our body does its usual efficient culling of abilities, under the “use it or lose it” rules that apply to soft tissue and the central nervous system. We end up divesting ourselves of the motions and athletic traits that cycling doesn’t use—that list is both long and specific—and the way we fit our bike continues on a perpetual digression.

Here’s just a sampling of what is not required or challenged during cycling:

The answer to this is to get off the bike and do something different. The time has come to be a better athlete first. Here are a few rules to follow. 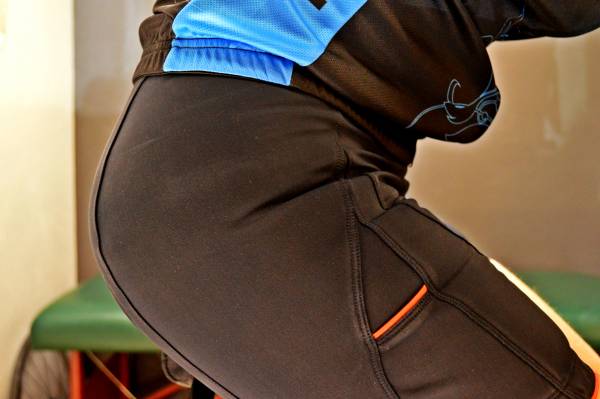 Your hips never stray far from this angle on the bike, which means your glutes are never really activated.

What the Cyclist Needs

Not just because building a little strength up there is a good idea, but because resistance training the upper body will recruit trunk and core muscles more completely.1 It’s too easy to forget that the “core” includes the tissues that support the upper body and arms as well. Since cycling posture relies on weight-bearing through the upper extremity as well as the lower, improving the coordination of arm strength and upper trunk control will lead to more efficient posture and pedal stroke.

We need to explore greater range of motion (ROM) through our joints, but especially in the spine and the hips. There is more cause to do this than the vague benefit of increasing our ROM. Many cyclists struggle with disadvantaged muscle groups (like the glutes) being severely inhibited. Challenging these disadvantaged muscles can result in them firing sooner and more completely through the pedal stroke, which may result in more power output, but definitely can result in the workload being distributed over more motor units.

Break Out of the Sagittal Plane

Cycling isn’t alone in that much of its movement takes place in one direction, but it is unique in just how much this is reinforced. Running also entails mostly sagittal plane motion, but lateral stabilizers like the hip abductors, obliques, and transverse abdominus are required to do significant work as well. On the bike, the passive stability provided by the machine itself severely limits lateral and “out of plane” challenges, so corrective work needs to address this as well.

The growth of cycling has occurred mostly among middle-aged adults, many of whom gravitated towards the sport because it’s so easy on the joints. In fact, steady state cycling creates forces through the legs that are less than the rider’s body weight, so joint loading can be less than what occurs on a brisk walk. This can be a relief to someone with an arthritic knee or hip, but not surprisingly, doesn’t do much for bone density.2 Cyclists need more joint loading, partially for the bone-health advantages, but more so because the joint loading gets transferred to the soft tissue, which improves connective tissue strength,3 and enhances the amplitude and frequency of motor signals being sent from the central nervous system. This can pay off in the form of greater protection against the common tendinopathies seen in the highly repetitive sport of cycling.

How Cyclists Can Become Better Athletes

There are a lot of ways to skin this cat. So many, in fact, that cyclists often feel overwhelmed and do nothing as a result. But cycling is so limited, that just by doing something else—anything else—cyclists will invariably improve their athleticism.

The gold standard for reaching all these deficit areas would be a healthy diet of Olympic lifts, since they tick all the boxes: upper body involvement, greater range of motion, cross-planar movements, and high loading profile. But they’re not necessarily something that a beginner handles well, especially one with the potential for so many movement dysfunctions. These can be implemented later in training, once some progress is made through other interventions, and a thorough screening is done.

With a little guidance, kettlebell work can be a good introductory exercise that hits all the important areas. Plus, they’re less intimidating and are a much easier “on ramp” activity. They also open up the door to a tremendous amount of specificity. It’s fairly simple to create custom movement sequences to address specific limitations.

My personal favorite though is the Turkish get up, an exercise that’s very familiar to many. Its combination of movements represents, in my opinion, a nearly perfect mobility sequence for cyclists. I prefer the “high bridge” adaptation to the “low sweep” version, in order to actively produce more hip extension, as demonstrated in a breakdown of the Turkish get up. I believe that many cyclists could simply do this one exercise and undo many problems on the bike.

Even simpler interventions could work as well:

Just about anything that introduces variability in loading, posture, and mobility can work.

Cycling demands a lot of resources, in time, energy, and money. So make sure, as we head into a new season on the bike, that some focus is placed on becoming a better athlete first. For many, this is the first step in becoming a better cyclist.

All those miles don’t get you out of hitting the weights:

John Weirath, a practicing physical therapist since 1997, has been specializing in cyclists from the beginning.

Growing up in Chicago, team sports were his first love, especially basketball and baseball. But college brought a deeper introduction into endurance sports. Marathons, iron-distance triathlons, and solo 24-hour races soon followed, and with that, a questioning of the usual training tactics. Interval work and strength training has played a role in his practice, long before it became mainstream in the endurance community.

His expertise in bike fitting and cycling analysis is unique, and stems from the level of training as a physical therapist, the technology used—infrared motion capture, high speed video, 3D saddle pressure analysis—and his 20 years of data points garnered through the thousands of clients he’s treated.

A serial entrepreneur, he currently owns one of the first bike fit studiosin the country, as well as multiple websites geared towards solving client problems in the realms of endurance trainingand bike fitting.