For maximum calorie burn and minimal impact, nothing works like treading water.

I’ve been a big guy all of my life. I was that awkward kid in junior high who was taller and definitely heavier than every kid in my class. Naturally, I migrated to football and found my home at center. Big guys are necessary on the offensive line, but what happens when you aren’t suiting up for a game on Saturday and don’t need that weight to tackle an opponent?

Every day since I “retired” from football after college, my battle with weight has been an ongoing struggle. The heaviest I have been as an adult was 338lb. I have always lifted and I’ve always been strong, but since football, I’ve never needed to be that big. And let’s face it; I was most effective as a footballer at around 285lb, so that’s more than 50lb heavier as a non-athlete. Unacceptable.

A Broken Body Finds Relief in the Pool

When I quit playing, my body was broken. I had endured more than a decade in the trenches. I suffered a back injury during my senior year that would eventually end my playing career. Another player was dumped onto the back of my legs, bending me over backward. After the bodies were peeled off of me, I slowly returned to my feet and finished the game, but the next morning I couldn’t walk. I spent the rest of my senior year making multiple visits per week to the chiropractor, sitting out practices, and overdosing on ibuprofen. When game day rolled around, I’d grit my teeth and play through the pain. Things got so bad that I sat out my final two games. A shitty way to end a career.

I knew I needed to rehab my back and lose weight to take some of the pressure off of my spine. Running was definitely out, and stationary cardio equipment was so uncomfortable that I couldn’t work long enough to make a dent in my weight without having to tap out because of pain. So, in an accidental stroke of genius, I found a pool and started treading water.

I made a deal with myself to tread for at least thirty minutes daily, for ten days. I also made much-needed nutritional adjustments. At the end of that week and a half I had lost 18lb. I knew I was onto something.

For heavier athletes, the low-impact nature of treading water allows them to burn calories without risking injury.

The immediate advantage of treading water in my situation was the weightless environment. Being suspended in water took nearly all of the stress off of my joints and allowed me to move relatively pain free. Bigger individuals, people who are nursing an injury, those with arthritic conditions, severely deconditioned folks, or anyone who wants to de-load the joints will all find the water a safe haven.

The second big payoff is the continual movement. If you stop moving, you sink. Every single inch of your body is working while you tread. Depending on the type of kicking motion you choose (more on this later), you can make it harder or easier with slight adjustments. I have done literally dozens of kick and arm variations over the years to keep things interesting.

Next, there is a thermoregulatory effect when treading water. Most swimming pools keep the water between 77-82°F (25-28°C). When you are submerged for any length of time, your body’s survival mechanisms kick on to maintain your core temperature. When all factors are considered (conduction, convection, radiation, and evaporation), the body loses heat four times faster in water than it does in air of the same temperature. Therefore, it must make metabolic adjustments to keep the core temperature steady. This results in additional caloric expenditure without a change in perceived effort or intensity.

Finally, there is the inherent resistance that comes with being submerged. Every movement in the pool is met with the drag of the water, making things hard. Take my word for it, you can completely smoke yourself in a short amount of time.

Burning in the Water

As I started my ten-day trial, I did some research on the caloric value of treading water. To my surprise, treading water was at the top of the list when it came to caloric expenditure per hour.

Running sprints can mow through glycogen and other metabolic substrates in a way that the same amount of time treading water can’t do. But how long can you sustain that sprint? Even if you do intervals, how long can you maintain heightened levels of effort before your performance and the accompanying caloric burn fall apart? If you’ve done any type of intense sprint work, you understand it’s not very long.

I’m a svelte 300lb right now. If I plug my numbers into a calorie counter and determine the total calories burned in an hour’s worth of treading water, I will get a final total of 1,410. If we take a similar tool and look into how long I would have to run to get the same burn rate in the same amount of time, I would have to sustain a sub 10-minute mile for an hour to burn 1,410 calories (a 10-minute mile for 6 miles would only get me 1,361 calories for the hour).

Think about the pounding my body would take running for an hour. To be candid, running for sixty minutes sounds like absolute hell to me.

It Gets Harder as You Get Leaner

Early in my career, a coaching team I was on put heavier athletes in the water to help them drop weight. We called it BRC (Boiler Reduction Crew). As with my own experiment, we had quick success and didn’t beat their bodies up in the process. Part of the reason the athletes were able to work for such long periods of time to facilitate weight loss was because of our friend buoyancy.

Now, take a person who isn’t 30lb overweight. Their relative lack of buoyancy makes treading water really, really hard. My assistant Chris White is a tank. Dude is 240 pounds of ripped muscle. Chris a good swimmer, but he sinks like a brick if he’s not moving forward. Because he has so little body fat, he has to work extremely hard to keep his head above water. We have done numerous hour-long sessions in the pool, and where I can go the full distance, Chris can only do 3-5 minute bursts before grabbing the wall. I’ve seen this guy sprint, row like an animal, and smash kettlebell routines without batting an eye, but drop him in the water and tell him to keep his head above the surface and you’ll see horror wash over his face. 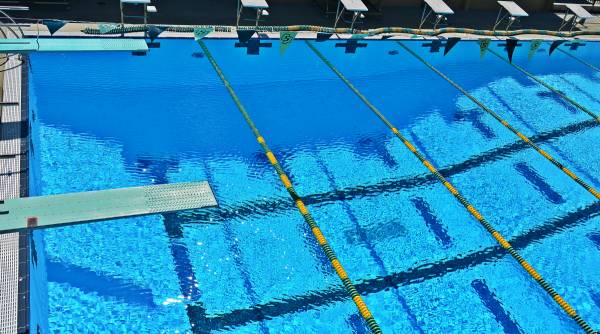 Treading water for any period of time is enough to challenge even advanced athletes.

How to Get Started

For some, like Chris, simply keeping their head above water is a challenge. For others, like myself, I can keep my arms out of the water and do sprint intervals with only my legs. Or, I can use only my arms for a different challenge. Sometimes, a moderate combination of arm and leg strokes for the long haul is just what the doctor ordered.

I use two kicking techniques: the eggbeater and the scissor. The eggbeater kick is an alternating circular motion with the legs. It’s typically used exclusively for treading purposes. Scissor kicks are much more difficult, and these long, sweeping, front-to-back kicks are my go-to.

The arm action can follow any pattern you wish. I’ve done figure eights with my hands by my side, and a variety of pushes back and forward or up and down to make things more complicated. The goal is to find a rhythm that you can maintain for an extended period of time.

Not Your Grandma’s Pool Routine

The biggest variable is time. I’ve done as much as two hours non-stop in a single session, but you can adapt your time in the water to whatever your needs, abilities, or time constraints are. The only downside is that it can become somewhat monotonous, and if you are alone, the time can drag. But like any program, bring along some music or someone to tread with you. Conversation can make the time fly if you have the right treading partner.

I’m sure most of you reading this are envisioning old ladies doing water aerobics at a rec center pool. But don’t knock it until you try it. Treading water is as challenging as many more glamorous programs, and far more effective for caloric expenditure and fat loss.