Running is weird. Considering that you learn to do it as a child with no coaching at all and that running itself is hardwired into us and was a major reason for our survival as a species, most of us just plain suck at it.

Running is weird. Considering that you learn to do it as a child with no coaching at all and that running itself is hardwired into us and was a major reason for our survival as a species, most of us just plain suck at it.

All you need to do is go for a drive early on a weekend and see the horde of zombie-shufflers out there “running” to see for yourself that most people have no idea how to run. But hang out with runners for a little while and you’ll still see that many don’t have any real idea what they’re doing.

While there are many basic faults in running, the thing that seems to elicit response on par with a jihad is heel striking versus forefoot striking. “Natural” running proponents will tell you that you should run like you do when barefoot, as that is the way that nature intended and is the way that allows all the structures in our foot to do their jobs properly.

The problem with this approach is that we run differently on different surfaces. Imagine how you’d run across the road barefoot on a hot summer’s day versus on a football field that you knew was flat and where you had no risk of striking glass or little feet-destroying pebbles. They’re two completely different things.

Most of this debate comes from a particular type of heel strike that happens when running. In a lot of cases, those who land on their heels first do so on a straight leg with the foot in front of the body. This stiff leg acts like a brake and actually slows the body down momentarily, until the body is able to coast up and over the stiff leg.

It’s not until the hips go over the leg that the body can begin accelerating again as you create the next step. Over time this continual action of step-brake-acceleration is terribly inefficient and slow (not to mention the jarring caused by not being able to use your legs as shock absorbers will likely lead to a sore back, knees, and hips). 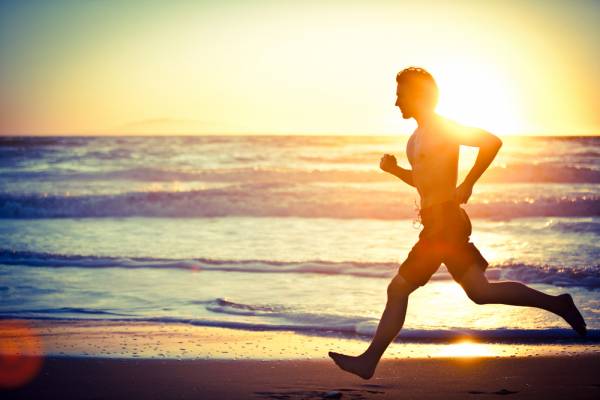 But, like most things, we want to have this very black-and-white view of what to put where when we run. Forefoot equals good, heels equals bad is what ends up in people’s minds and we then see people try to run landing exclusively on their forefoot.

I’ll tell you now that unless you’re tiny this will likely be a great way to set yourself up for all kinds of lower leg injuries like torn calves or inflamed Achilles. The reason is simple – every step done this way amounts to a single-leg explosive calf raise done with three-times bodyweight. At over a thousand steps per kilometre, that means a simple run around the block for half an hour can see you force your lower legs to deal with over a thousand tons of accumulated force. No wonder people think “running hurts them.” What really hurts them is running poorly, or not being able to deal with all that force.

To run safely and properly, we first need to differentiate between what is needed for sprinting and what is ideal for distance running. Let’s be clear: I’m only talking about distance running here. If you ever get an opportunity to watch an elite distance runner land, what you will see is that their heel actually kisses the ground.

Farah’s technique is different to what we spoke of above – the landing on a straight leg with the foot extended in front of the body with the heel as the first point of ground contact. What you see with Farah is that the outside of the foot makes contact first, the foot rolls in slightly, and the heel kisses the ground, before toeing off and repeating on the next step.

This is where people start to get confused. “Forefoot” running doesn’t mean just landing on your forefoot, but focusing on having your balance there. If you stand still you can try this. Focus on putting your weight on different areas of your foot while keeping the entire foot flat on the ground. James Dunne of Kinetic Revolution has a great piece on this forefoot cueing, along with a video by John Foster, which helps to explain it visually.

People always want to argue that the best runners don’t have any kind of heel touchdown at all. But this video below of one of the greatest runners of all time – Haile Gebrselassie – shows plenty of heel action.

Pain Free in One Session

I recently witnessed firsthand how effective this single change can be for someone. My girlfriend has been suffering from an inflamed Achilles for nearly two years now and any time we try to add some serious running into her training, she suffers greatly.

While on our training vacation to Thailand, triathlon great Jurgen Zack was able to get her to change her running stride (because, of course, she’d never listen to me) to follow the pattern detailed above and work on a flatter foot strike with the foot under the body. She worked on it during a single track session and came away pain free, despite running at a higher pace than normal. She was also 100% pain free the next day – unheard of normally. In the two weeks since that single change, she’s run more and more often and has been pain free both during and after.

All this debate on forefoot versus heel strike is unnecessarily confusing people. For the “truth” about how to run well, watch the Gebrselassie video and do your best to mimic that.

As you run faster and faster and tend more towards a sprint, you will come up on the ball of your foot more and more. But for distance running economy, you’re looking for a fairly flat foot position in the stance phase that has the balance on the forefoot. This one change alone will make the world of difference to your comfort and economy when running.