Shoes or No Shoes: How and Why to Build Up to Barefoot Running

What’ strange is that there’s no evidence to suggest that barefoot running actually works. Shoe manufacturers scream that with minimalist shoes you’ll fix all that ails you. But will you really?

It seems that running is once again cool. It’s been a while since the jogging craze of the 1970s, but running has gone through a rebirth of late, largely thanks to the book Born to Run. And like with anything these days, it seems that the way to attract people is to really market heavily on the “old school is cool” theme.

Running is perhaps the single thing that separated us from our Neanderthal cousins. Despite being more muscular and powerful, the heavier Neanderthal wasn’t built for long distances. During the pre-tool era, when we ran our food to death thanks to being able to sweat, the Neanderthal struggled. Poor old Neanderthal couldn’t keep up in the hot sun, you see.

The History of Man’s Inventions

In my head the history of human inventions went like this – fire, basic tools, shoes, everything else. I mention this because part of the marketing push driven at runners these days focuses on minimalist or barefoot running. But I would bet you if we could somehow travel back in time, you’d find that mankind has been making some type of shoe covering since very early times. Were they heavily padded sneakers? Of course not. But from the moment we were first able to make tools I will bet you that mankind started making shoes in various guises to protect their feet for better hunting.

What makes the barefoot running thing so strange is that there’s no evidence to suggest that it actually works. Shoe manufacturers and many running coaches scream that if you switch to less-padded shoes you’ll fix all that ails you. But will you really?

The Reality of Running Technique

Let’s just think about running technique for a moment and how it might be affected by a shoe, and while we’re at it, let’s think about what a natural versus unnatural running style is.

The barefoot advocates tell us that our foot mechanics are being messed with because we have big cushy soles under our shoes, ruining proprioception and allowing us to heel strike. Heel striking is a problem for some as it places the foot in front of the body with a straight leg. That means you have little muscular action to absorb impact with, and that your ground contact time is longer due to having to roll over your foot to begin the paw-back action that actually pushes you forward. A longer contact time also leads to higher muscular fatigue as the muscles are working for longer on every single step. So heel striking can potentially be bad.

But, as with all things, there is another side to this coin that the shoe manufacturers won’t tell you. Namely, it’s that even a runner like Haile Gebrselassie was a heel striker when he ran marathons. Strangely though, he was a more mid-foot striker, the type of running espoused by the barefoot guys, when he ran 10,000m on the track.

A study that I found in Medicine and Science in Sports and Exercise seems to show that roughly a third of runners will actually change the way they run based on speed. What makes this significant is that if you buy a shoe designed for one way of running – whether it be mid-foot or heel striking – that shoe may not be well suited for the entire run if you are doing work that involves change of pace or terrain.

This leads me to something I’ve been thinking about for a year or so now. Just because one shoe fits you today, doesn’t mean it’s the right shoe for tomorrow’s run. Tomorrow you may run on different terrain, or run at a different pace, or your legs might be tired. These changes could have you need more cushioning or less. Even if you were to run the same exact course for one session, and then repeat it two days later, you might need a different shoe simply because of fatigue increasing your ground contact time, meaning you are experiencing higher landing forces than the last run. So what you really need is a few pairs of running shoes to cope with the different demands of the types of running you do. 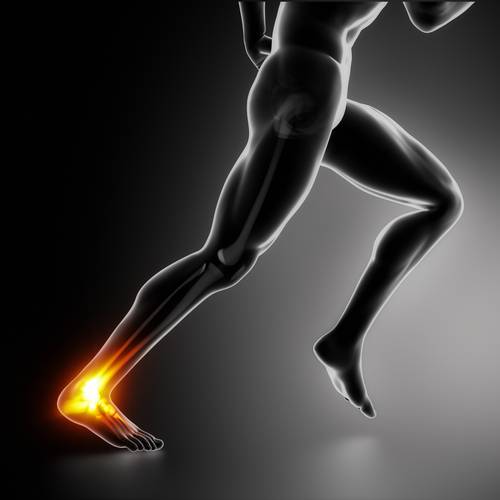 The biggest shoe issue for most runners, though, is buying into the marketing hype and trying to run on the forefoot while wearing next to nothing. If you’ve spent your whole life wearing padded shoes and one day decide to throw off the mantels of your modern life and return to more primitive times (by buying hundred dollar sneakers…), then you’re in for a shock. That shock is going to come about a day after your first run – when you are crippled with muscle soreness in the calves, or worse, you end up tearing a calf or Achilles.

If the Shoe Fits

Minimalist running for most is a moving target. It starts with what we should call a “normal” runner and eventually ends at a minimalist shoe. But that process might take a couple of years to get to. It requires slowly building the strength in the feet and calves to deal with the extra stress of running in a lighter shoe. Because all that padding in a shoe, even though the barefoot guys tell us it’s no good, is actually helping to absorb some of the force from running. When you remove it, your body has to deal with that force on its own. And for many that is asking too much too early.

Even just trying on shoes can be problematic. Feet change their shape after being shod and if we change the shape then we change the function. Not only that, but the foot will behave differently walking than it will running. So the common test of standing or walking over a plate to show where pressure is applied is largely useless when it comes to deciphering if a particular shoe will be good for you. But basing shoes on what a person does standing still makes no sense, so good stores will usually have some kind of gait analysis on a treadmill. But even that has pitfalls as there is no evidence to show that prescribing a shoe that is a neutral shoe, or a shoe for an over-pronator for example, will actually decrease injury rates.

Your Foot Can’t Handle the Truth

Part of the problem with running is that it is hard on the body. Being heavy adds enormous extra stress when it comes to the forces the body has to deal with. So let’s imagine your typical out-of-shape person as he starts his running journey – and he really is typical because sixty percent of the world is overweight. Even at just 100kg (220lbs), he’s going to have to deal with up to 300kg of force on every single step. Multiply that out by 1200 to 1500 steps per kilometer and a simple three-kilometer (two mile) run equals 360,000kg of force to absorb. Now imagine he do that without any padding at all – in a minimalist shoe. 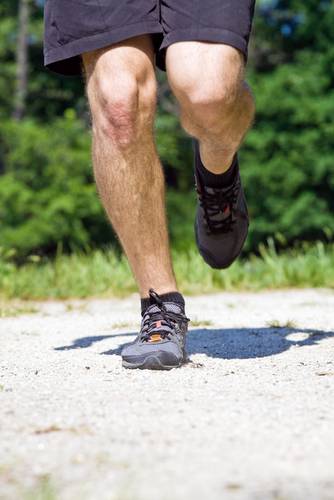 So maybe minimalist shoes should be the end goal, but for our guy a more padded shoe is actually going to allow him to run a bit more without getting hurt. Those runs are crucial to build the skill and feel of running so that he can attempt to get to the point where he is running injury free. Of course, the biggest thing he can actually do to get better at running is to lose weight. (I suggest a few repeats every night of stop-eating-crap.)

One of the biggest misconceptions about running is that everyone should just run and learn how to run. This is what I alluded to when I spoke about natural versus unnatural styles. If how you run – right now with no coaching – is horrendous, then surely your natural running form needs help? So anyone who has had technical coaching, gait analysis, or read a book on run technique is probably running in a style that is no longer natural. That’s probably a good thing, as I see a lot of people who run like Elaine dances.

But then we go back to the forefoot versus heel strike thing and it all starts to unravel, because just like with shoes, there is no solid evidence to show that any form of running coaching – be it POSE, Chi, or whatever – actually does anything to decrease injuries.

In light of all that, the only solid advice I can give you is:

As in all things, moderation and common sense are the biggest keys to getting into running.