The most engaging aspect of kettlebell sport is its inclusiveness. At the recent International Union of Kettlebell Lifting (IUKL) World Championships in Dublin, 35 countries participated and over 565 athletes competed at the event. They were comprised of junior, veteran, amateur, and professional athletes, male and female, within a broad depth of bodyweight categories. It was the second IUKL Kettlebell World Championships hosted outside of Russia.

The growth of the sport beyond its old core countries – the USSR and its satellite states – has been rapid, but this sport has yet to make a mainstream impression within the fitness stratosphere.

The History of Kettlebell Sport

Let’s focus on the veterans. They are the history of kettlebell sport competition. They have watched the evolution and development of this sport into arguably one of the most complete physical challenges that a person can undertake today. There were many heroic performances at this championship, but the biggest heroes that I saw were the veteran men and women who made their way to Dublin this year.

Physically, kettlebell sport is a skilled, co-ordinated, whole-body movement. The movement principles for the jerk in particular might be seen as similar to Olympic weightlifting. The weights are light by comparison, but the mental and physical effort is endurance-focused, spread over a ten-minute period. There is no rest between reps, as the bells are either overhead or on the chest. Both positions limit free breathing and if you put them down at any point, your set is finished. The awareness that as we age, our breathing efficiency can become compromised makes the veterans’ effort all the more impressive. You’re on your own – and it’s a battle between resting long enough to recover and briefly enough to be able to maintain breath at all. No doubt all sports will claim that they train efficiency, but for veterans in particular, efficiency in technique is crucial in kettlebell sport.

Training for competitive sport at any level can be testing, but girevoy (another name for kettlebell sport) is a discipline in which it can take a year for even the best lifters, let alone older athletes, to gain a single rep on their personal bests. Most sports seem to have good days when everything goes well and PBs are broken. You don’t see that so much here. It’s more a matter of dogged progression and graft in this sport.

“There were many heroic performances at this championship, but the biggest heroes that I saw were the veteran men and women who made their way to Dublin this year.“

For the veterans in particular, it would be easy to find a less difficult path, to hang up the belt and move on. But some of these guys have been lifting for 40 years and they still want more. That relentless striving and competitive spirit is reflected in a movement and exercise longevity that we could all take something away from.

Russia and Kazakhstan brought the largest veteran contingent to the Championships, with three of the oldest male athletes:

All took medals home. Zavarin, at 78 years of age, was in a league of his own – but that didn’t dilute his effort. Watching him walk around the venue, you saw an elderly man with dodgy looking knees and poor posture. But to then see him mount the lifting platform and start his set, you’d have never guessed his age. His movement patterns were solid and consistent. With the most determined expression, he lasted the set and finished strong.

The USA entered competitive veterans in both the 55-59 and early 60-64 categories. Mike Sherman continued to inspire both young and older lifters. At the age of 59, Mike puts up respectable numbers that would challenge many a younger lifter. He began training in 2006, a good while ago by Western standards, and has competed 72 times so far. On average, he has been stepping up on the platform around 10 times a year. In 2013, he competed a total of 14 times, showing astounding stamina and dedication.

Many European countries are also becoming better represented by the 45-49 and over, and beyond 50-54 categories. France’s most senior female competitor, Michèlle Wauquier, was a particularly outstanding lifter.

At the IUKL Championships, the rules allow a veteran to compete in the Open category and mix it up with the younger athletes. Many do, and a few, like Chris Skeats of England and Per Olhans of Sweden, entered themselves into both categories. In his fifties, Per is one of the most determined athletes I have ever seen. He introduces a little drama to a competition. He almost always completes his sets with a fall to the floor, completely spent. You get the feeling it’s not an act, and he really does put everything into it.

This year, Team England put up one male veteran and five females:

Three of them brought home medals, including a gold medal and world championship title. All of them represented their home nation with amazing stamina and energy. Veterans were also well represented from the Irish, Danish and Scottish teams. 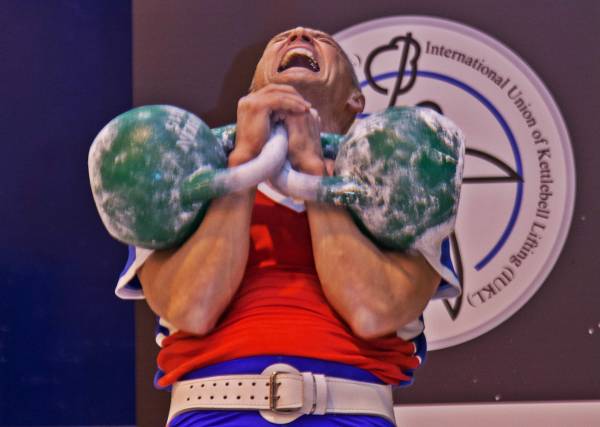 The older gireviks are powerful representatives of health and longevity.

Training Is a Balance

How often do I hear that age is just a number? This is true to a degree – but as the years pass, some things do change. Physiological changes, such as the reduction in fast twitch muscle fibres, may be balanced by greater physical and mental endurance, increased tendon strength, competition experience, and practice. Slower recovery rates can be balanced by better programming and taking rest and recovery techniques seriously. Veterans of kettlebell sport must work smarter and take a look at other endurance sports to draw knowledge and inspiration from the techniques used within.

The Key to Living Longer

The older Gireviks are inspiring examples of what regular mobility drills, play, sport and enthusiasm can achieve. They are powerful representatives of health and longevity, all of whom resonate with me personally and as a professional health care advisor and practitioner. We obsess about living longer, but perhaps we should be concerning ourselves with living better right now. Perhaps, just perhaps, this will help us to live a longer life along the way.

Look to these veterans for inspiration if you participate in this exciting and up-and-coming sport. In the UK, we’re in a privileged position to be in the beginning stages of the sports’ local development, and I urge you to embrace the huge pool of both home grown and international coaching talent.

To the younger lifters – I suggest that you take the time to seek out and talk to the older lifters, because they have a wealth of background information and experience.

To the older lifters – continue with your generous sharing of knowledge and enjoy marvelling at the speed, power, and grace of those who follow in your footsteps.

Sam MacIntosh is a writer, editor, and a British Weightlifting and Precision Nutrition certified coach.

Sam played football from her pre-teens through to university, briefly switching to rugby when she was 25. It was then that she was introduced to strength training and weightlifting by a teammate and began training in CrossFit in late 2013. Shortly after, Chet Morjaria of Strength Education took her on as a powerlifting athlete and coached her to first in her weight class at the 2014 Welsh Powerlifting Open. She now trains in Olympic weightlifting and is the head barbell coach at CrossFit Gain in Norwich, England.

Sam is passionate about empowering athletes to think independently and neutralising nutritional propaganda. She's a recovering perfectionist, and enjoys coffee, books, and cinnamon donuts. You can connect with her on Twitter and Instagram.