Why Local Functional Fitness Competitions Are a Good Thing

From relationship-building to motivation, here are four reasons while small competitions are a big deal.

In nearly every sport, you have your pinnacle event – and then you have your grassroots version of that event. For every Boston Marathon, there are a thousand “Mid-River 5K” races. For every Masters Golf tournament, there are a hundred “Turner Insurance Agency Shotgun Classics.” It is the nature of our beings that we don’t just want to practice the sport(s) we love. We want to play them.

There are a lot of reasons these local competitions can be a positive way to spend your weekend. We’ll look at four of them here.

1. The Next Champion May Find His or Her Spark

Janet Black, this year’s 40-44 Women’s CrossFit Games champion, did her first local competition in 2010. She placed fifth after only having been training in CrossFit for a couple months. That competition lit a fire in her. She found the adrenaline of competition compelling, and went back to her box determined.

The following year she came back to win that competition, but moreover, she went on to qualify for regionals a staggering five consecutive times in the South Central Region, including in 2015. Meaning she made the top twenty, at the age of 41.Now, imagine Janet had not taken on that first competition and just continued to train to be fit. She may never have found that fire of competition and the benefits she has derived from it, including a berth at the CrossFit Games as part of a team, two years in the masters competition of the Games, and a starting role on the DC Brawlers, the 2014 GRID champion team.

“Someone who will be standing on the podium in Carson in the coming years may well have first stood atop a 24” box with a gift certificate for a massage and a jug of protein as a prize.”

There are many more stories like this out there. For every Janet Black, Katrin Davidsdottir, or Shawn Ramirez, there was someone on the same CrossFit Games weekend who ended up fourth, or ninth, or last at some local throwdown – but who found the thrill of competing too compelling not to pursue. Someone who will be standing on the podium in Carson in the coming years may well have first stood atop a 24” box with a gift certificate for a massage and a jug of protein as a prize. And as a result, this person may envision a whole new world of CrossFit domination.

There is something about an event that brings people together – especially the inter-box comingling that occurs when gyms get together to compete. Most of the relationships I formed with people from other gyms resulted from participating in competitions. I have met some cool people this way, including box owners, volunteers, and competitors. It’s like one big party where you get to make new friends.

It’s also a great community builder for the host gym itself. Mobilizing a force of volunteers, judges, photographers, event planners, equipment movers, and food prep folks, allows to you interact with people you may not play with on a daily basis. The 5:30am crew gets to hang out with the 6:30pm gang. This is fantastic for intra-box community relations. When everyone comes together for a common purpose, the result is fulfillment.

Many fitness competitions have been created around fundraising. Whether it’s to raise money for a specific charity, a specific person who has become ill or is experiencing hardship, or for things like Barbells for Boobs;or the Wounded Warrior Project, these events work on many levels because they give competitors a purpose and the fun of a spirited day of competing translates into goodwill in the long term.

“These events work on many levels because they give competitors a purpose and the fun of a spirited day of competing translates into goodwill in the long term.”

For example, CrossFit Unyielding of Covington, Georgia holds an annual event called Unyielding to Cancer. Last year they raised over $10,000 for two local families dealing with the treatment expense from a loved one’s battle with cancer, and this year they hope to raise upward of $20,000 to help two additional families. MS WODs New Hopeis a fitness fundraiser seeking to raise money for a member of their community who is suffering from MS and is facing new treatment possibilities that will run in the hundreds of thousands of dollars. There are many more like these.

In fact, the competition website RX Competitions has an entire fundraising section and a quick perusal will reveal many events seek to go beyond the podium and to synergize with a worthy cause. If you’re organizing a competition, instead of handing out prize money, what about donating it to your local food bank, homeless shelter, or to the cancer research fund of your choice?

4. Giving You a Goal

Lastly, what better way to test your own progress than to compete? Janet Black had a measurable way to check her progress – fifth place one year, first the next – in the same competition, against many of the very same people. From there, the sky was the limit.

Competition gives you, the athlete, something to begin gearing up for. It gives your coach something to program for. Following the CrossFit Games season, signing up for an October competition might be perfect for an eight-week cycle of conditioning and skill training, followed by a new cycle to get you ready for the Open. 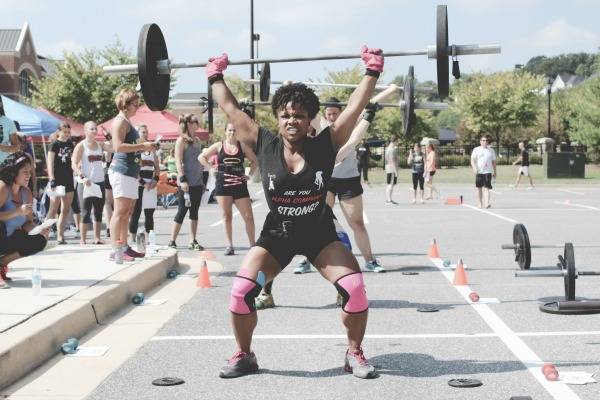 The caveat, of course, would be to consider your competition calendar carefully. I have always been vocal about recommending no more than three competitions per year, and that includes the Open. There are some athletes who like to binge, but many competitions are growing in volume and overall demand, which translates to fairly heavy punishment to your body. Team competitions are a little more forgiving since you are able to share the work. Whatever you choose, consult with your coach to make sure you are parsing your competitions evenly and wisely.

I recommend everyone try his or her hand at competition – even if you are fairly new to the sport. There are many events that offer scaled divisions and more that are devoted entirely to novices. Find one that is right for you, get a team together, and go have fun.