Why Unpacking the Shoulder in Pull Ups Is Helpful

I’m going to give advice counter to at least 99% of what is out there. When doing pull ups, it is generally indicated to keep the shoulders packed down. I don’t think that’s the best you can do.

In this article I’m going to give advice counter to at least 99% of what is out there. When doing pull ups, it is generally indicated to keep the shoulders packed down. That is, to not let them shrug up at the bottom of the movement. (This applies to chin ups and any other variation of the exercise as well.)

In this article I’m going to give advice counter to at least 99% of what is out there. When doing pull ups, it is generally indicated to keep the shoulders packed down. That is, to not let them shrug up at the bottom of the movement. (This applies to chin ups and any other variation of the exercise as well.)

While I don’t think this is a bad idea, in that it will cause injury, I don’t think it’s the best thing you can do. I’ll get to why in a bit, but first, let’s discuss a related but separate note – the bend in the arms.

Some people say that you should not lock out your elbows when doing pull ups. The reasoning for this is that it is claimed it can cause injury. It can do that, in fact, but not really in the way most people think.

When a joint is fully locked out, the tension transfers off the muscles for the most part and onto the connective tissue, including the tendons, ligaments, and the bones of the joint itself. Just like muscles, the connective tissues can be made to become stronger. (In fact, there are specific ways of training that tend to hit these areas more than regular exercises do, but that’s a subject for another time.) But one thing that will be sure to keep connective tissues weak is to never lockout your joints. This became popular in bodybuilding for the purpose of keeping the tension on the muscles and not allowing it to come off of them during lockout.

The problem is that in doing this your muscles will become stronger and stronger (assuming proper strength training and recovery), but the connective tissues won’t because you’re not locking out. They never take on the strain of the weight, which in the case of the pull up is your body. This becomes a problem when you’re trying for a max effort and you get into this position you normally don’t train. Pop! Rip! That’s when injuries can and will occur.

For some people there may be physical limitations that stop them from achieving full lockout. In cases like these the exercise ought to be changed to reflect that. But if a person is just inflexible and can’t straighten his arm all the way that’s not an excuse to always stay this way. With proper progression over time you can build this flexibility, which will lead to a more injury-proof joint.

While not everyone will agree with this part about bending the elbows, the majority of qualified people would. (Please do correct me if I am wrong and you have other reasons why, as I’d like to hear them.)

Now onto the shoulder joint. Is it really all that different?

The Shoulder During Pull Ups

First off, here is what I am not saying. I’m not saying to do your pull ups with the shoulder raised the whole time. That would simply be bad biomechanics and leverage.

I’m just saying that it is not a bad thing to relax fully at the bottom of the hang and let the shoulders open up more. This can even be done with every rep. And then before you begin the next one you re-pack the shoulders to start your pull.

In no way do I see this as being injurious to the joint. Plus there are two reasons I see it as having value:

Reason One: I was just at a bodyweight training workshop with a number of impressive people there. One goal of mine that I have not yet achieved is the one arm chin up. The instructor there was able to do it by starting from a very slight flexed hang. In talking to him afterwards he said he wasn’t able to start from a dead hang and do it. 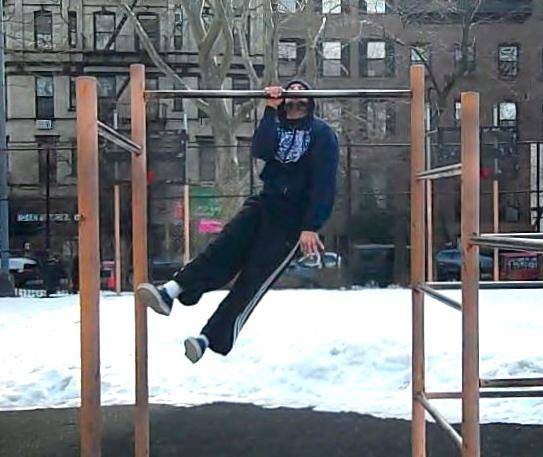 While I haven’t achieved the one arm chin yet, I’m closing in on it. What I can do is start from a dead hang and begin the pull. My guess is that I can do this at least in part because I open up the shoulders completely when doing pull ups. So I have turned what for many is a weak link in the chain into a strong point.

Reason Two: Another point is found in looking at what happens for most people when they’re told to pack their shoulders. The elbow tends to bend to a slight degree. It takes a good amount of control to keep these things independent. Thus the problems mentioned before can come up.

Now, when explosiveness and momentum is added to the pull up, as in kipping forms, that’s a whole different story. I’ve heard many people injuring their elbows and shoulders because of the excessive forces used when the joints and connective tissues aren’t ready for it. In that case I would advise you to keep the shoulders packed and elbows slightly bent to avoid joint wear and tear, or just avoid kipping pull ups for the most part and stick to dead hang versions instead. I recommend you experiment with this and see the results for yourself.