Why You Should Be Doing the One-Handed Hardstyle Swing

Hardstyle is the expression of ballistic strength. Here are some tips to help you get the most of it.

The one-handed Hardstyle swing is a great tool that builds explosive strength, powerful grip, and impressive glutes. Although the same benefits can be found in heavy two-handed swings, the one-handed version amplifies muscle activation as the body needs to stabilize the off-center motion of the kettlebell.

The one-handed Hardstyle swing is a great tool that builds explosive strength, powerful grip, and impressive glutes. Although the same benefits can be found in heavy two-handed swings, the one-handed version amplifies muscle activation as the body needs to stabilize the off-center motion of the kettlebell.

The Swing Is a Simple, but Multifunctional Tool

There are numerous articles on Breaking Muscle describing the benefits of the Hardstyle kettlebell swing. A quick list of advantages might show why it is written about so often:

The swing is an easy exercise, but it is demonstrated incorrectly in so many popular media sources. It is not a squat movement, but rather it is a hip hinge movement. That means the hips go back (hinge) more than the knees. The knees only bend slightly (whereas they bend fully in a squat). The easiest way to think about it is as a jump. If you try to jump as high as you can, the bottom position is the same position you use at the bottom of the kettlebell swing.

2. Be Explosive With the Hips, Not the Arms

The swing is a ballistic movement. If we think of a bullet fired out of a gun, it receives all its power initially and then relies on momentum to get to its destination. The same goes for the swing. The hips provide the explosive power that throws the kettlebell up in the air. The arms are just there for the ride. So, don’t worry about how high the kettlebell goes. Your goal is to let it float up once the hips have used up their power.

There are two primary ways to protect the back in this movement. The first is to engage the lats. What that means is you need to pull your shoulders back and down. I like to approach the kettlebell like a gorilla with my arms out. This position brings my shoulders back and down. I try to hold that position throughout the movement and not let my shoulders round my upper back. By keeping my upper back tight, I provide more protection to my lower back. 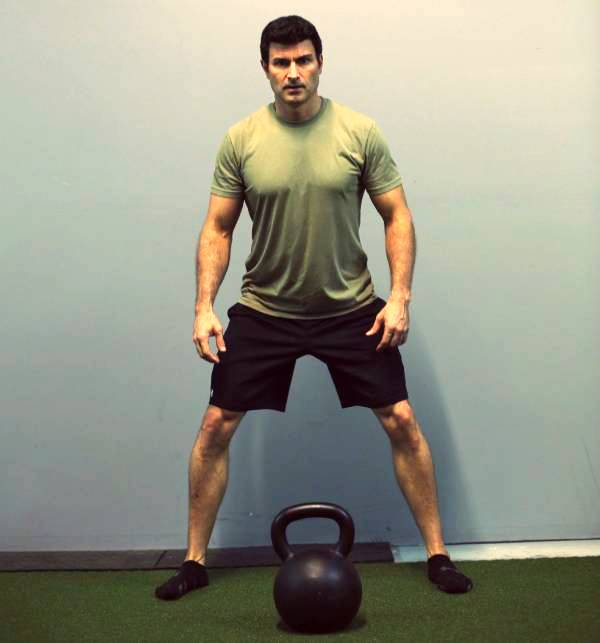 Approaching the kettlebell in gorilla stance

The second key to protecting the back is to not let the kettlebell pull the lower back into a bad position at the bottom of the swing. You can accomplish this by having the kettlebell go between your legs on your upper thighs. If you find your forearms hitting your lower thighs, you are putting too much strain on the lower back.

The two-handed swing allows for all the power to flow from the hips evenly. The one-handed swing adds complexity in that the lats must stay engaged to protect the shoulder from being pulled forward. Once the lats are engaged, the spinal stabilizers must also engage to keep the body from twisting. Pavel Tsastouline, in Simple and Sinister, described the differences between one-handed and two-handed swings:

Enter the one-arm swing. The bell not only pulls you forward, but it is determined to twist you as well. …An asymmetrical load seriously challenges the stabilizers and increases the recruitment of many muscles. When I swung a 32kg kettlebell two-handed in Prof. Stuart McGill’s lab, my glutes fired up to 80% maximal voluntary isometric contraction (MVC). When I did it one-handed, the recruitment was up to 100%. And the lat contraction jumped from 100% to 150%! In case you are wondering how it is possible to contract a muscle 150%, the max is isometric. In dynamic contractions higher values are possible – plyometrics are a case in point… Why would you do two-arm swings at all if the one-arm version is so great? Because two-arm swings generate more power, as proven on the force platform. With reduced stabilization demands, you can really let it rip. Hence, do both types of swings.

What Is the Difference Between Hardstyle and Girevik Sport?

Hardstyle is the expression of ballistic strength. Every rep should be as explosive as possible. We can liken it to sprinting or jumping as the body tenses to propel and then relaxes as it is set in motion. Girevik Sport (GS) is an elegant movement that has the main goal of being efficient. In competition, the goal is the number of reps completed. Thus, GS is similar to distance running as the athlete needs to endure over time. Often these two styles are pitted against each other. But really, one is a training method and the other is an endurance sport. They just happen to use the same tool.

Hardstyle kettlebell swings are one of the basic exercises I recommend to beginner to advanced athletes. As an athlete becomes proficient, we can add weight and/or we can switch to one-handed swings. Overall, the swing provides more bang for the buck than any other exercise. Note: I avoid teaching overhead swings as people tend to use more of their arms to pull the weight overhead, when the goal of the movement should be the explosiveness of the hips.

But the great benefit of the swing doesn’t mean you should go overboard. You may have heard of Pat Flynn’s 300 swings a day challenge or Dan John’s 10,000 (in a month) swing challenge. These challenges are nice, but the high volume can lead to poorer performance. I like an athlete to do every swing as perfectly as she or he can. Usually ten to fifteen swings is the limit before swings get messy. I recommend working toward twenty sets of ten swings every minute on the minute. Beginner athletes may do fewer reps per minute and fewer rounds.