In the Hardstyle kettlebell community, people talk about the “What the Hell Effect.” The phrase is typically uttered after someone uses only kettlebells for a period of time and then finds great increases in strength in other movements, seemingly unrelated to the kettlebell.

RELATED: The Origins and Explanation of “Hardstyle” Kettlebell Training

Andy Bolton, the first person to deadlift 1,000 pounds, uses kettlebell swings to improve his “maximal hip drive, speed, and aggression.” The hip hinge in the swing looks similar to how the deadlift is locked out at the top. I have heard of many people who trained for months before a kettlebell certification who also added a great deal of weight to their deadlift (one rep max and higher reps).

“The hip hinge in the swing looks similar to how the deadlift is locked out at the top.”

In the video below, kettlebell expert Lauren Brooks demonstrates the swing next to a deadlift. The hinge of the hips follows almost the exact same pattern. The big difference is the kettlebell swing is a ballistic movement (one explosive pop of the hips), whereas the deadlift (at heavier weights) is a continuous grinding motion.

Squat – Not So Similar

I have seen kettlebell swings in some popular media outlets showing the person squatting down to do a swing. That is not the swing we are discussing. The Hardstyle swing is a hip hinge, where the hip joint changes its angle more rapidly than the knee joint’s angle. In a squat, the knee and hip angle change simultaneously.

Take a look at coach Jeff Kuhland in the picture below showing the proper hinge and squat. The ending position is very different as there is much more angle in the knees in the squat. 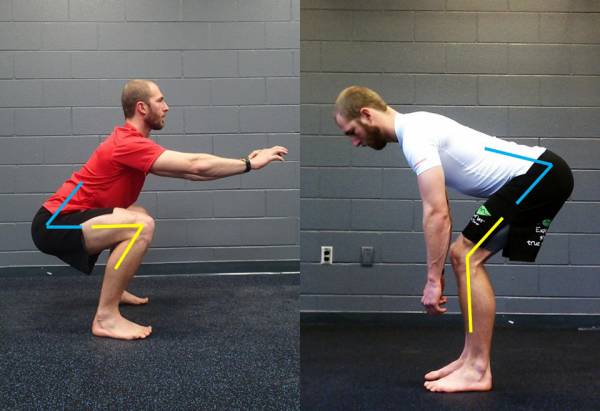 But just because the movement is different does not mean the swing can’t help your squat. The explosiveness that comes from the swing builds the posterior chain muscles, which are important in the squat. Researchers Jason Lake and Mike Lauder found that kettlebell swings helped squat strength in collegiate level athletes by almost 10%. The low bar back squat utilizes more of the posterior chain muscles and may be benefitted by the swing more than the front squat.

“[J]ust because the movement is different does not mean the swing can’t help your squat. The explosiveness that comes from the swing builds the posterior chain muscles…”

Sometimes it is easier to ask people to get into the hip hinge position by asking them to set up for a standing long jump. People naturally hip hinge as they are asked to jump. As Andrew Read explained, the kettlebell swing has been shown to improve vertical jump by about 20% in collegiate level athletes. The kettlebell swing is certainly valuable for building explosive strength and it may substitute for plyometric movements.

RELATED: 3 Ways to Use the Kettlebell Swing for Overspeed Eccentric Training

Scott Iardella asked me and many of his podcast guests a great question: “How is a swing hip hinge different from a clean or a snatch?” Some of his guests said it is not different and some said it is. Danny Camargo’s description of the Olympic movements seemed to seal the final answer for me.

Danny is a long-time Olympic lifting competitor and coach. He describes the hang clean (the snatch is the same) as an explosive hip hinge where the hip movement is blunted in the power position and the person moves to a more (thigh-dominant) vertical jump. The video below with him narrating explains it well.

One research group, led by Pasquale Manocchia, found that a ten-week swing protocol significantly improved clean performance. In their 2010 study, participants gained an average of 30kg on their clean. These subjects were of varying athletic abilities and one or two individuals could have skewed the average. A 2013 study with a larger group still found significant increases at a more modest 13kg (still great for a ten-week cycle).

“On the surface, the swing seems to translate to jumping and the deadlift, but research shows it also improves the squat and Olympic movements.”

Thus, while the kettlebell swing may not be the exact same movement as the clean or snatch, it can still build strength. For someone who is serious about Olympic lifting, the differences in technique are important and I would recommend focusing on only Olympic lifting technique to better performance.

The “What the Hell Effect” exists because people are surprised kettlebell movements transfer so well to increases in strength in other exercises. On the surface, the swing seems to translate to jumping and the deadlift, but research shows it also improves the squat and Olympic movements. What the Hell?

RELATED: The Kettlebell Snatch: A Swing That Ends Up Overhead

There are many other exercises that show similar effects, such as pressing strength going up from doing Turkish get ups. There are many great kettlebell programs available and I hope you find a program that brings about a What the Hell effect for you.