In my work with females trying to get their first pull up, I’ve spotted three main areas of weakness. I’m going to explain and offer a fix for each of these.

Not much impresses me more in the gym than watching a female knock out a few perfect chest-to-bar pull ups. These days it’s becoming more and more common, and women are paying more attention to strength training. It’s not at all unusual to see a girl with a big deadlift or squat, though, who still can’t do pull ups. So what gives?

One of the biggest problems that I believe people face is one of bias. This works both ways – from male trainers not pushing females clients to work on these harder movements, to females not believing a man would know how to help them achieve their first pull ups. I’ll say this so everyone can understand it – half of your possible clients are female.

If your trainer has been around for more than five minutes, he or she will have trained roughly the same number of men as women.

And trainers, muscle is not gender specific. If you went all Dexter on them and cut them up, you’d find far more similarities than differences. In other words – strength training is strength training, regardless of who is in front of you.

Having said that, I have found there are a few differences, but they’re probably not what you’re thinking.

For starters, women do tend to have less muscle mass in their upper bodies, up to forty percent less, and that will obviously affect their ability to produce force in an upper body-dominant lift.

However, physics is physics, and regardless of weight distribution females generally actually have an advantage over their male counterparts due to lower body weights and shorter arm length.

The equation for a pull up looks like this:

So once the initial strength deficit has been overcome, women actually can be just as competent as men in this strength test.

One final thing to keep in mind, that is actually a gender-specific thing, is that women will tend to have slightly more slow twitch fibers in their upper body.

This means that rep ranges that men will find the most beneficial will often need to be pushed up, just a bit, for them to be suitable for women. In other words, women need slightly higher reps.

In my work with females trying to get their first pull up, I’ve spotted three main areas of weakness and I’m going to offer a fix for each. These are by no means exhaustive, but I’ve found that they work and work well.

One caveat though – as the pull up is a test of your ability to move your own weight versus gravity, you need to be honest with yourself. In my mind, one of the reasons pull ups are so hard for many is simple – sixty percent of the planet is overweight. If you’re tubby you will struggle to get over the bar. So step one for pull up success is to shed body fat.

Problem #1 – Weak at the Start of the Pull

I’m going to anger many here, but there is a time and place for isolation exercises, and when you have a weak link in a movement chain, this is one of the appropriate times.

The start of the pull up is initiated by the elbow flexors. In these days of anti-bodybuilding functional training we often forget that sometimes it’s acceptable to do curls. 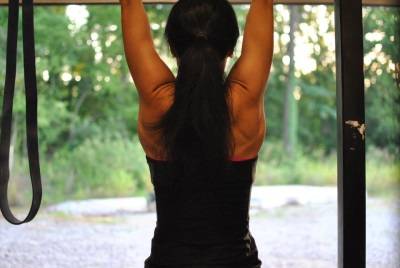 A good elbow flexor program takes all these factors into consideration. We’re going to start in the weakest position and work to the strongest in an extended set format, taking ten seconds rest between movements.

Rest two to three minutes between sets and perform four sets total. Select the weight that allows all the reps in the first set, and accept that if you’ve done this well you’ll drop reps on each successive set. Perform this twice per week after you’ve done all your other pulling work for the day.

The finish of a pull up is a mystery for many. They rely solely on their arms to do all the work, pulling only until their elbows are in line with the body. But try this little test for me:

Imagine you’re holding the pull up bar and you pull your elbows to your sides. See how far away your chest is from your hands? To really finish in a strong chest to bar position you need to pull your elbows back as far behind you as you can.

Notice what happens when you do that? Your upper back will light up all of a sudden, as rhomboids and lower traps engage to help you do this.

Once again we need to find an exercise that specifically targets this action to help us on our quest to our first pull up. Going back in fitness history a bit, rows were all the rage. Every strength coach worth their salt recommended we do more rows. Somehow this thought has been lost a bit and now the pull up is sexier.

Pull ups are a great upper body strength exercise and require little equipment, but one thing people miss when they shift all their pulling work to pull ups is that they’re actually making themselves worse long term.

All that pressing work you do – from bench to overhead pressing to dips to any other form of pressing – is all hitting your internal rotators. And despite what you think, pull ups do too. So even if you can finish your pull ups you still need some rowing in your plan to hit the external rotators.

Here’s another extended set that will do the job. Perform this series lying face down on a bench. Use the same set of dumbbells for the entire series – you won’t need to go too heavy:

The elbows-out rows are basically lying face pulls. You’re going to row the dumbbells up, but instead of pulling back with your elbows you’ll pull them straight out to the side, keeping your elbows directly in line with your shoulders.

Rest two to three minutes between sets and do four total sets. Like with the previous drills, perform these after all your pull up training for the day has been done.

Problem #3 – Not Linking the Body Together

When it comes to success in bodyweight movements one thing is vital – the entire body must be tight and locked together. Everything is either a plank or a hollow position.

Being able to maintain your plank or hollow is vital to the eventual success of the movement. If you watch people struggling for their pull up, you’ll see that at the moment they think they won’t make it they’ll start doing all kinds of weird stuff that looks like a fish flopping around on the end of a line. Learn to stay tight and you’ll have more success. 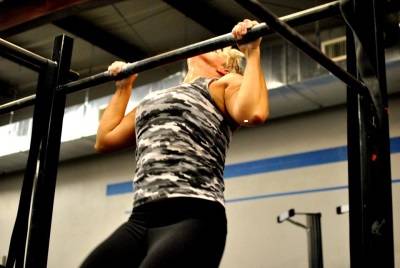 One of my favorite drills for this is a hollow drill. Lie face up on the floor and push your lower back into the deck. Now, holding a weighted dowel (a broomstick with 2.5-5kg on it works well) try to maintain that position as you lower the dowel back behind your head keeping your arms straight.

The goal here is to end up in a position that resembles the bottom of the pull up – arms straight and in line with the body – while holding onto your hollow position. Likely you will find that you cannot.

Working on this drill will strengthen your ability to link your body together as well as help you to learn how to hold this position, because this tightening of the body turns up the volume on your central nervous system and allows you to pull harder when attempting your pull up.

If you’re particularly weak these drills can be done daily – five sets of five reps, with each rep a five second hold will work well.

Good luck with your training!