The glutes are an area that receives a lot of attention and people have a lot of opinions on how to strengthen them, but how does this muscle group actually work?

When people refer to the gluteal region, they are usually talking about the gluteus maximum, a multi-pennate muscle that is akin to the deltoid of the shoulder- it generates hip movement in a variety of ways, depending upon how the bones are positioned.

Finally, underneath those two muscles is the gluteus minimus. It plays a supporting role in both stabilizations of the hip socket and movement.

While the gluteus maximus is often considered the prime mover of the hip joint, all of these muscles work together during various phases of gait and dynamic movement to keep your joint in the socket and to keep you moving forward.

You may have read somewhere on the internet that these muscles are “off” or they are “inhibited” or they “aren’t working.” The nature of their location means if they aren’t working, you wouldn’t be able to stand up or walk, so as long as you are upright, they work. However, your ability to load them so you feel the sensation of work is dependent upon position.

To illustrate this, let’s look at the difference between a squat and a deadlift, two frequently taught skills, both of which use the gluteal muscles to accomplish the task of returning to a standing position, but the way the gluteal muscles are used differs because of position.

In the deadlift, the torso is hinged forward, the pelvis is back, and the shins are vertical. In order to return to an upright position, your feet and hips work together to pull your pelvis forward.

Try this: Begin in a standing position. Step your right foot back about 18-20 inches. Let your left knee bend and feel the weight in the left foot (your right foot is on the floor as well, but for the purposes of this illustration, think about your left foot). Lean your torso forward a little bit and reach your hands forward and down, as though you were starting to reach for something in front of you.

Now, keep your left foot firmly in contact with the floor as you pull the left foot towards the wall behind you. The foot won’t move. What does that do to your torso, hips, and right leg?

For most of us, it will move the torso and hips over the left leg and it will bring the right foot to meet the left leg. You “pulled” yourself into a standing position.

This is the same action that occurs during a deadlift. Your pelvis is being pulled forward using the muscles in the back of the pelvis and posterior chain, aka the gluteal muscles and the hamstrings.

In fact, research that looks at EMG activation, a surface imaging technique that measures the electrical activity of skeletal muscle, shows higher activation of the gluteus maximus during the straight leg deadlift and single leg deadlift than of the hamstrings.1,2

This doesn’t mean the straight and single leg deadlift don’t work the hamstrings at all, it just means the glutes work a little bit harder to move your pelvis back to the starting position.

Now, let’s look at the action of the squat. Come into the same position, with your left foot forward and your right foot back, but this time, keep the right heel off of the ground and keep your torso right over your hips. Your left knee will still be bent and your left foot will still firmly be in contact with the floor. Press the left foot straight down into the floor. What happens?

Your left knee will straight and your head will move straight up towards the ceiling. Your torso won’t change position very much. How does that feel?

This more closely mimics the squat position, which is characterized by the torso staying fairly vertical over the pelvis, the shins moving forward of the ankle, and and the torso and pelvis moving back. Instead of the foot pulling the pelvis forward, the foot pushes down to move the body straight up.

The difference in leverage means the muscles work differently to do this action, though the gluteus maximus still remains a key player. The main difference is the muscles associated with pushing are the quadriceps instead of the hamstrings. Research has looked at different torso position during a squatting exercise.3

The researchers found when the torso was flexed to 30 degrees, hamstring recruitment went up and quadricep recruitment went down, which should make sense when you think about the pushing and pulling actions—the more forward the torso, the more work it is to pull it back over the pelvis.

If the pelvis is internally rotated, the tibia is in internal rotation, and the foot is everting and pronating, the femur will be internally rotating as well, which means it will look like the leg is pointed relatively straight ahead. This is what happens during the lowering down phase of a single leg squat—a series of subtle rotations inwards.

The reverse is true when the knee begins to extend during a single leg squat. Everything rotates just a little bit externally, including the femur, again, giving the illusion that nothing has changed and the leg remains straight ahead.

It shouldn’t be a surprise, then, that during single leg squats, in addition to lots of muscle activation in the gluteus maximus, quadriceps, and hamstrings, the gluteus medius also works noticeably hard to create the right amount of stability and movement.4,5

It’s a balancing act, literally and figuratively, between the muscles in the glute region, the muscles in the torso, and the muscles in the rest of the leg to accomplish the act of standing on one leg and moving, repeatedly, without falling over. (There are other factors at play, too, but I promised myself I wouldn’t talk about the brain during this article, so strict muscle talk it is).

Altering foot position during a regular squat can also increase muscular activity in the gluteus medius. If you change the position of the bones, you change the way load is received from the skeleton, which means the muscles will be loaded differently. 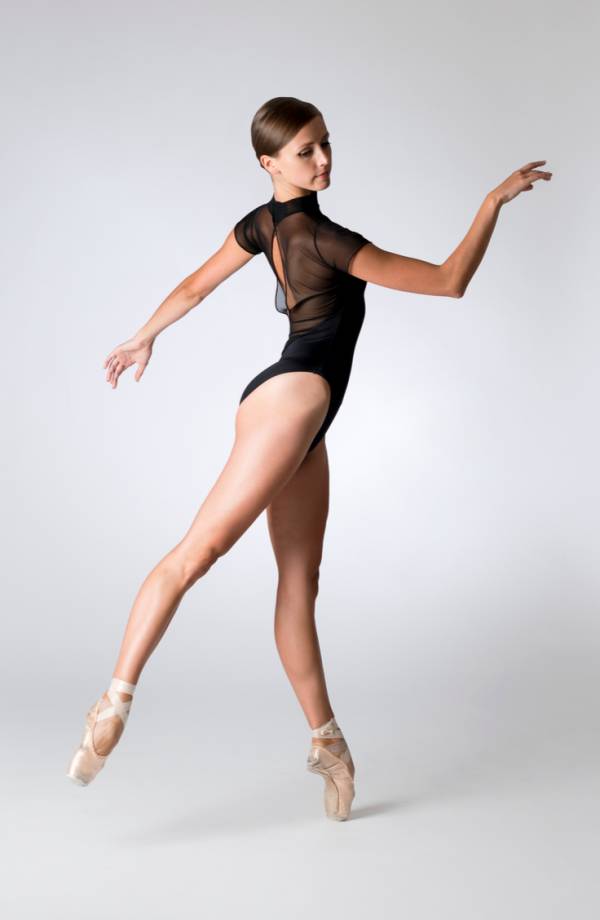 Let me interpret all of that technical jargon for you. When you place the heels together, turn the toes out, and lift up your heels coming on to your toes, the muscles in your bottom, inner thigh, outer thigh, front of the thigh, and calf work really hard to support you. If instead of lifting up your heels, you bend your knees, keeping the knees pointing over the second toe, those same muscles continue to work really hard.

Don’t worry. I am not suggesting you give up the weight room in favor of a barre class. However, if your goal is to load your peaches in a variety of ways, embracing horse stance or sumo squats might not be a bad idea.

The gluteus medius and minimus (along with other muscles), are also well positioned to move the femur into internal rotation which, as I mentioned above, occurs when you walk.7 If you rotate at all by changing directions, you need internal rotation to control the changing position (8). What this means is don’t just do sumo squats or Cossack lunges- play with curtsy squats or bowler squats once in a while to maintain strength and mobility during internal rotation.

It is easy to get into the habit of only working your legs one way. However, the strength and mobility of the hip joint is dependent upon the femur being able to withstand load in a variety of positions.

Take the time to assess what positions you struggle with and ask yourself why are you stuck. Is it a mobility issue? A motor control issue, i.e., you just don’t know how to do it? Or is it something else? You can’t seem to control your pelvis position or your foot position? Be honest with yourself and begin addressing your sticking points for a fully functioning, powerful derriere.

For different squat ideas, check out the video above. You will notice my leg is working hard to stabilize because of the surface I am on- that’s okay. In the gym, on a hard, flat surface, I have a lot less knee play.

One of the benefits of strengthening the hips in a variety of ways is the tissues can tolerate controlled knee valgus because the muscles in the hip are strong. Training for tissue resilience and motor control intelligence makes new environments a lot less scary and more interesting.