Fast-forward to today’s fitness landscape and fortunately all types of people are learning the benefits of the deadlift. From high-level athletes to grandmothers, it seems like all are seeing the results of learning how to properly hip hinge and not lift with their backs.

Of course with the popularity of the deadlift returning stronger than ever, the question arises, “What is the best type of deadlift?” Since there are so many variations, it can be overwhelming to think about the answer to such a question. In my mind, though, it is a rather easy question to answer.

Having performed every possible variation, the “right” type of deadlift stands out strongly to me. From what I have seen, nothing beats the one-legged deadlift. This isn’t going to be one of those “we do most things on one leg, so we should lift on one leg”debates.

I am not claiming such a thing just because I am awesome at it and I want to be cool. In fact, I am far stronger in the more standard deadlift variations (i.e. sumo, conventional, and trap bar) than the single leg deadlift.

Ever since tearing all the ligaments in my right ankle when I was fourteen, my nemesis to a great degree is true single leg exercises. So when it comes to the “right” deadlift, why in the world would I not pick some old-school variation instead, or at least some type of deadlift that I can impress the heck out of people with?

After all you probably aren’t going to be able to brag on social media about your single leg deadlift record like you could do on a big-numbered conventional deadlift. “Top Single Leg Deadlift” boards aren’t likely to pop up in gyms (although you never know).

I know, put the pitchforks and torches out! Let me explain. It is important to distinguish a movement from an exercise. In this case, a deadlift is a hip hinge, but a hip hinge doesn’t have to be a deadlift. Therefore, our goal always is to refine and challenge the movement pattern.

In deadlift variations like conventional, trap bar, or sumo, we can compensate many different ways. We can cheat on our form and still use brute strength to lift a weight poorly. In doing so, we lose much of the essence of the movement. We lose the true goal of the movement and become singularly focused on the load.

So? Big numbers rule! I can hear the grunting and chest bumping as we speak. One of the biggest issues with focusing on load in training is that we get a false sense of strength. We can lift big loads in the gym, but when it comes to being athletic and strong outside of the gym we mysteriously fail – and badly. We really aren’t developing the functional strength we think.

Real functional strength is designed in addressing how the body actually works. “But, Josh, we deadlift every day in life. That’s functional,” you say. That is true to a degree, but we often forget a few key factors. First, very few times do we get to be in that perfect deadlift stance when we lift something from the ground. Second, rarely does an object move in the perfect line up our body.

Let’s look at something as simple as tire flipping. Usually there are two schools of thought on how to tire flip. Some will get on the balls of their feet and drive at an angle into the tire. Yes, it is a deadlift, but not being flat-footed does change the dynamics of the pull greatly.

The flat-footed group (usually myself) can’t just deadlift the tire as the tire is actually not going purely upwards like a barbell, but rather at an angle. This is why some people hurt their backs, because they try to perform a pure deadlift on the tire. In either case the deadlift is far from your ideal stance or transition of weight. 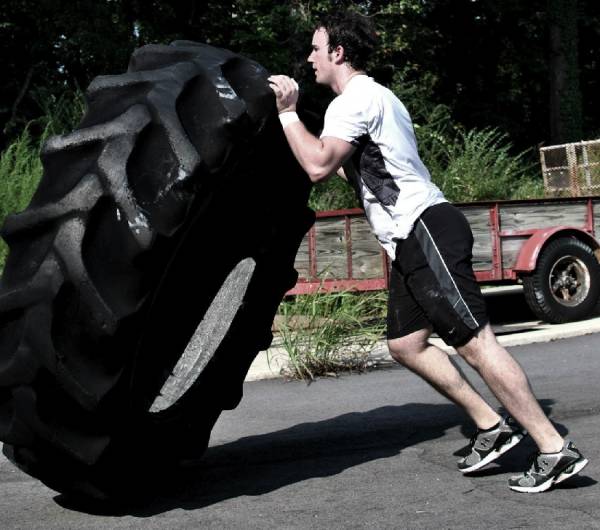 “Yea, that is tire flipping. So what?” Let’s look at little deeper at why I brought this up in the first place. Movement is not a muscle or a simple group of muscles. Rather movement is made up of a complex interplay of many muscles and fascia. In a previous Breaking Muscle article I spoke about these sling systems in detail.

Looking quickly at these different sling systems during a single leg deadlift, we see that all of them are being stressed to a high degree and the way our body learns to connect to these chains is being challenged. Something we simply tend to overlook in most other deadlift variations.

During the performance of the single leg deadlift we see how these deficiencies show themselves. Some people cross their rear leg over the midline, rotate their pelvis, and show other forms of compensations in the lateral system. Rotation of the trunk and flexing of the upper and/or lower back along with some other cheat mechanisms can be related to issues in anterior and/or posterior oblique systems.

“That’s nice, Josh,” you say. “But who cares?” In a very simple way of putting it, if you focus on such things as the sling systems and the single leg deadlift, you will become much stronger and injury resistant in the more stable and conventional forms of deadlifting.

Conversely, being strong at the single leg deadlift by only using the more popular forms of deadlifting is rare. Yes, there are those out there where this is true, but they are the exceptions, not the rules.

Building Up to the Single Leg Deadlift

In the video below I will break down some important and easy ways of incorporating the single leg deadlift as a core exercise for your programs:

Josh Henkin is a CSCS and Master RKC with twenty years of experience. His innovative Dynamic Variable Resistance Training (DVRT™) has allowed him to present in more than 13 countries and publish in top outlets like Men’s Health and the Wall Street Journal. Josh has coached people of all backgrounds, including the U.S. Army Special Forces Recruiting Battalion and U.S. Marines. You can learn more about his programs at DVRTFitness.com.