The quadriceps (quads) is the group of four muscles at the front of the thigh. The hamstrings are three muscles at the back of the thigh. These two muscle groups work in opposition to each other, though they tend to have a dysfunctional relationship. The quads don’t call often enough and when they do the hamstrings don’t pick up the phone. They are supposed to work together as partners in the anatomical dance known as reciprocal inhibition. It is a two-step – the quadriceps must shorten for the hamstrings to lengthen, and vice versa.

All too often this fails to happen. An extreme case of this failure results in a pulled muscle, and the hamstrings are one of the most commonly pulled muscles. I see this essentially as a postural issue – most people stand in such a way that their thighs lean forward, which puts a lot of pressure on the quadriceps, filling them with tension (as shown on the right side of the picture.) Forward-leaning thighs are forced to work to hold the body up – a job that is way above their pay grade. Forward-leaning thighs also pull the pelvis under into a tucked position that can chronically shorten the hamstrings. Oh, the conundrum!

The three hamstring muscles – semitendinosus, semimembranosus, and biceps femoris – all have their origin on the ischial tuberosities (sit bones) at the base of the pelvis. They all insert on the lower leg, with semitendinosus and semimembranosus connecting to the tibia, the larger of the two shin bones. Biceps femoris attaches to the fibula. They all flex the knee and extend the hip, except for one of the heads of biceps femoris that has no role in extension. 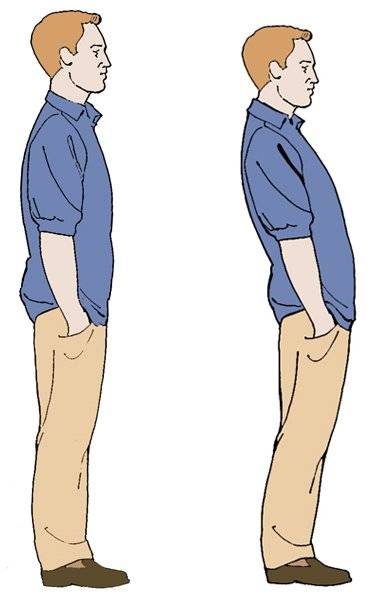 The quadriceps are the vastus medialis, vastus lateralis, vastus intermedius, and rectus femoris, the muscle that bears most of the brunt of the forward-leaning thighs. The rectus femoris is the only quadriceps muscle that attaches to the pelvis, with its origin on the ilium. The vastus all originate on the femur according to their names: medialis on the inside, lateralis on the outside, and intermedius at the front of the bone. The four muscles that make up the quads all meet to form a common tendon and insert on the tibia. The vastus muscles all extend the leg at the knee. The rectus femoris does this as well, but it also flexes the thigh at the hip. 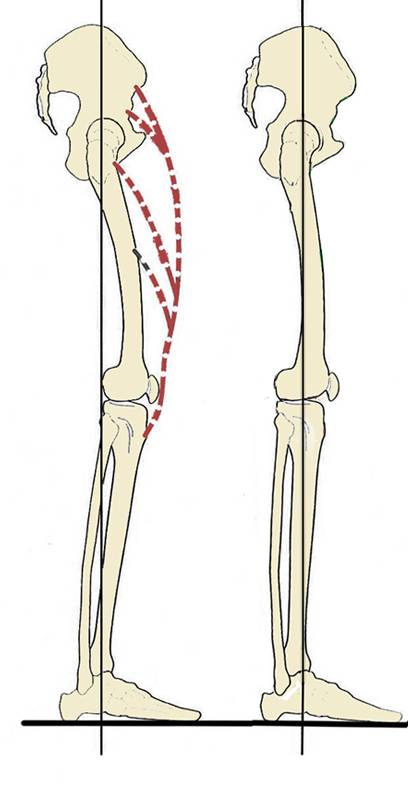 Your Tucked Pelvis and How to Fix It

My take on posture is pretty simple. I think the quadriceps tend to be both overly long and full of tension, while the hamstrings tend to be too short and tight. An overwhelming number of people tuck their pelvis during all activities. The tuck of the pelvis draws the sit bones down and forces the femur bones forward. (As shown on the right side of the picture.) The sit bones being drawn down shortens the hamstrings and the femurs pushing forward stretches the quads. It also forces the quads to bear the weight of the upper body because with the pelvis no longer aligned on top of the thighs, a person’s weight can’t transfer through the bones from the spine to the legs.

To help fix all that, I would like to share with you one of my favorite exercises (learned from yoga teacher Jenny Otto many years ago) – block lunges. This simple exercise is the best possible therapist the hamstrings and quads could ever hope to find. 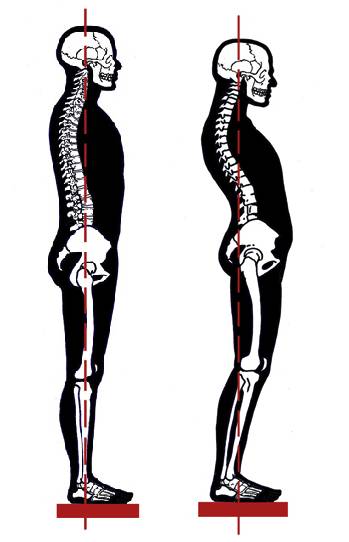 Proprioception is the awareness of our movement and spatial orientation generated by stimuli within the body. Proprioceptors communicate with the body to determine both our position and our actions. One proprioceptor is the muscle spindle that is a stretch receptor – it tells the brain how much a muscle could or should stretch. The Golgi tendon organ is a stretch inhibitor – telling the brain to stop stretching a muscle because it has reached its limit.

Block lunges are a fairly passive exercise. The block is placed under the thigh just above the knee so that the block is situated under the tendon, sort of tricking the golgi tendon organs into allowing the quadriceps to lengthen more than it usually might. This is a bit like self-rolling the quads.

When we mush the quads in this position they will eventually stretch. As they lengthen, the thighbone moves backwards allowing the hamstring to move closer to the femur. Stepping back after the first side you might be amazed at the new found space you feel in the hamstring muscle. When I teach block lunges in yoga classes, a majority of the students usually laugh in shock at the result.

How to Do Block Lunges

This pose is a release of the quadriceps, hamstrings and the psoas major. You’ll need three blocks for this.

If you think that this exercise is for you, you will need to do it every day for a few weeks at least. It is a cumulative exercise that takes hold with repetition. The quadriceps and hamstrings are stubborn partners that resist change, but a little bit of love from block lunges can go a long way towards healing the divide.

Jonathan FitzGordon is a yoga teacher and the creator and founder of Core Walking, a program designed to teach a natural walking technique that has been highly successful in alleviating pain, enhancing athletic performance, and improving quality of life. His yoga classes and the program are imbued with the love of anatomy and the moving body. Core Walking has been featured in the New York Times and on Good Morning America.

The CoreWalking Program was born out of Jonathan FitzGordon‘s personal and professional experience with changing the body’s habitual movement patterns through self-awareness and repetition. The program’s philosophy rests on the rock-solid belief in our ability to change and evolve as we age. Jonathan learned this first hand. After stubbornly suffering through three knee surgeries and repeatedly re-injuring himself, Jonathan decided to step back a take a good look at how the body works. Injury free these many years later, the walking program aims to help people age gracefully and live pain free lives.

Jonathan has been practicing yoga since 1995 and has been teaching since 2000, having studied with some of the yoga community’s leading teachers. He owned and operated the Yoga Center of Brooklyn from 2001 to 2009 and created the CoreWalking Program in 2005 because walking is something we all do and walking correctly is an amazing way to bring positive change to our ageing bodies.