You’re Going to See This Again: Fitness Trends Are Talking and You Need to Listen

The fitness industry is giving us some real clues right now, but are you paying attention? Bodyweight and movement-based training are trends for a valid reason.

Back in the days when I used to get to play with guns a lot, I would often hear the phrase “You’re going to see this again” come out of the mouth of one of my sergeants. That was my cue to quit daydreaming about having more than two seconds to scratch myself, write down what he said, and pay attention. That cue let me know that I would either need to know this information to survive (i.e. avoid being blown up) or for a test.

Wouldn’t it be simple if life did the same for us? Gave us these little repeated cues that we were engaged in something we were definitely going to need later on?

I believe life does, but the problem is that it gives us these clues when we are too young to be aware of them. The current movement of the fitness industry is giving us some clues right now, but are you paying attention?

The big trends in the fitness industry right now are bodyweight training and movement-based training. They could even be realistically thought of as the same thing, but maybe two sides of the same coin – one is strength, the other mobility. Interestingly, that dual relationship is found within the Hardstyle RKC system as well as in many traditional martial arts. There’s a clue right there. When something has been around for thousands of years and is still practiced en masse you should have a look at why.

Let’s break this down further. Many of these movement-based systems are based on what we did as children – the so-called primitive patterns. In many cases, such as when we use the FMS and Primal Move, we deliberately take people back and practice only these early developmental movements. We see staggering gains in ability almost instantly.

A few years ago I was working with some very talented volleyball players. Like, play on the professional beach circuit good. But some of them were missing some basic athletic movements. Like a guy who could jump high enough to touch the top of the antenna out of the sand (about a three foot jump), yet couldn’t skip. I’m not talking about any fancy double under crazy stuff either. I’m talking about plain old skip like a kid on your way to class. And the more I looked around the more I saw that most of the players had a serious deficiency in the way they moved.

That made things difficult for me, as they were paying me to make them faster and jump higher. I’ve kept this a secret for a while now and hopefully the statute of limitations is out and they won’t come jumping after me, but I didn’t do any actual speed training with them. We did some strength work, so their vertical jumps all increased, but when it came to speed work we did nothing. Zip. Zero. Zilch. Nada.

But they all were faster than ever.

I treated them like I would six year olds. I don’t mean that we played duck-duck-goose or had nap time after training, what I mean is that I did exactly what I would have done if someone came to me and wanted me to help their child athletically. 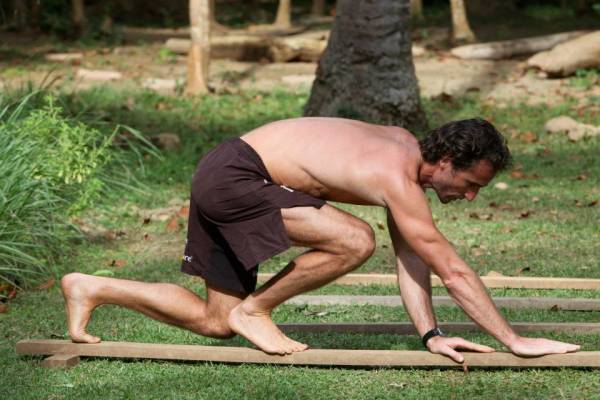 I taught them how to move. And if you look at the direction of the fitness industry you can see the exact same clue being shouted at us again and again and again. We see guys like Gray Cook and his Functional Movement System. You see MovNat with Erwan Le Corre. You even now see these guys together going through how moving well should be our first priority. Primal Move is all about playful, childlike, graceful movement, too. And when you listen to top training minds talk about lifting, there’s as much focus on good execution of the lift (movement skill, albeit loaded) as there is programming. Events like Spartan Race have gone from five hundred participants in their first race in 2009 to a quarter million entering their events in 2011. Why?

Because movement is the thing that counts and we are hard wired to enjoy full body functional movement.

The cues are there, staring us squarely in the face. But the modern fitness industry is really good at reinventing itself. We all know functional training is the next big thing, right? We all train whole body movements and we use TRX, kettlebells, or maybe even that dopey ViPR thing, because they’re functional, right?

But how many of us are worried about how we do our reps, instead of how many reps we do? Did we take our old school bodybuilding ‘go hard or go home mentality’ and just start using new implements? Gray Cook states that the tool you use or the manner in which you use it doesn’t make you functional – it’s whether or not it makes you move better as a result.

The FMS allows us to screen people before and after training to make sure we’re on the right path. Primal Move has the Primal Flow Evaluation, which we do before and after to check and make sure that we actually got better from training, not worse. If we’re not concerned about our movement quality, then we’re doing it wrong. That’s not functional training, because the goal of functional training is to help us move better. Ian King has repeatedly said how the modern sedentary lifestyle is ruining our kids’ athleticism by not forcing them to discover their environment and move more.

When I look at all the common threads – that so many smart minds like King, Cook, Le Corre, and Lakatos are all moving in the same direction, that even some of the best athletes I’ve trained needed movement-based training that centered around childhood development, and that events such as Spartan Race are focused on efficiently moving the body – then the message is clear to me.

You will see this again. We need to be worried about movement first and foremost. Our mantra shouldn’t be, “I’m going to move as much as I can and hope that I can handle it.” Instead, as Cook says, it should be “move well, and then move often.”