If you’re reading this, you’re probably curious to know how you can use data to increase muscle size. Many of you may be familiar with VBT (velocity-based training) as a means to autoregulate training loads and provide visual feedback during speed and power sessions. But that’s not all velocity can do. There is good evidence that velocity can be effective in providing instant feedback during hypertrophy training sessions.

Let’s look at two ways we can use velocity data to promote muscle growth (and a third way that doesn’t require a monitoring tool).

In theory, percentage-based loading is great. You test your one-rep max (1RM) and presto, you can pinpoint exactly what load to use based on a certain percentage. Unfortunately, percentages don’t stack up to reality. In reality, a successful lifter adjusts on the fly based on feeling. Less experienced lifters, though, will likely try to stick to the exact percentages and the exact 1RM that was tested eight weeks ago even if it’s not the best thing for their progress.

“Many coaches and athletes are using velocity to gain strength and power, but even at those high levels of sport, there are times when hypertrophy is important.”

Using velocity may just give you the objective insight you’re currently lacking. For certain exercises, the research is quite clear – there’s a high correlation (0.98) between a relative percentage load and velocity.1This means that if you want to train at 80% of your 1RM, there will be a corresponding velocity output.

This isn’t a fluke either. In one study, over 100 strength-trained subjects performed a 1RM bench press test while researchers measured their movement velocity. Take a look at Table 1. For each percentage you’ll notice an associated velocity output. Just to make sure this wasn’t due to chance, the researchers retested the subjects at a later date and there was no difference between the two sessions. 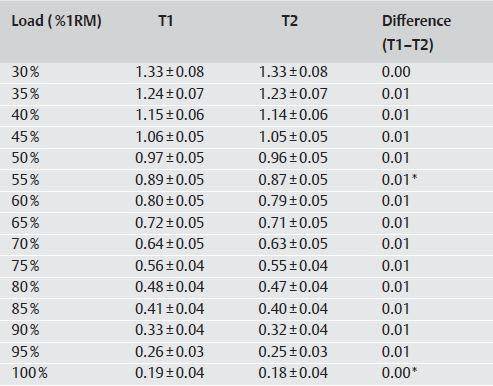 For those using velocity-based tools like the PUSH band, this is great news as it allows you to pinpoint exactly what velocity you should be working with depending on the relative load your trainer prescribed.

For example, say you performed a 1RM test (or an estimated test) for the bench press and it turned out to be 120kg. Now let’s say your coach has asked you to train between 75-80% (look at Table 2) of your 1RM – that load corresponds to 90-96kg. In week one, this may be the appropriate load, but what about weeks two, three, and four? Your 1RM will fluctuate and that 96kg may no longer be 80%.

So, let’s do this instead: Look at Table 1 again and find the velocity that corresponds to 75% and 80% – it’s 0.48 to 0.56. Now, when you perform your first working set and the first few reps are around the 0.7m/s mark, you’ll know it’s time to move up in weight. Simply adjust the load until you find the appropriate weight for that intensity and that session. Note: you must always look at the first few reps of a set, especially during a hypertrophy program where velocity will drop off across a set.

“Unfortunately, percentages don’t stack up to reality. In reality, a successful lifter adjusts on the fly based on feeling.”

Table 1 is a bit misleading, though, because it only reflects the bench press exercise. Each exercise will have a different velocity-load profile. That’s why you may have to create your own individualized profiles for your big lifts (until research catches up to those of us ahead of it). This can be done through a submaximal 1RM test using a velocity-based tool, which will allow you to create a load-velocity profile for any exercise.

With velocity tracking, we can still ensure we’re getting enough of a stimulus to generate the desired training response without killing ourselves in the process. For example, aiming for a loss of 60% too often could spell disaster, while mixing in losses in the 40-45% range could be just right. 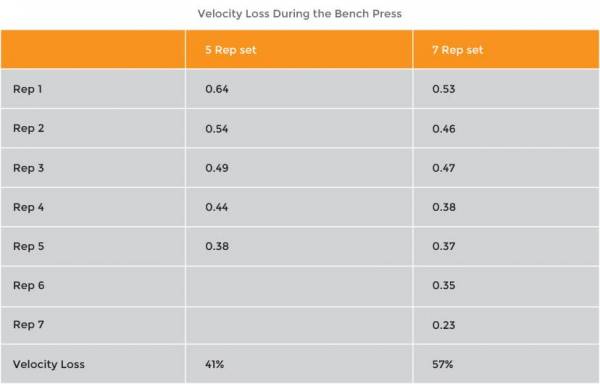 Looking at the table above, you’ll notice that in the 7-rep set, the athlete was close to that 60% drop in velocity while in the 5-rep set, there was a 41% drop. In these two cases the absolute load was similar, but in the 5-rep set, the individual probably had 2-3 reps left in the tank. Even without going to failure, there is still a good training effect when aiming for the 40% mark instead of the 60% mark, and it may help your subsequent training bouts.

The biggest and strongest athletes all have one thing in common when it comes to their programs. High training loads. This means that monitoring volume is extremely important. There are various metrics that will allow you to monitor volume but my favorite is still volume load (or tonnage). To calculate this metric, all you need is basic multiplication skills:

Example: I perform a back squat for 3 sets x 5 reps at 100kg, 120kg, and 140kg. This case is a little trickier as you have to multiply the reps by each load and then take the sum:

Figure 1 provides an example of what volume load would likely look like over time. Quick tip: it’s impossible to expect to increase volume load lifted in a linear manner. That’s why you’ll see in the example that volume load has decreased in the last three weeks. This athlete was actually tapering (i.e. trying to peak for competition). 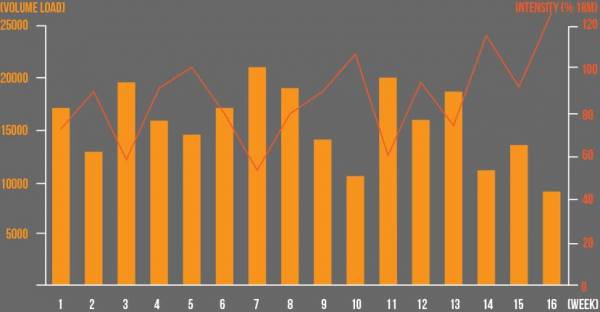 The goal would then be to add volume load over the course of the week, month, year, etc. Almost all sport scientists will agree this is crucial for increases in size.

Many coaches and athletes are using velocity to gain strength and power, but even at those high levels of sport, there are times when hypertrophy is important. Knowing exactly what loads to use based on a specific velocity and the drop in velocity across a set are two sure ways to promote muscle growth while avoiding overtraining.

And whether you have a velocity-based tool or not, monitoring volume through tonnage is simple and effective. The Eastern bloc countries were doing it before computers were invented, so I’m sure you and I can spruce up on our multiplication skills and try it as well.

Matt is currently the Lead Sport Scientist at PUSH. Over the last two years, he helped a bright team of engineers and designers develop a wearable device that helps coaches, athletes, and everyday exercise enthusiasts reach their training goals.

Recently, Matt’s focus has been on educating users on the benefits of velocity based training - a method based on autoregulation, which helps individuals adjust strength-training loads both on a micro and macro level to ensure proper progressions while also diminishing their risk of injury. He’s also working with researchers around the world with the aim of incorporating PUSH’s technology in order to improve human performance.

Matt completed his MSc degree in Strength and Conditioning from the University of Edinburgh in 2012, where he concentrated his research on the ability to increase power and speed through plyometric training. While in Scotland, Matt coached Scottish junior tennis players, many of whom were European champions. He also competed at both the national and international tennis stage.

Prior to joining the PUSH team, Matt was a WTA (Women’s Tennis Association) strength and conditioning coach and also worked with a number of young athletes across a variety of sports both at the collegiate and junior levels in Toronto, Canada. He continues to develop young athletes by bridging sport science with technology.