Ever wonder if what you’re doing in the gym is eliciting the physiological response you’re looking for? Yes, reps, sets, and percentages based off your 1RM can guide your training goals, but they’re not as accurate as you may think.

In this post, we’ll look at a new way of tracking your workouts – velocity based training (VBT).

VBT uses velocity as a biometric feedback tool to gauge your weight training on a day-to-day basis. More specifically, velocity output helps dictate how much load you should be adding or removing on a particular set, or if you should move on and try a new exercise altogether. It’s a similar concept to heart rate training zones – stick to a certain training zone and reap the physiological benefits associated with that zone.

Before we get into more details, let’s take a quick look at how coaches traditionally prescribe training loads – and how this could be hindering your progress.

With the rise in popularity of so called “performance facilities,” many people are now familiar with the term 1RM (one repetition max). In theory, it’s great. Measure your 1RM, and use established percentages of that 1RM that correspond to a specific training goal.

Note: These parameters may vary depending on the source.

But from a practical perspective, unless you’re establishing daily 1RMs (either through a sub-max test or predicted 1RM), training at a specific percentage of your 1RM may be flawed. Let’s take a quick look at why this might be the case.

4 Reasons Why PBT Is Impractical

1. Time – It takes a significant amount of time to perform a 1RM test and most people don’t have additional time (on top of their current training programs) to spare. If you truly want to be precise, you’re going to have to test every exercise because it’s difficult to estimate your 1RM for multiple exercises based off of one. Example: even two exercises as similar as a back squat and a front squat will have different 1RMs and should be tested individually.

2. Daily Fluctuations in 1RM – Have you ever noticed some days you just can’t lift as much as other days? On Monday, you reached 315 for triples on your back squat, but on Thursday, you could only get up to 285. No need to worry, this is normal. It takes a significant amount of time for your neuromuscular system to recover and adapt from a heavy lifting session. If you’re using a PBT approach, your loads may only be accurate for your Monday session, but surely won’t reflect what you could lift the rest of the week.

RELATED: Why You Should Never Hit a 1RM Again

3. Poor Accuracy – Unless you’ve been lifting for many years, chances are you won’t have the ability to push your body to your true 1RM. I see it all the time: an athlete can do triples for 300 but can’t do a single rep at 310. Psychologically, the load just feels too heavy, even though the body’s capacity could probably get him or her to 310 (or possibly more).

4. Injury Risk – If you don’t regularly lift heavy loads, there may be too much stress placed on the musculoskeletal system, increasing the chances of injury both from an acute and chronic perspective.

Take a look below at Figure 1. This is your traditional force-velocity (F-V) curve, perhaps the cornerstone of strength and conditioning. The F-V curve states that when force increases, velocity decreases and vise versa.

If I throw a baseball, because it’s a relatively light object, I don’t have to generate a lot of force to release it out of my hand and project it into the air. This means the velocity will be quite high. In contrast, if I were to perform a heavy deadlift, I’d have to generate lots of force to lift the weight. This would likely result in lower velocities than when compared to throwing and running.

“From a practical perspective, unless you’re establishing daily 1RMs (either through a sub-max test or predicted 1RM), training at a specific percentage of your 1RM may be flawed.”

Additionally, if we take a closer look at Figure 1, we’ll notice at each point in the F-V curve, there’s an associated training quality. Each of these qualities corresponds to a particular velocity zone. These values may vary slightly from one individual to the next, but they provide a good framework for athletes, coaches, and weight training enthusiasts. 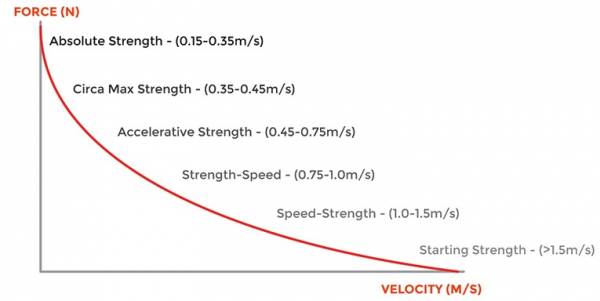 Note: These velocity zones are all expressed as averages (i.e. the average concentric velocity).

Using velocity to regulate loads isn’t a new concept. Many professional and collegiate strength coaches have been doing this for years. Why? Because it’s a form of autoregulation. Meaning instead of sticking to a prescribed rep and set scheme for an entire month or more of training, coaches adjust loads, reps, and sets on a daily basis. This form of autoregulation helps coaches target specific qualities and decrease the chances that their athletes will overtrain. We’ll look at two examples to bring this point to light.

Jordan is trying to increase his upper-body strength while at the same time gaining some size. According to Table 1, this corresponds to accelerative strength/hypertrophy. His program calls for a rep range of 6-8, so by using velocity as a feedback tool, the zone he should try to stay in is 0.45-0.75 m/s (See Table 1).

On day one, after his warm up, Jordan performs 8 reps at 215 in that velocity zone. He feels good and does another couple sets of 215 until he reaches his fourth set and can no longer maintain his velocity. Instead of doing a fifth set, Jordan decides to move on to another exercise.

Why? Because performing more sets at a lower load or at a lower velocity may hinder his improvement rather than facilitate it. The following week, Jordan performs his first set again at 215, but he consistently hits velocities that are above 0.75m/s. Jordan increases his load by ten pounds and performs as many sets as he can while sticking to the desired velocity zone.

Mike is a collegiate basketball player looking to increase his vertical jump. Research suggests increasing your velocity at takeoff will result in a higher vertical jump. According to the principle of specificity, the body will adapt to the specific demands imposed on it. 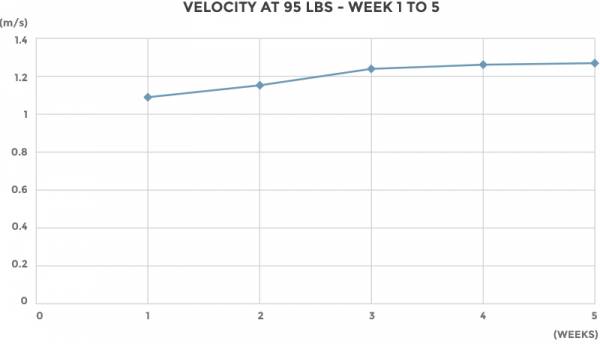 The rep and set schemes may change based on the velocities each week and at some point, Mike will plateau. By then, Jordan would have increased his vertical by 3-5”.

RELATED: 2 Skills You Need for a Better Vertical Jump

There are different ways of using velocity to help regulate training loads but the overarching, take-home message is the same regardless of your methods. Using a tool like velocity can optimize training to target specific qualities that will promote two important elements – speedier progressions and healthier (non-overtrained) individuals.

Matt is currently the Lead Sport Scientist at PUSH. Over the last two years, he helped a bright team of engineers and designers develop a wearable device that helps coaches, athletes, and everyday exercise enthusiasts reach their training goals.

Recently, Matt’s focus has been on educating users on the benefits of velocity based training - a method based on autoregulation, which helps individuals adjust strength-training loads both on a micro and macro level to ensure proper progressions while also diminishing their risk of injury. He’s also working with researchers around the world with the aim of incorporating PUSH’s technology in order to improve human performance.

Matt completed his MSc degree in Strength and Conditioning from the University of Edinburgh in 2012, where he concentrated his research on the ability to increase power and speed through plyometric training. While in Scotland, Matt coached Scottish junior tennis players, many of whom were European champions. He also competed at both the national and international tennis stage.

Prior to joining the PUSH team, Matt was a WTA (Women’s Tennis Association) strength and conditioning coach and also worked with a number of young athletes across a variety of sports both at the collegiate and junior levels in Toronto, Canada. He continues to develop young athletes by bridging sport science with technology.