Progressing in the gym is pretty simple – just do more. If you lifted a given weight for five reps last time, do six this time. Or, just add more weight to the bar and do the same number of reps. The only thing that matters is progressively increasing the total load lifted over the workout.

The total load lifted is a product of how many reps and sets you do at any given weight. Just to refresh everyone’s memory: if you lifted 100kg for 25 reps (say as 5 x 5), then you’d have lifted 2500kg. You could then do the same equation for every exercise you did in that training session and add up your total load lifted for the entire workout.

The Problem of Progressing Bodyweight

But how do you progress when the load is bodyweight? And in particular how do you progress when the exercise has a large skill component such as with pistols or handstands? I always laugh when I see people attacking handstands by just randomly throwing their legs up in the air. That’s like walking up to a loaded bar and thinking you’ll be fine to snatch it, even though it’s double your current max.

Usually, people begin their handstand journey by following a couple of well-worn paths – beginning with exercises like headstands or beginning with doing handstand holds against a wall. But let’s go back even further and imagine that you are new to the gym and have your eyes set on being able to do a freestanding handstand. It’s a good goal, and one that will teach you many things about training in order to accomplish it. In other words, it’s a goal worthy of your time and leads to many other physical skills, while giving you plenty of core and upper body strength as well as good shoulder mobility.

The first step, and this will sound odd, is to start with crawling. Not for the benefits that are linked to your core, although those are a great reason, but because it will get you used to having a lot of weight on your hands. People fresh to training suffer at the beginning with many bodyweight exercises because they lack the strength and flexibility in their wrists to support their entire body weight. Crawling is an excellent way to get used to having your hands flat on the ground with a decent load on them.

The next step is a two-part deal. Like a chicken and egg sort of thing, neither is more important then the other, and you need to learn both. One of the steps needed at this stage is to learn where vertical is and how to stack your body. This is where headstands come in. Headstands provide a way to get all of your body lined up, but with a larger support area than you’ll have for handstands so the balance needed is much less. At the same time you need to be learning how to get tight and stay that way, and this is where hollow drills come in handy.

For tips on how get through these first steps I really like the Handstand One series by Gymnastics Bodies. Have a look at these two videos, too, which explain the hollow body position needed for handstands, as well as a demonstration of how it can be done in many positions to further teach body awareness. And yes, twelve-year-old gymnasts are far stronger than you – just deal with it now.

If you have Handstand One what you’ll quickly see is that the expectation is that in order to progress to the next drill you need to be able to hold each position for five sets of sixty seconds. And this is one of the real barriers to people starting down the bodyweight skills path, regardless of whether it’s a handstand, planche, or lever. Trying to jump from “barely can hold hollow position for thirty seconds” to “kicking up to a handstand” is like having a squat max of 50kg and seeing if you can do 150kg. While the injury risk isn’t the same it’s just not going to happen for you. 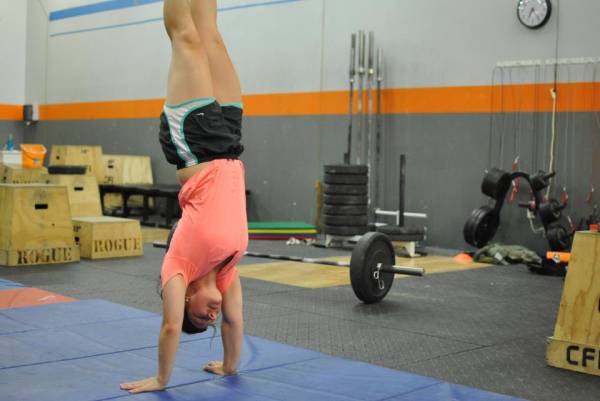 At this stage many give up. They see how many possible steps there are before a freestanding handstand and quit well before they get even close. Maybe they’re able to hold handstands against a wall for a period of time, and thus think that must mean they’re close to a real handstand. But there’s a big difference between a good hold against a wall and a freestanding handstand – and that difference is a little thing called balance.

While you’re on your feet, without you realizing it usually, you are going through hundreds of tiny balance adjustments. The reason you’re largely unaware is because this is a skill that you’ve practiced for many years and it is now second nature. Not so with standing on your hands, though. It’s going to take a lot of time to develop that feel for where the balance point is, learn how to stay tight so you’re not like a wet noodle, and to develop the hand strength to deal with it all.

It’s easy to get stuck at the point where you can comfortably hold a handstand against a wall, but not be able to advance from there. I know I’d been there for months. It wasn’t until I learnt some rebalancing drills from Ido Portal that my progress took off again. These drills are used to learn where the balance point is and deliberately come in and out of it from holds facing both into the wall and away from the wall. All during these drills I am working on my strength and work capacity in this position as well as alignment and wrist strength.

The video below shows one version of this. At the beginner stages you won’t get much of a hold and your reps will consist of learning to stay tight and use the hands to pull your entire body away from the wall.

The final nail in the coffin for many when trying to begin hand balancing is that these skills take a lot of time to develop. I currently do thirty sets of handstand drills five days per week in order to progress quickly. Even though my hands and wrists were in decent shape when I started this, they’re still adjusting to the much higher workload and I am guessing it will take a few weeks for them to adapt properly.

The next step will be to start working on getting into the balance point from a kick up, and I will introduce sets of that into my training. But it’s been a big step to go from five sets daily of the early progressions in the GB system to thirty sets. And there’s the real reason why you don’t see many people progress with bodyweight skills – they won’t train with the kind of volume and frequency they need to advance.

So, if you’re working on any of the harder skills, add more volume, even daily volume, and see what happens. It’s a long path, and for the harder skills it might be an even longer journey than massive totals in classic gym lifts. I’ve been told that a full flag is the culmination of up to three years constant effort for most. Enjoy the journey and soak up the lessons, because if you’re serious it’s a long haul.

If you have a bodyweight exercise goal, share it in the comments below. How is your progress coming? Have you stalled out?