Ever since man stopped struggling to survive and got to the point where there was enough leisure time in the day to play games, man has been trying to find an edge. From bull testicles to arsenic, and more recently steroids and EPO, as competitors we will leave no stone unturned to try to demonstrate our superiority. But one of the easiest ways to get extra performance is on the backside of training – in your recovery and nutrition post workout.

It’s pretty easy to see why companies spend so much time telling us sports drinks and various supplements are so valuable to our performance – in 2007 sports drinks sales alone in the USA accounted for more than $1.5 billion. With so much money at stake in the sale of supplements it’s hard to get solid information on what is optimal and what is just marketing hyperbole. I’m lucky to have been around for long enough to see many trends and opinions come and go as well as having the opportunity to see current research on the subject.

Keep in mind that the following guidelines are for endurance recovery, although they will work just fine for team sports too, and even workouts such as CrossFit, where significant fuel comes from glycogen.

The body’s glycogen stores are fairly limited, so the ability to resynthesize or replace glycogen is a critical part of recovery between events or even when training sessions are close together. In some cases this replenishment may need to be accomplished in just a few hours.

Another large part of the recovery process is rehydration. Losses in fluid levels of more than two percent of total body weight can lead to drops in performance of more than ten percent. In other words, if a 200lb man lost 4lbs of sweat his hundred-meter time would potentially drop from ten seconds to eleven. At elite levels that is the difference between making the final and not even getting out of the heats.

Glycogen restoration occurs in two phases post exercise. The first is quite rapid and without insulin, for thirty to sixty minutes; the second happens more slowly and in the presence of insulin. The presence of insulin is an important factor as glycogen stores can be replenished much quicker during this phase, while insulin sensitivity and glucose uptake are high. In fact, a study on cyclists found that glycogen synthesis was forty-five percent slower when a carbohydrate solution was used two hours post-exercise versus immediately after.1 So learn to refuel immediately post training, then take care of your other activities such as cool down, showering, etc.

There also seems to be a ceiling on how quickly the body can absorb glycogen, as well as how much it can absorb. At two hours post exercise, glycogen resynthesis peaks between 1-1.5g/kg. In comparison, during exercise researchers have found that no more than 0.7g/ kg was beneficial. This difference has led to speculation that rather than try to ingest a massive amount of carbohydrate post-exercise it would be better to take small amounts more often to maintain blood glucose and insulin levels.2 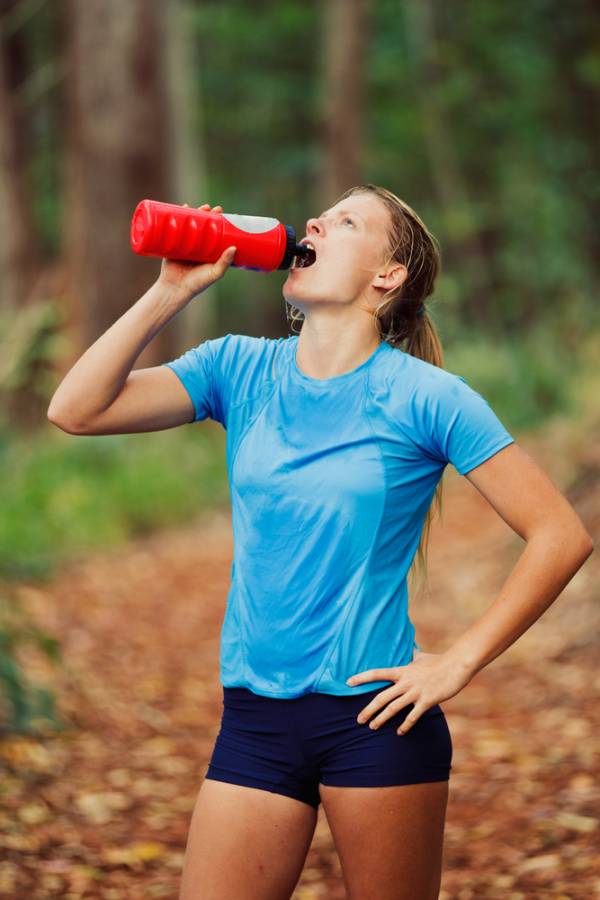 As any gym rat will tell you there is a huge reason to add protein to recovery drinks. Muscle loss, and with it lowered force production, are a real problem facing endurance athletes. As I wrote about here, elite athletes tend to understand the importance of this better than recreational athletes and deliberately ingest protein during their efforts. During recovery this becomes even more crucial as the addition of amino acids with a carbohydrate post-exercise has been shown to increase insulin response3 while at the same time lowering the risk of gastrointestinal distress.4

While it may just seem easier to eat a good quality meal post-exercise, preferably within the second window at the two hour mark, if a quick turnaround is needed then it will be impossible to digest this much food quickly. Additionally, because appetite can be suppressed for the first few hours post intense activity, it is best to look for a drink as a way to cover all your rehydration and glycogen needs.

The most effective post workout drink seems to include 0.8g/kg of carbohydrate and 0.4g/kg of protein along with electrolytes such as potassium, chloride, and about 0.3-0.7g of sodium per liter of fluid to help restore sweat losses and stimulate thirst.

While there is a current marketing trend to promote chocolate milk in this category I must warn you of what happens when you try to ingest any form of dairy during or immediately after intense or particularly draining bouts of exercise. Let’s just say the results are explosive and leave it at that.