Have you ever watched a nature show and seen the look in a shark’s eyes just before it eats the baby seal? That is the same as April Luu looks when she is on the start line of an obstacle course.

Have you ever watched a nature documentary and seen the look in a shark’s eyes just before it eats the baby seal? Have you ever seen any compassion shown by a lion as it brings down a gazelle? Nature has a way of showing no remorse for the weak or the slow. And the way that these apex predators look at their prey is the same way April Luu looks when she is on the start line.

I’ve met plenty of physically-talented athletes who never seem to get it all together and make the most of their potential. Then there are a rare few who are just as tough mentally as they are fast and strong physically. Sitting and talking with April about racing you can’t help but feel sorry for the rest of the girls on the start line.

April burst onto the scene at Spartan Race, winning two “beast” category races (21km each) over two days – a feat never before accomplished. After that, people started to take notice of her. Fast forward to now and she’s won nearly every race she’s been in – with a worst result of third – and is leading the women’s points going into the Spartan Race season finale in Vermont.

Initially drawn to obstacle course racing (OCR) because she found running boring, April says that it tests a wide range of athletic skills. “Trail running and flat racing you can just condition to perform one thing. I’ve seen a lot of good runners come to try OCR and fail because they lack the all-round strength you need to get through obstacles.”

So how does a personal trainer, group exercise instructor, and mom become the competitive animal she is today?

April actually has a unique history, being the first woman to ever be deployed to a Special Forces unit as a parachute rigger. Prior to her arrival at the 82nd Airborne, it had previously only been the domain of men. As anyone who has been in the military will tell you – if you’re a woman in a male dominated field you better be tough and capable, because they’re going to test you twice as much as they do the men. Perhaps it was the time in the military that helped her develop her tough mindset, later moving to 10th Special Forces Group before getting out when she discovered she was pregnant with her first child.

When I asked April why Spartan Race, she replied, “Spartan Race challenges you both mentally and physically – it is the ultimate human sport. Not to mention it’s exhilarating, gruelling, and competitive.” She went on to add that she had initially started OCR as a way to build up clients for her personal training business. That has actually become so successful that she now runs a program called “A Spartan Gives Back” where she trains three of her clients for a race and tracks their progress. 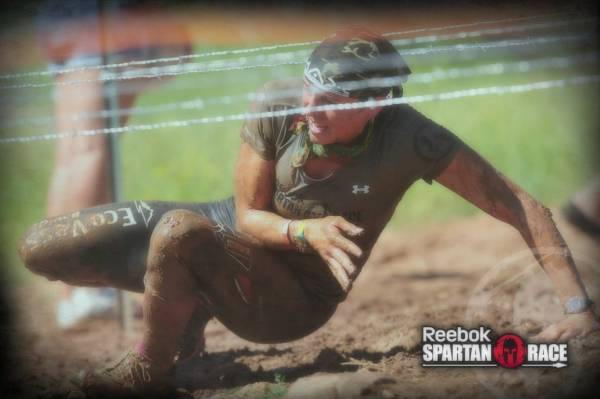 One of the things I particularly like about Spartan Race is that it is a race. You won’t find many fancy dress costumes on the start line – people are there to race. But it’s not just about fast times either. The race has a code of ethics they swear by and one of the tenets is that “a Spartan leads.” When you have your clients following you to crawl through the mud, under barbed wire and climb up ropes, you’re doing a good job of leading.

But what I was most interested in was April’s training. I’ve long held the belief that great athletes don’t do anything differently than the rest of us other than perform basics at a much higher level. And when we talked training her program was as simple as it needed to be without over simplifying anything. Her strength program consists of basics like deadlifts, squats, single-leg deadlifts, sled work, crawling, and pull-ups. 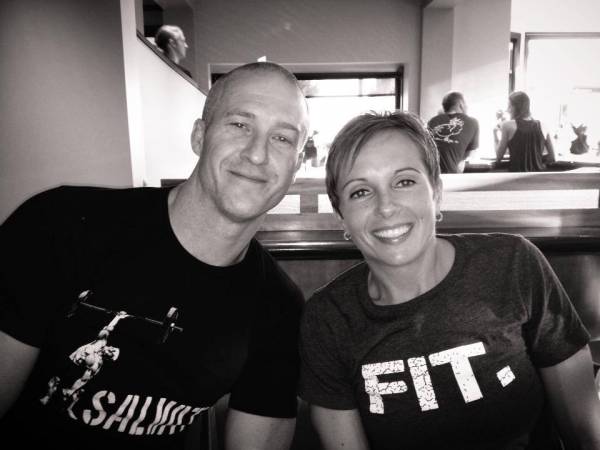 Having the opportunity to work alongside April at the Spartan Group X course in Salt Lake City, Utah a few months ago I was amazed at her strength-to-weight ratio. One workout saw us outside in the blazing sun doing a variety of bodyweight movements in a circuit. One of those variations was simple push up holds, but with the hold in the bottom position. (Thanks to Joe DiStefano for that evil piece of genius). We all started off on the hot asphalt but as the rounds increased the numbers that could handle the heat of the tarmac decreased. The holds themselves were getting tougher and tougher, but it was the insane heat of the ground that was doing people in.

All except April, that is. She just kept alternately laughing away or swearing and holding that insane position for the entire workout, while we all retreated to the coolness of the grass to continue.

April’s running program is no different to her strength plan. With two hard runs per week and a session climbing an insane incline where she lives at 7,000 feet while wearing a weight vest, she focuses on quality rather than quantity to get results. With a background in racing 800s and the 4x400m in college and high school, Aprial has a good history of quality running in her legs. These days she doesn’t do track training but she still has time targets for every single run.

In the week leading up to a race April focuses on rest, foam rolling, and eating clean. One of the things she is most careful of is making sure she can always perform at her best. I was impressed by the way she strictly handles her race schedule so that she can peak at every event. In these early days of OCR, I think there are a lot of talented racers giving away victories by competing too often and not recovering adequately in between races. April’s strength coach, Aaron Knutson of Max Performance, oversees the entire plan to make sure she is always at the top of her game. 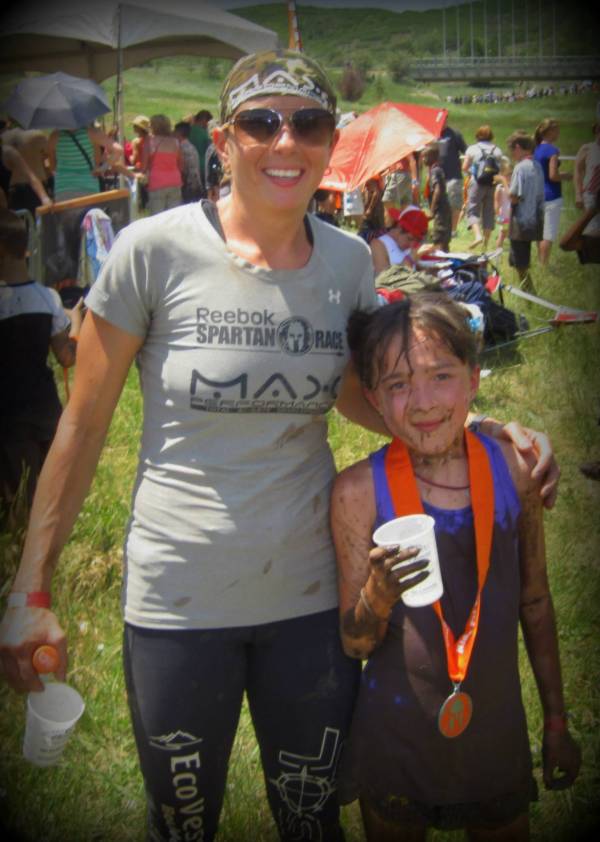 It would be easy when looking at April’s record to assume that she is just one of those lucky few who always nails it whenever she competes in anything. But things happen on the course and sometimes even the best stumble and fall, like recently when she took a bad spill in a race and recovered to come third, limping across the line. Speaking with her that week I know she was incredibly upset – not about coming third, but because the slip caused her to race well below her expectations. Said April, “I am always pushing my mind and body to its limits when I train. I have kids of my own and try to lead by example because they are always watching me. I know my weaknesses and work on them – that is the only way to get better.”

April’s mindset, and perhaps the reason for her success, becomes even more clear through these words that she shared with me: “Realize deeply that the present moment is all you have. Make the NOW your primary focus of your life.” – Eckhart Tolle

I’m pretty sure as Spartan Race grows, and the sport of OCR along with it, that we’ll be seeing a lot more of April Luu.