This week Andrew’s calves heal up and he ponders the true meaning of hardstyle training, the balance between anaerobic and aerobic, and how to best optimize training.

It’s been an interesting week.

This week was my return to being able to run again after tearing my calf on some hill runs a month ago. I also did a host of swim time trails to see how good my swim fitness is.

This is a good week to start running again as it’s also a recovery week. That means my legs are bit fresher as I’m riding less, which I was hoping meant that running again would be okay. My first trial run was fine, no pain or re-injury. The only issue is that a month off running, when I was only just getting back into it in the first place, means my calves are still not fully accustomed to it and they’ve been sore for two days. At least there’s no tearing and this is just normal DOMS from lack of running.

With all the reading I’ve been doing on HR training and ultra endurance events I can’t honestly see any reason why most amateurs spend so much time on speed/ anaerobic work. I know that certain segments will point to various studies stating intense training methods deliver better results, but I just can’t find any race results or actual proof of any of that working in the real world. The only people I can find who spend time on the faster, harder stuff are professionals who have a huge aerobic base built from years of previous training.

One of the interesting things I’ve been thinking about (well, interesting to me anyway) is that I’m training for an event that is nearly one hundred percent aerobic. The better I am at aerobic work, the better I will be at this caper. But I’m clearly doing strength training, too. Maffetone suggests no more than three to four anaerobic sessions per week for people like me (i.e. slow and not seasoned veterans of endurance work). I’m lifting for strength three or four days per week. In other words, I’m using up all of my available anaerobic sessions for the week just lifting weights.

One of the things I promised when I started down this path is that I would do what I said was the thing to do – so aerobic training it is for my sports skills of swim, ride, run and I’ll save my anaerobic efforts for the gym.

This has already paid off with my swimming. If you’ve read last week’s journal you’ll remember I talked about hypoxic swimming and what my hopes were for it. I actually saw two main benefits. One was that I’d get the aerobic building effect I was after. The second was kind of a secret.

This ties back to me doing too much anaerobic work, but I hurt my shoulder swimming hard 50m sets with paddles. This is another reason why the aerobic system is so important. Those teeny tiny stabilizing muscles around your joints? They’re slow twitch. All aerobic. Yet there I was ploughing up and down the pool with my paddles on, going all out on my sets. Do you think my shoulder stabilizers had enough fatigue resistance to handle the load I was putting them under? Maffetone is extremely clear that injury to joints during endurance training is nearly always caused by too much anaerobic work. Strength training and anaerobic training we’ve now learned are synonymous, and swimming with paddles was simply too much strength/ anaerobic work for me to cope with. 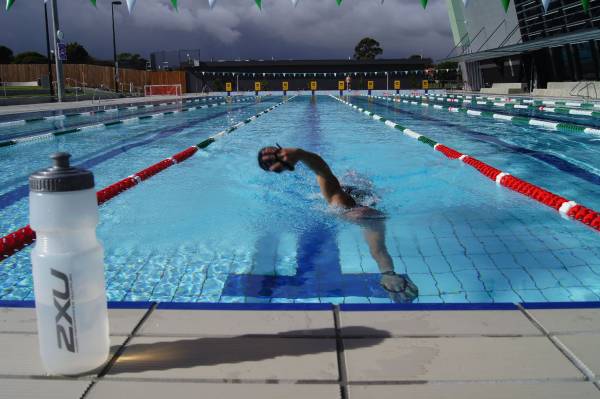 The hypoxic sets forced me to swim slower. That meant less stress on my shoulder. A couple of weeks of this hypoxic swimming has helped to heal it up naturally and it’s now almost one hundred percent again. Not only that, but on Wednesday last week I swam 2000m as 10 x 200m and all at my previous one-off pace or better. So not only could I swim faster, but I did it ten times in a row with only thirty seconds rest in between.

This aerobic training -the deliberate intent to train within my aerobic boundaries is paying off already. I’m curious to see what will happen with my running and riding soon.

The duality of strength training and endurance work makes me think of the duality of the RKC system too – of rigid and tight versus flexible and loose. We call it Hardstyle after a particular method of training used in the Russian military. I’m not a Russian soldier, nor do I play one on TV, but I’m betting that like most armies, the Russian spent as much time on fitness training as they did on strength training and I’m equally sure that Hardstyle training had as much carryover to that as it did to hand to hand combat.