We sometimes forget the importance of the gym environment. The community at your box is like water – when the water rises, all of the boats are lifted up. How’s the water in your box?

Ask any ten people who qualified for the CrossFit Games Master’s divisions or Regionals which one thing is the most important aspect of them achieving their goals, and it’s likely you will get one of the following responses:

All true. (Except #3. I think a few competitions during the year are fine, but if you make it a monthly habit, you will grind yourself down).

One thing that gets overlooked in this list, though, is environment. And by environment, I don’t mean the building or the equipment, I mean who are you surrounded by and whether or not they are making you better.

It certainly massages the ego when you are King Badass at your box and no one can ever beat you at anything. The problem is, if you are never pushed, never learning, never absorbing from other much better athletes, how will you achieve your full potential?

Luckily for me, training at Cincinnati Strength and Conditioning easily solves that problem. I am like a sponge in that place, watching everything and everybody and adjusting my game accordingly. This is a box that is overflowing with regional and masters Games-quality athletes, and unbeknownst to them, I have been sponging from them for a year now.

With that I would like to give a shout out to some of the people who helped to make me a better athlete this year and helped me to cross that bridge into the top twenty in the 50-54 category.

Chelsea McCarty: The Motivator. My 22-year-old daughter and I have been CrossFitting together since the very beginning. This girl holds me accountable. She knows what to say and when to say it during those horrible WODs when my wish is to stand there and stare at the bar. There was a point during 13.4 that I really wanted to ease off the gas and she conjured up the motivational phrase that made me jump back into the fire. Moreover, she has the best Olympic lifting technique in the joint. I am constantly watching her out of the corner of my eye on cleans trying to glean that fast-elbow technique.

Kathryn Cyr: The Pusher. Because of an alignment of our goals to make the games, our ability, and our schedules, Kathryn and I trained together most of the year. As the year went on, she got better and faster at just about everything, which forced me to work harder just to keep up. We pushed each other, but similar to Chelsea’s motivational encouragement, I was never able to stand there and rest because Kathryn was always off onto the next round. In addition, she was never content to finish up a WOD and relax. She moved on to skill work, which tacitly demanded that I do the same.

Dave Couch: The Wild Man. Every gym has one. One-time regionals competitor, Dave would do his workouts like a man possessed. Dave is a finisher, which is to say that he barrels through to the end of his WODs harder than when he began, and there were times when I would try to channel that rage as I needed to finish strong. 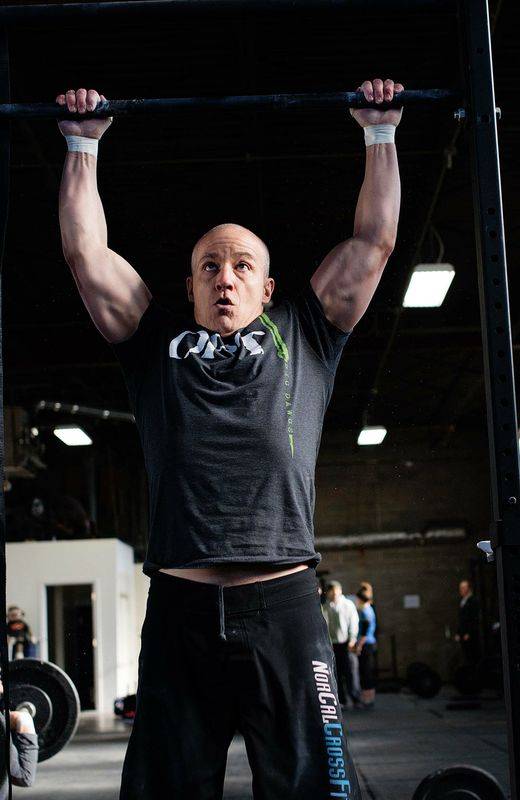 Pete Haggenjos and Glenn Waters: The Freaks. Both of these guys are, for me, uncatchable. Pete is a phenom, and Glenn went to the Games in 2012 in the masters 45-49 division. Both have sub-3-minute Fran times and both tend to inspire phrases like this: “Pete’s time was what??” These guys are jackrabbits who pull you to a better performance just by virtue of your proximity. They raise the game in the box and make the environment one where you simply aspire to be more like them and work harder than you would have otherwise.

There are more, certainly – too many to mention. If you work out regularly at Cincinnati Strength, chances are I have watched you do your muscle ups, your butterfly pull-ups, your snatch, or watched you crush a workout and gleaned from your performance a tidbit of skill, motivation, or style. The environment makes me a better because it’s chock full of truly excellent athletes.

The environment in your box is like water – when the water rises, all of the boats are lifted up. How’s the water in your box? As for me, the water is quite deep.