There are really only two post-competition experiences. You either thrill the crowd with a fantastic showing, or you feel like you just made a total ass of yourself. This is a story about the latter.

There are really only two post-competition workout experiences: the ones where you thrill the crowd with a fantastic showing, and the ones where you walk away trying to avoid eye contact with other people because you feel like you just made a total ass of yourself. This is a story about the latter.

In 2011 when I competed in the Master’s division 45-49, I finished dead last in my heat on the fourth workout. Not just dead last but way, way behind the guy who finished before me.

Wrong. After getting no-repped on all three of the first movements (many on the toes-to-bar and wall ball), I was significantly behind my fellow competitors when it came to the cleans. At that time, power cleaning 135lbs was no easy task for the rookie CrossFitter that I was. So, those took a while, as did the burpees.

By the time I got to the sumo deadlift high pulls, some people were already done. Within twenty reps, everyone was done. I was alone, bringing up the rear.

Naturally, everyone who had finished gathered around in a big circle and started cheering me on. This is one of the great things about CrossFit – this community. There is a saying that floats around the community that says something like “CrossFit is the only sport where the loudest cheers are for the people finishing last.”

Sometimes it lifts you up, and sometimes, quite honestly, it can be a little embarrassing. For me, at that moment, trying to finish sixty sumo deadlift high pulls in front of a crowd being whipped up into pity claps by the announcer was rather humiliating. “Let’s hear it for Pat McCarty, finishing up his fiftieth rep, just ten more to go for Pat McCarty!” Shut up, man. You can literally see the disinterest on the faces of the spectators if you look close enough at the photo above.

My parents, family, and entire box were watching the live feed, and naturally, there was nowhere else for the cameraman to be. He just focused on me, doing four or five reps, then dropping the bar and taking a sip of water. I finished in about 17:45, just barely within the eighteen minute time cap.

Then comes the real humiliation. That agonizing period where you finish up and have to talk to the judge and sign your score sheet and you just feel like saying “I swear, I am not this bad.” Then the long, death row walk past the next heat of athletes lined up ready to go out. This sucked. Everyone gave me the sympathy “Nice job, man. Way to fight through that.” But it was horrible. I felt like a total fraud.

Was I a fraud, though? No. I had finished seventh overall in the previous workout, so I knew I deserved to be there. My prior performances had all borne that out. So what happened?

It’s hard to say. Lack of preparation on this particular workout? The fact that this was not in my wheelhouse, poor sleep, food intake, hydration, time difference, temperature? Who knows. It happened. It happens to many athletes in every sport. 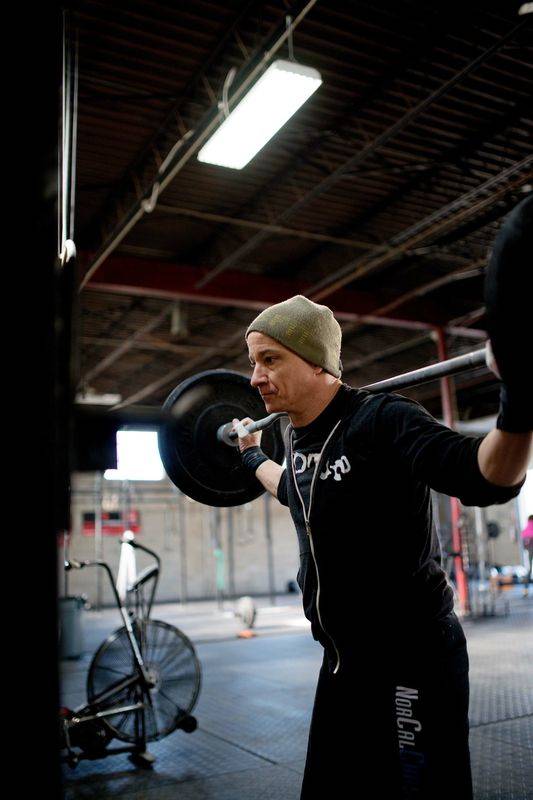 So what if that happens to me in Carson in 2013? What if, for example, I fail to make the third day finals, stranding my coach family and friends in Carson with nothing to see and no one to root for? What if there are cuts at the top twelve and I am number thirteen? What if the last qualifying workout leaves me like the photo above, dead last, surrounded by others, clearly out of contention?

I can choose to see this as a defeat. It could certainly cause a bit of “walk of shame” embarrassment when I go to face my family and friends. I can only imaging the “Sorry you guys flew all the way out here” conversations that I would dread having.

But, if I leave it all out there – every rep, done with every last ounce of strength – then there is no need for me to feel anything less than proud of my accomplishments.

It’s all in how you play the game. If I truly give my all, fight for every last rep, then those aren’t pity claps coming from the crowd. That is the applause of the inspired. If I leave everything on the field and take myself to places of effort and pain that I never imagined possible, then that circle of athletes who gather around are no longer a pity party, they are adrenaline. And if I truly give everything, then there is no walk of shame. It can and should be a walk into the supportive hugs and pats on the backs of a very proud CrossFit family.

This video of sprinter Derek Redmon in the ’92 Olympics shows what I am talking about. Yes, it’s an injury, but pain is pain, and determination is determination. There is no failure in giving your all.