“Community”: the word that binds us all. Ask any CrossFitter from Jane Newbie to Rich Froning why they love CrossFit so much, and they are most likely going to include “the community” in their answer.

It’s four weeks out from the Games, and I am here to tell you that not all communities are created equal. Here’s my bold statement of the week: If you think that joining CrossFit XYZ just bought you a pass to the most wonderful and supportive community ever created, you are wrong.

Cynical? Not really. Read on.

The reality of a CrossFit box is that it is literally no different than any other social congregation of people, whether it’s a book club, a family, a church, a neighborhood, or your local T-ball parents’ league. Some communities are strong and some are not really “communities” at all but rather just gatherings of people who happen to be at the same place at the same time.

Think I’m wrong? I can tell you from experience that for every CrossFit Old Town, raising over $100,000 for one of their ailing coaches, there is another box across town where the founding owners were ousted in what amounted to a coup by other coaches. For every new box that was started with an amicable parting of seasoned coaches there is a box next door with coach defections and a messy divorce at its genesis.

Every gym likes to put “community” in its motto. However, in my five or so years of CrossFitting, I have come to realize that “community” is not even remotely defined by your box’s motto; it’s defined by the actions of the community itself. But those actions, I have learned, must start with you.

I could wax on for a thousand words about how my former box, whose motto includes the phrase “We Train as a Community” failed to live up to that bold statement. But I won’t – because any failure of the community is most likely my fault. For example, I should take some of the responsibility for expecting royal treatment when I qualified for the Games in 2011 that never occurred. After all, if you expect a surprise party for your birthday, imagine how disappointed you are when your family just gets you a cake. Didn’t these people realize that I was kind of a big deal?

It’s very possible the reason the community failed me is because I had failed it. It is possible I was detached, aloof, who knows. It’s possible I failed to nurture beginning athletes in lieu of coddling the star performers. Hell, maybe I was just an ass. I don’t know.

What I do know is that when I was booted out, no one stood up on their desk and proclaimed “O Captain, My Captain.” Imagine my disappointment. Why was no one storming the school board on my behalf or boycotting the gym? I’ll tell you why – because I was expecting a response from a community that I had clearly not invested in, at least not in more than a bricks and mortar way. 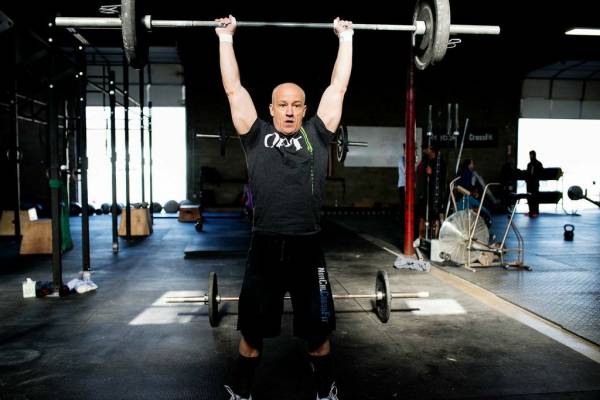 My current box, Cincinnati Strength and Conditioning does not have the word “community” in its fancy website motto. Instead, their motto is “Remake Yourself.” Hmmm, interesting.

This doesn’t prop one up with some fancy illusion of a cardboard-cutout community, an instant group of friends who all share an interest in competitive exercise. This puts the onus squarely on me and me alone to decide how I am going to approach this place called a CrossFit gym.

I started at Cincinnati Strength in early 2012 with that very goal in mind: remaking myself. No expectations, no ego, just a goal to work extremely hard on my fitness and to hopefully make the CrossFit Games.

But what I noticed in the process, and especially now, is that this community is far more cohesive than anything I had ever experienced in my previous gym. And I have a theory on why that is: if you are going to be a part of this community, you have to earn it. It doesn’t come free with your dues or because it’s on the website.

Example: there’s no “50 burpee penalty” for not greeting new visitors – a forced convention that’s as bad as those awful icebreaker games we’ve all done at business meetings. No, this box allows you, requires you, to “remake yourself.” It’s up to you to join the community – sink or swim. But if you swim and really make an effort, you’re part of the family. People who are given the chance to become friends organically and classes that build community naturally rather than some contrived “get to know you” effort may well end up the stronger community in the end.

What I do know is that I am experiencing a support system in advance of the Games unlike anything even imagined in 2011. Every workout I do in preparation for Carson is peppered with shouts of encouragement and support from voices that I sometimes can’t even recognize through the pain, but they are there, and they are loud. There is fundraising happening on my behalf, friends flying to Carson to support me, shirts being made, and hell, maybe even some of those big cardboard heads.

In the process of remaking myself, I am quite convinced that I dropped the ego and the expectations long enough to allow myself to be absorbed into a real community, not one that comes with a monthly dues and a graffiti motto on the wall.

It’s worth thinking about. When someone asks you what you love about CrossFit and you answer “the community,” have you really built one? If not, start now.