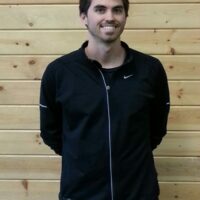 Bret Hamilton is a two-time graduate from George Fox University. After earning his BS in Exercise Science (2010), he returned to school to earn his Master’s in teaching. In addition to his degrees, Bret is a Certified Strength and Conditioning Specialist, Functional Movement Screen instructor, and Primal Move Fundamentals instructor. He is currently studying to achieve a Level 1 Precision Nutrition certification as well as the title of StrongFirst Level 1 Kettlebell Instructor.

Growing up, Bret was very active and athletics were a big passion. He participated in martial arts (Chun Kuk Do style) for nine years, earning his first-degree black belt in 2002. In high school and in college, Bret participated in track and field, winning the conference championship in the 200m dash in 2005.

In the spring of 2007, Bret’s athletic career was derailed for the better part of five years after he completely tore his left hamstring running the 200m dash. Injury compensation eventually caused lumbar, thoracic and cervical spine problems, as well as a shoulder impingement. However, close work with a physical therapist and careful use of the Functional Movement System helped him to restore function and eventually he become stronger than ever before. What once was a personal passion for athletics transformed in to a passion for helping people better their lives through fitness. Bret wants his testimony to inspire others who have dreams of living a healthy, active, pain-free life.