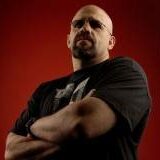 John Hackleman began training in martial arts at the age of 9 and began his fighting career at the age of 14. An accomplished professional boxer and kickboxer, known as "The Train" for his heavy hands and knockout power, John went on to be successful as a nurse and a businessman. In 1985 he founded his own branch of Kajukenbo, which he named Hawaiian Kempo. In the years following he took his backyard gym, The Pit, from the garage to its newest location in Las Vegas, where it measures 12,000 square feet and is filled with state-of-the-art equipment.

Along the way John contributed to the careers of many successful professional fighters including UFC champion Chuck Liddell and Ultimate Fighter winner, Court McGee. John also coaches families and children at his 4,000 square foot gym in Arroyo Grande, and CrossFit competitors out of the backyard facility he calls "The Compound."

In addition to his involvement in martial arts, John was involved in CrossFit nearly from its inception. In a partnership with CrossFit, John founded a system he called "CrossPit" - a blending of CrossFit and John's Hawaiian Kempo. To train like John's fighters and see what they do at The Pit, check out his three weeks of guest programming below.