Homelessness affects 3.5 million people in America alone each year. With such staggering statistics, it seems like a problem too big to face. But Anne Mahlum, CEO of Back On My Feet, is making a difference in a unique way – through running.

Homelessness affects 3.5 million people in America alone each year. With such staggering statistics, it seems like a problem too big to face. But Anne Mahlum, CEO of Back On My Feet, is making a difference in a unique way – through running.

A long-time runner herself, Mahlum started Back On My Feet in 2007. During her own morning runs, she would talk to men outside a Philadelphia mission.

Eventually Anne decided she could try to help them “if she stopped running by them and started running with them.”

Anne started a running club with the mission residents, and from these humble beginnings Back On My Feet was formed. The organization now has ten chapters nationwide, and is launching its eleventh chapter in Los Angeles at the end of this month. On average, 46% of members go on to obtain a job, housing, or both.

In an NBC interview, Anne Mahlum explains how running can combat homelessness: “When I watch somebody finish a run, and a smile just takes over their face, and they sit up a little straighter and give their teammates high fives – when you’re part of witnessing someone discovering their potential, and all they’re capable of, there’s nothing better than that.”

By showing homeless individuals what they’re capable of, Back On My Feet has helped thousands of members get into housing and obtain a steady job.

Last month, I had the opportunity to speak with one such member. You would never guess while talking to Meshach that a year ago he was homeless and struggling with drug addiction. 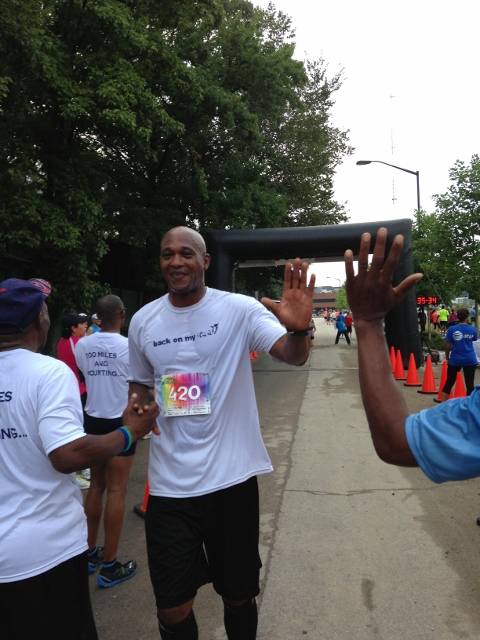 The man I spoke with was radiating with energy and positivity. “For me, this is what happened: I came into a homeless situation and was on drugs and alcohol.

Meshach was first exposed to Back On My Feet while living at a homeless shelter. “These guys were getting up every morning and going out to run. They’d come back and be sweating, and it sounded like such a good thing, and I wanted to be a part of it.”

After applying several times, Meshach was accepted into the program and experienced rapid change. Now he has a steady job (and a recent promotion, in fact), has overcome his drug and alcohol addiction, and is part of an amazing community. “It is a family, and we love each other.

We express our love out there running, and participating in the program and not giving up on each other. It’s awesome.”

Not only is Meshach succeeding in life, but he’s also become quite an accomplished runner in the last year. One of the key components of the organization are the morning runs that are required for members.

On weekdays, members run two to four miles at 5:30am, with a long run on Saturdays in preparation for a half or full marathon. “I’ve done several races – wonderful. I ran a half marathon a few months ago, and that was one of the biggest challenges for me. The race was actually easier than the training! It is so, so positive. Anyone who wants to receive it can go as far as they want to.” 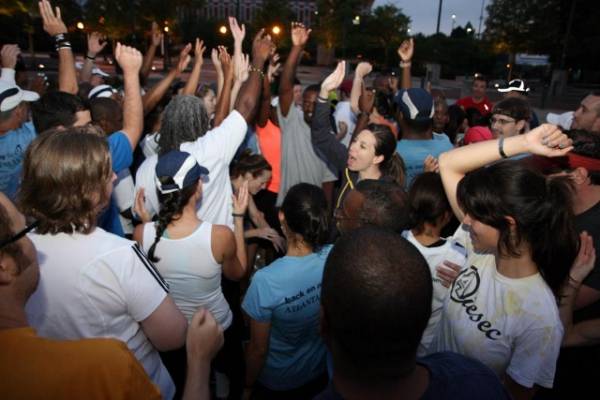 For Meshach, the running component has also helped in his struggle with drug and alcohol addiction. “It helps a lot with it, because you don’t think about it.

You’re just out there and you’re free, running with everybody else. You don’t want to be the one who drops the ball. I want to make sure I keep the ball rolling, because it’s a good, positive thing we’ve got going here… I’m around positive people. I’ve never heard one of them say a bad word. To be in that positive environment is so important to me.”

So in just one short year, Meshach went from homeless to employed and thriving – not to mention all the races and training he’s done this year. I asked him what was the most important thing he wanted readers to hear, and he answered, “I want to tell everybody don’t give up on yourself.

None of us are perfect. If you’re doing negative things, stop doing it. Grab onto something positive, whatever it may be, and don’t ever give up on yourself.

I’m 55 years old, and I feel so good about myself and the direction my life is going in now. If you want to feel good about yourself, do the right thing as best as you can.”