Book Review: “Beyond Bacon” by Stacy Toth and Matthew McCarry

If you love pork, Stacy Toth and Matthew McCarry have written a book for you. “Beyond Bacon” is a unique resource full of information and recipes featuring the pig.

I predict Beyond Bacon, by Stacy Toth and Matthew McCarry of Paleo Parents, will be my favorite cookbook of 2013. Not only is it informative and full of delicious recipes, but it also features one of my favorite animals: the pig. As the name suggests, this book is completely devoted to the many culinary delights you can create with our foraging friends – from carnitas, to lard, to head cheese.

I haven’t always been a fan of pork. As a kid, I remember dreading pork chop night. No offense, Dad, but it always tasted dry and bland and I found myself wishing we could be eating a juicy steak. When I got married six years ago and decided maybe I should learn to cook, I gave pork chops a try and failed terribly. And so until last year, we didn’t eat very much pork.

Then we discovered pastured pork. In an effort to start consuming locally and humanely raised meat and produce, we started buying our meat at a local butcher shop, which was quite a bit more pricey than Tyson. Some of the most affordable cuts of meat happened to be pork, so we hesitantly decided we could give my source of childhood dread a second shot. 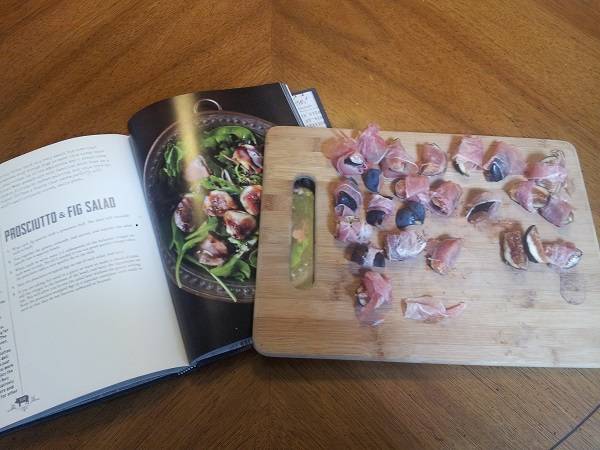 I’m glad we did, because it’s become one of our favorite meats now. If you have bad associations with pork, I have two suggestions. First, try real pork. As Stacy and Matthew note in their book, the flavor of pastured pork “is enhanced, not changed, when they are fed the foods they would normally eat.” That means, unlike venison or pastured beef, pastured pork won’t have a gamey taste. Second, since you’ll be addicted at that point, buy the book Beyond Bacon.

This book will teach you everything you want to know about pork. A word of warning: if you just want a cookbook with recipes for basic pork recipes, this is not the book for you. Beyond Bacon is a comprehensive resource that will teach you how to use the whole pig, from the tongue to the trotters. Really, the book is ideal for people who are interested in purchasing a whole pig. You will learn how to make homemade lard, sausage, broth, and more traditional recipes.

The format of the book reflects this priority on the whole pig. The book begins with an introduction to pork and addresses a number of questions I had myself before received it. For example, Stacy and Matthew discuss the concern that pork is somehow unhealthy or bad for your blood, which is an impression I had received from various other resources. They also discuss the ideal temperature for cooking pork, the mischaracterization of pigs as dirty animals, the various cuts of pork, and how to get started purchasing a whole pig. As someone who is a new convert to pork and also interested in purchasing a whole pig someday soon, this section was extremely helpful.

From here, Stacy and Matthew move into various basic pork preparation methods: smoking, deep frying, and stuffing sausage. Although this might sound intimidating, the tutorials are straightforward and made me excited to give them a try – especially sausage stuffing, which I always thought was a complicated and difficult process.

The rest of the book is devoted to recipes, and the ones we’ve tried have been absolutely mouth-watering. I love the variety of recipes in this section – you’ll find exotic dishes like Cuban spiced plantains, pho with chitterling noodles, and sweetbreads alongside basic recipes for pork chops and barbecue. The section I was most excited about was the chapter entitled “The Basics: Lard, Stock, Sausages, and Cured Meats,” which teaches you how to make your own bacon and pancetta.

Overall, Beyond Bacon is a one-of-a-kind resource for anyone interested in preparing pork the traditional way. The recipes are also all paleo-friendly. But be warned: if you have any reservations about lard, you’ll have to be a bit open-minded with this one.