For almost twenty years, I was a trampolinist. And the typical response I got when telling people that was, “Is that even a real sport?”

With all the dignity a teenager can muster, I would inform them it was actually an Olympic sport, and that I’d like to see them try a double-twisting, double-somersault while nine meters in the air.

For a long time trampolining was the purview of a select group of elite athletes, as well as a few kids whose parents didn’t mind the risk of broken bones from a backyard trampoline. But there has been a resurgence of trampolining -sometimes called rebounding – across my country of Australia, and elsewhere around the globe. Here, we have numerous centers like Bounce and Flip Out, rebounding exercise programs, bungee trampolines as rides at festivals, and many safety innovations in the humble backyard trampoline. Trampolining is now accessible to everyone.

“NASA’s research found that ten minutes on a trampoline was a better workout than thirty minutes of running.”

With that accessability has gradually come a change in the way we view the activity. It is no longer the domain of only children or elite athletes. It is now a legitimate form of exercise in its own right. Below are some of the reasons you should add a little bit of bouncing to your exercise routine.

Trampolining is both an effective and efficient way to work out. In fact, NASA recommends rebounding for all its astronauts. Their research found that ten minutes on a trampoline was a better workout than thirty minutes of running.

A commonly held misconception about the trampoline is that because you are jumping high there is a lot of impact on the body. But in actuality, the bed of the trampoline absorbs approximately 80% of the rebound shock – sparing your joints from the impact. This makes rebounding the perfect form of exercise for growing kids, rehabbing athletes, your grandmother, and those of us with joints that complain from time to time.

It Makes You Strong and Stable

Not only will you build incredible jumping muscles (think quads, calves, and glutes), but you also have to engage your core constantly to stay balanced. Forget those plank exercises, trampolining will give you great stabilizing muscles throughout your core.

It Works Your Pelvic Floor Muscles

I know many women who say they will never get on a trampoline after having kids because they experience issues with leaking. But the trampoline is actually an excellent tool for fixing this problem. Every time you land on the trampoline, your pelvic floor has to contract to keep everything in place. While it could be embarrassing to jump straight back onto the trampoline with your kids, starting with some gentle rebounding (your feet don’t even have to leave the surface at first) can be a great way for moms to build those muscles back up.

Increasing bone density works the same way as building muscles – you stress the bone, which then encourages your body to reinforce and strengthen your bones so they can deal with greater stress the next time. There are two ways to positively stress your bones in order to increase bone density: resistance training or impact training. Trampolining falls into the impact category. But unlike other impact activities like running or skipping, it doesn’t stress your joints. Add trampolining to your resistance program to build strong bones, protect against osteoporosis, and reduce the risk of fractures.

“Admit it – your inner child secretly wants to get in that jumping castle at the party, launch into the foam pit at the gymastics center, or try out a flip on your neighbor’s backyard trampoline.“

It Builds Coordination and Spatial Awareness

Jumping requires your whole body to move together in a coordinated way. We’ve probably all had a little laugh at kids who don’t understand how to coordinate their body properly – they lift their knees really high, pump their arms up and down, and move about two centimenters off the trampoline. Conversely, you’ll notice that kids with a background in gymnastics, diving, dance, or trampolining typically pick up new sports quicker than other children. This is because trampolining, especially when you add some tricks and somersaults, forces your brian to develop a new understanding of your body – an understanding of where each of your body parts is in space and of how to move each of those parts in a coherent, linked way. Qualities we commonly refer to as spatial awareness and coordination. 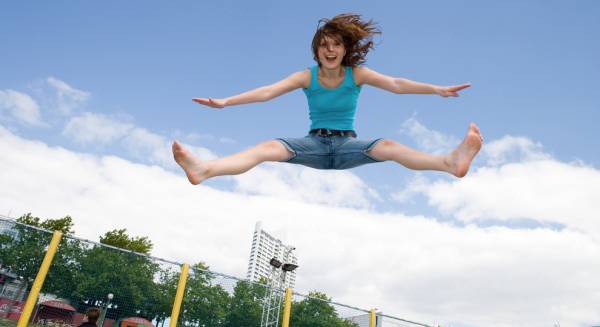 It Improves Your Immune System

Your lymphatic system is responsible for clearing toxins out of your body, producing white blood cells, and protecting your body from disease. Unlike the cardiovascular system, which has the heart to pump blood around the body, your lymphatic system requires movement and gravity in order to stimulate the flow of lymph fluid through numerous one-way valves. Rebounding is one of the most efficient ways to do this. Bouncing causes all those one-way valves to open and close increasing the flow of this system by as much as fifteen times.

It Makes You Smarter

A chiropractor first told me this and I have to admit to disbelief until I went and researched it. There are numerous studies that demonstrate exercise in general improves mental performance in areas such as focus, memory, and mood. Trampolining adds to this in several ways:

“Forget those plank exercises, trampolining will give you great stabilizing muscles throughout your core.”

Admit it – your inner child secretly wants to get in that jumping castle at the party, launch into the foam pit at the gymastics center, or try out a flip on your neighbor’s backyard trampoline. Having fun and laughing are even good for you – reducing stress, improving blood pressure, and releasing endorphins. 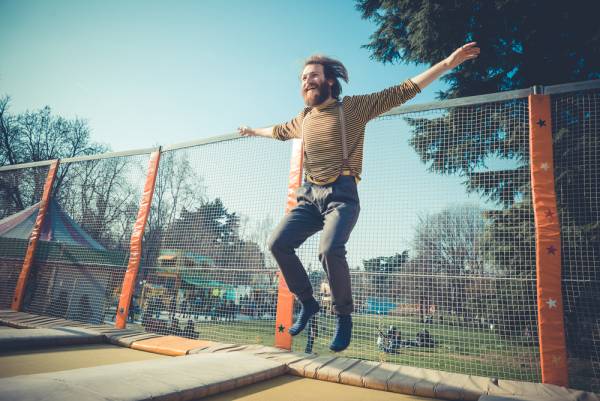 Why Not Give It a Try?

So change up your exercise program with some trampolining. You can easily buy a rebounder trampoline, head to your nearest trampoline center (they’re popping up all over the world), buy a trampoline for your backyard, or even enroll in some lessons at a trampoline or gymnastics club.

But it’s time to get jumping – it’s not just for kids!

Read more on jumping for fun:

Christie Jenkins is a world-class athlete in three different sports, has spoken to groups of over 500 people, has written articles for a number of magazines, has appeared on TV, is a certified life coach, and has worked in strategy consulting since 2011.

In her spare time, she has run away and joined the circus for a year; hiked Mt. Fuji, Mt. Kilimanjaro, the Annapurna circuit, and the Grand Canyon; skydived and bungee jumped; volunteered in Africa; sponsored a child in Nepal; studied abroad in China; and performed in the closing ceremony of the Commonwealth Games.

National Trampoline Champion for twelve years (1998-2010)
Ranked in the top ten in the world (2009-2011)
Pan Pacific dual gold medalist
Bronze at the Youth Olympics
One of just five athletes part of the AIS program, and the only female (2006-2007)

Gold in the $50,000 Hermosa Open in 2013, the most prestigious event of the USA National Volleyball League calendar
Fifth place, 2014 Australian Beach Volleyball Championships