We preach about focus and determination during training, but sometimes letting your mind wander can bring the best results.

You must love the first category. They are a coach’s or trainer’s dream. The second category is admirable but keeps the coach or trainer busy. The third category is frustrating and head-scratching. What the heck are they even doing here?

We are all seeking ways to increase training intensity for our athletes, our clients, and ourselves regardless of what category they, or we, fall within. Any little bit of help is appreciated.

Effort – It’s All In Your Head

Bradley Stulberg, in a blog entitled The Stranger-Than-Fiction Way to Cheat Fatigue, wrote on how stressing the mind is the secret to training your body. In essence, you can gain huge performance benefits by changing your perception of effort.

Stulberg’s writing focused around a study conducted by the UK’s Ministry of Defense. In the study, 35 soldiers were divided into two groups. Both groups trained on a three-day-per-week format. They stationary cycled each session for the same duration and intensity relative to their own baseline fitness.

“Knowing a rep limit based on past performance can keep you from truly going all-out.”

Additionally, one half of the soldiers were given a mentally demanding task, such as looking at different combinations of letters as they appeared on a computer monitor. They were instructed to click a button when a certain combination of letters appeared. This all occurred while they pedaled during the workout. Hence, they had a distraction during their exercise. The other half of the soldiers simply peddled away with no distractions or ancillary focus.

After twelve-weeks, both groups showed similar increases in V02 max (a common marker of physical fitness). The training routines were similar, so this would make sense. But there was one huge differential: the time to exhaustion test.

Those who trained without a mentally challenging task improved their ability to combat fatigue on the average of 42%. Those challenged by the mental task of clicking letter combinations on the computer during their workouts improved by a substantial 126%. That is three times greater than the control group. 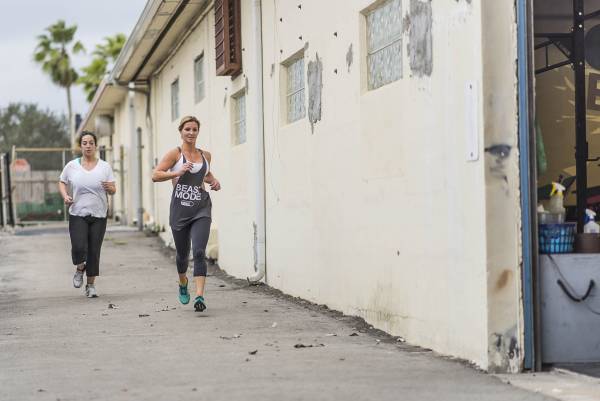 The underpinning of this result is the strengthening of the anterior cingulate cortex – the part of the brain associated with perception of effort. In essence, if your brain and body are stressed at the same time, the mental strain can ease your physical strain, making it seem easier. Then, when the cognitive task is removed, your new-found mental allows you to tolerate greater physical stress. Your brain becomes stronger and better able to endure pain and discomfort.

Complicated or highly technical exercises probably would not benefit from this approach. Anything of that nature requires total concentration. Adding a mental activity would be more appropriate and safer with simpler exercises. It is also suggested that mental distractions be used for activities performed at no more than 85% of maximum effort.

So, here are some questions:

Lifting a heavy set of barbell bench presses requires total concentration due to the nature of the event and for safety reasons. Comparably, sitting on chest press machine with a guided movement and cranking out maximum reps while your mind can be elsewhere seems more relevant.

“If your brain and body are stressed at the same time, the mental strain can ease your physical strain, making it seem easier.”

I am not a music, book, or television fan when it comes my training. I don’t get it. I love being well aware of the in-the-moment heavy breathing and fatigue. Background music via wall-mounted speakers is great, but that is it. That said, I recently attempted two modes of mental distraction training and experienced some interesting results.

I have a love-hate relationship with the VersaClimber and barbell squat. They are both great tools, but they both suck when done properly.

On the VersaClimber, I’ll climb like a maniac for a certain amount of time before I look to see how many feet I have accumulated. One day, I decided to climb while mentally and verbally naming all fifty states in the U.S in alphabetical order. My goal was to get from Alabama to Wyoming before I checked my climbing time and feet logged. Thus, a mental distraction was added to the task while maintaining a high level of climbing effort.

The result: By the time I got to Wyoming I had doubled my normal time and feet. In that moment, the state-naming distraction worked.

Occasionally I’ll do a barbell squat workout where I simply crank out as many reps possible with 135 pounds in a single set without racking the bar. I am an older dude, so I don’t do many ultra-heavy squat workouts anymore. The 135-pound squat session -because it is relatively lengthy – becomes a counting thing. That is, I first focus on getting to twenty reps, then forty, then I eventually do mini sets of tens and fives as fatigue takes its toll. Before this test, my best effort was 85 reps. 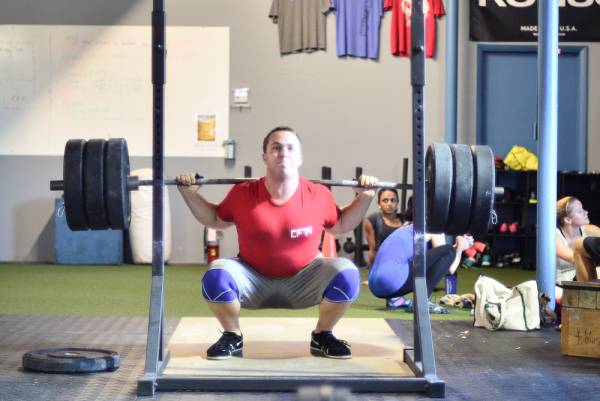 Then one day, I had another person count my reps with a clicker while I zoned out of counting (which is hard to do) by occasionally conversing with him about random things. I just squatted and focused on proper technique rep after rep, ignoring any rep count of my own.

Eventually, the high-rep squatting endeavor became very uncomfortable and I felt I needed a ballpark number of where I was. I asked my counter, “Am I past seventy?” He replied, “No,” so I kept going.

He lied to me. When I had enough of that uncomfortable event, I racked the bar and learned I had totaled 93 reps. Without me being aware of my rep count and just focusing on grinding out good reps, I surpassed my best previous effort. Again, distraction worked for me under the circumstances.

Knowing a rep limit based on past performance can keep you from truly going all-out. Many trainees want to know, “How many should I get?” Then they limit themselves to that number. They are satisfied even though that number may be suboptimal and they could do more. Intentionally incorporating distractions could prove to be a useful tool in pushing you (or your clients) beyond these presupposed “limitations.”

“We are all seeking ways to increase training intensity for our athletes, our clients, and ourselves regardless of what category they, or we, fall within.”

This creates an interesting discussion when it comes to hard training and your level of tolerable discomfort. As a trainer or trainee, what mental techniques can you use to elevate your training intensity to make further gains? I’d like your feedback, so feel free to respond to this post in the comments below.