CrossFit and the Real Meaning of “No Excuses”

When my 4:45 alarm goes off and I want to throw it at the wall, I think of Joe Fonseca.

Sometimes it’s hard to go to the gym. Work stress creeps in. Obligations begin to take over. Maybe a nagging injury flares. I know I have my excuses.

After I met Joe Fonseca I started to suck it up a bit more. Joe is a father, coach, adaptive athlete, and gym owner. Arguably, he faces more challenges on a daily basis than many of us can fathom. That is why, when my 4:45am alarm goes off and I want to turn it off (or throw it, take your pick), I have begun to think, “Nope. Joe is up. I’d better be up, too.”

An Outlet for Competition

Joe loves physical competition and says there is something unique and special about pushing yourself to that degree. CrossFit has given him an outlet for the competitive nature he says he has.

“There are definitely no excuses allowed at his gym and he says one of the most valuable things is the family-style dynamic that he and his members have come to enjoy and depend on.”

Sometimes the competitions don’t always go as Joe plans, but the crowds watching and the cheering when he is doing his lifts gives him his drive and focus. Joe explained that as with any competition he enters, “Regardless of how I physically did, I just love it.” It’s his hope that people watching him compete will be inspired to get off the couch and get active – maybe try exercise themselves, instead of “offering up justifications on why they don’t do things.”

How Does He Do It?

Joe has to do his lifts with straps and other materials he employs to help him lift and have a “grip,” so to speak. Due to his ingenuity, he has been able to participate in many of the athletic activities that he hadn’t been able to in the past. But even though the straps help him, they are still limiting because of the shoulder engagement that occurs when he lifts with them.

Joe believes his anatomy doesn’t always allow for the best show of efficiency and strength that he possesses, but that doesn’t mean he stops cultivating ways he can make his gains. Any workout that challenges him and makes him strive to figure out best way to complete the tasks is his favorite workout. “That’s the thing I love about CrossFit,” Joe emphasized, “I can never get comfortable.” 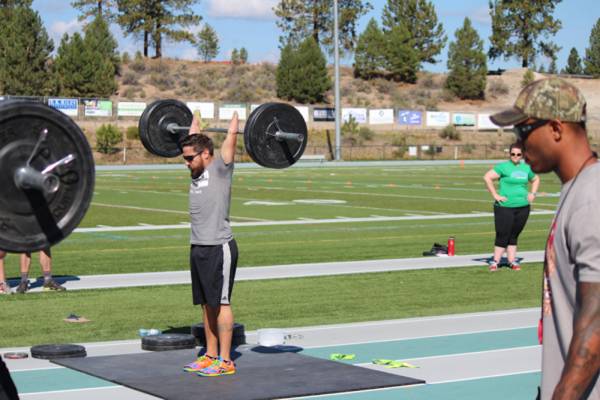 Joe at a local competition. CrossFit has given him an outlet for his competitive nature.

Joe owns and operates Triumph Fitness/CrossFit Redmond in Redmond, Oregon. While he had previously worked a variety of assorted jobs, none of them allowed him to focus on one of the most important things in life: being healthy. Then, he noticed CrossFit gyms popping up, took interest in the challenge presented, and the rest is history.

“It’s his hope that people watching him compete will be inspired to get off the couch and get active – maybe try exercise themselves, instead of ‘offering up justifications on why they don’t do things.'”

Joe began by doing all his own coaching but now has a staff of coaches at his side. His membership continues to increase and many of the members have become like a family to each other and to him. A lot of his business success is attributed to Joe’s overall attitude with his members and the encouragement he provides as he coaches and demonstrates the workouts. There are definitely no excuses allowed at his gym and he says one of the most valuable things is the family-style dynamic that he and his members have come to enjoy and depend on. For Joe, the family element is a powerful component and most days his three-year-old daughter, Claire – aka “Happy,” is hanging out down at the gym with him.

Just as much as Joe inspires his members, his members inspire him when they get past their hang-ups or injuries, safely make their gains, and get moving however they can. The improvement in quality of life that comes with being a bit physical, whether it is through CrossFit or some other physical endeavor cannot be measured.

I asked Joe about what he does to motivate potential new members who inquire about his gym. His response will resonate with me forever and I hope it will with you, too.

I normally don’t tell anybody that I don’t have hands when they call to inquire about my gym. I don’t pre-warn them because I’ve discovered over time that’s the selling point, honestly. I like to have them participate and I generally work out with some of my classes to some degree and the moment the person comes in the door and they see me do that, they really realize that they can’t have an excuse.

Joe continues his mission to inspire through other endeavors and is a sponsored coach and athlete for Team Some Assembly Required. It is a newer company that is just getting started but its mission is to support adaptive athletes and get them going with competitions through sponsorship. Check out their website to learn more.

Photo 1 courtesy of I Am Adaptive and Marilyn & Ellyse Zosia.