Everyone knows fermented foods are good for you, but a lot of people don’t realize how easy they are to prepare yourself. Today we learn how to make easy homemade yogurt.

The first time I had real yogurt was at a friend’s home when I was living in Europe. She pulled a giant glass jar out of her fridge, scooped out what looked like sour cream, poured a little bit of raw honey on top, and handed it to me while explaining that her Bulgarian grandmother had just made it yesterday from the sheep in their backyard. I was suspicious. This was not the runny pink yogurt with strawberry chunks that I was used to, but it was delicious. I’ve never been able to go back to my cups of pink imposter yogurt, and perhaps it’s just nostalgia, but yogurt is one food that I can’t give up, even after switching to a paleo diet.

Since that fateful day, yogurt, and Greek yogurt in particular, has come to the forefront as an indisputable health food, largely due to the yogurt company Chobani’s sponsorship of the Olympics in 2012. With that move, Chobani surpassed Yoplait as the leading yogurt company in America and also opened up a new target audience for the yogurt industry: athletes. So is yogurt all it’s cracked up to be for athletes, or is it just a craze fueled by Chobani’s success at the Olympics? Studies seem to suggest there’s more going on than lots of money and advertising. Yogurt – Greek yogurt in particular – is an excellent source of protein and calcium, and also has a lower lactose content, which makes it a tolerable dairy source for many people who can’t drink milk. Perhaps even more importantly, it’s a great source of probiotics, which are commonly lacking in the modern diet. Probiotics have benefits for everyone, including a few that are especially important for athletes:

1. Immunity: Probiotic yogurt has been shown to boost immunity and decrease incidence of allergies and colds. A 1999 study compared non-yogurt eaters, conventional (i.e. heat-treated) yogurt eaters, and probiotic yogurt eaters with astonishing results. “What was most striking was the decreased incidence of allergies in the live-active yogurt group compared with the other two diet groups in both the young and senior adults.” If you train hard on a regular basis, a little immunity boost certainly can’t hurt.

2. Calcium Bioavailability: Milk is often touted for its high calcium content, but some studies suggest the calcium in yogurt may have a greater effect on bone mineralization than that found in milk or in heat-processed yogurt due to the acidic pH, which allows for calcium uptake in the intestines while also canceling out the effects of phytic acid. Of course, optimal bone mineralization is a plus when it comes to performance, particularly later in life.

3. Effects on Recovery: Yogurt’s high protein content makes it a great option for fueling your workout. Beyond the gym, yogurt is an excellent food to eat if you want to accelerate recovery from illness. In our family, yogurt is one of the first foods we eat after a bout of stomach flu or other digestive issues. If you have to take antibiotics, supplement with a good probiotic yogurt to keep your gut flora healthy.

That being said, not all yogurt is created equal. Yogurt is already high in sugar, so we steer clear of any products with added sweeteners or flavorings. Although labels will tell you whether a yogurt contains alive and active cultures, I’ve found the best way to find a good yogurt is to judge based on taste. A yogurt with lots of live, active cultures will have a tangy, almost sour taste, which stems from the presence of lactic acid producing bacteria.

My biggest gripe with the yogurt craze is that the Greek yogurt out there on shelves is ridiculously expensive. I didn’t realize this until I started making yogurt myself. For the price of just one gallon of high-quality milk, I can make enough yogurt to feed our family for about a week. If you were to buy the individual packages of Greek yogurt it would cost about $12 per day for us to have the same amount daily. That’s the real secret of fermented foods: they are some of the easiest and cheapest foods to prepare – after all, people have been doing it for centuries.

How easy is yogurt to make? It’s almost embarrassing how simple the process is. I’ve made it several ways, but here is the simplest and most foolproof method I’ve found for making delicious and healthy yogurt:

1. Clean the crock pot well and make sure there aren’t any odors clinging to the inside. Nobody likes curry-flavored yogurt – or at least I don’t.

2. Put 8 cups of milk in the crock pot. Use high quality, organic and grass-fed milk if possible. We actually use local grass-fed raw milk in our family as it sours naturally and has an unbeatable creamy texture. I like mine full-fat. I’ve noticed that some recipes also add dry milk at this point, but I’ve never tried it.

3. Turn the crock pot on low and let it sit for about 2 ½ to 3 hours. Check it every so often to see if it’s sticking to the sides or if a crust is forming on top, and give it a stir if it is. You want it to be hot and steamy but not boiling – between 180 and 185 degrees if you use a thermometer. 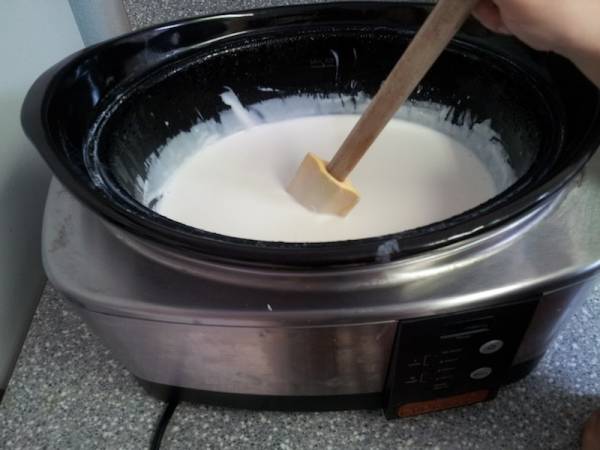 5. Stir in ½ cup of cultured yogurt. I use organic full fat Greek or Bulgarian yogurt if I don’t have a starter already prepared. You can also use a powdered yogurt starter, but I’ve always had great luck with yogurt. Cover the crockpot and wrap it up in a warm blanket or a few towels to keep it warm and cozy for the next 8 to 12 hours.

6. Once the yogurt has reached the consistency you want, pour it into a container (I use mason jars) and let it cool for a few hours.

7. At this point, you can either eat it or strain the yogurt to make Greek yogurt. This batch came out a bit runnier than usual. I usually prefer not to drain all of the whey because it goes a bit further, but I did strain this batch. Straining the yogurt will also remove most of the lactose, so if you’re sensitive to lactose it’s probably best to strain it.

To strain the yogurt, line a strainer with cheesecloth or coffee filters and gently pour the yogurt into the strainer. Allow it to sit for about 30 minutes to an hour until it reaches the desired consistency. This is also great entertainment for young children. 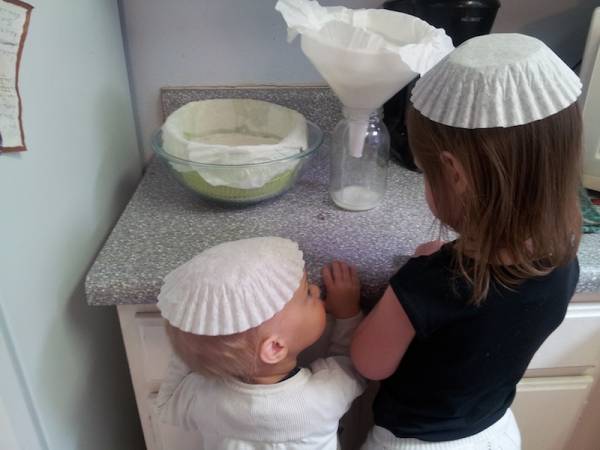 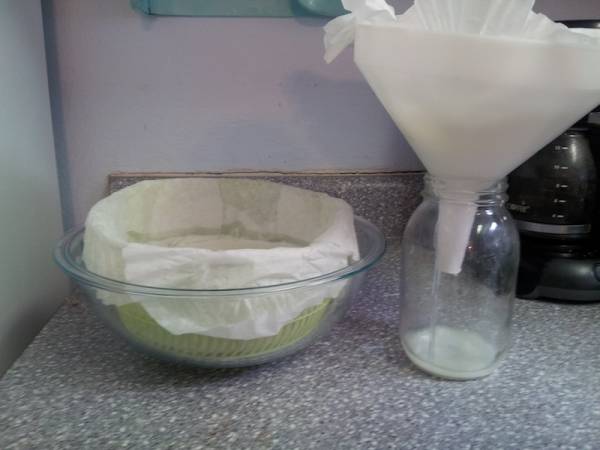 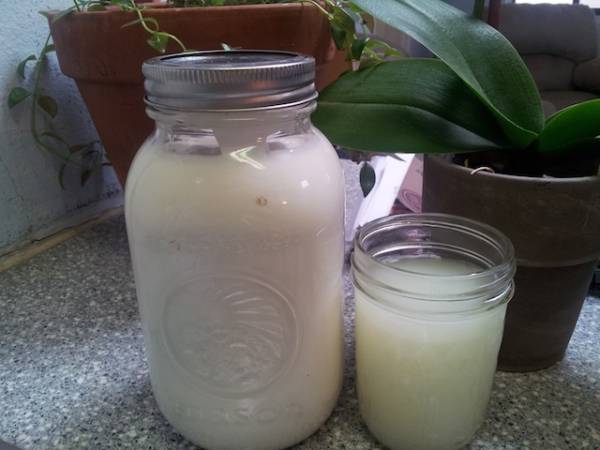 Don’t throw out that whey – we’ll use it next week for our next fermentation project. And there you have it! You can also add fruit or other flavoring to the yogurt, but I never have.

A final word for readers who follow the paleo diet. Despite the fact that it is technically a dairy product, there seems to be some controversy as to whether yogurt should be ‘allowed’ in a paleo diet. For example, here’s some advice from Mark’s Daily Apple: “If you want the real benefits of probiotics, make fermented foods a regular part of your daily diet. Eat sauerkraut, kimchee, full fat Greek yogurt (Fage is a good one, or look for a local Greek market), or kefir (if you tolerate dairy).” Many people with conditions like inflammatory bowel syndrome report dramatic improvements in their symptoms after eating yogurt. If you follow a paleo diet, tolerate dairy, and feel that you could use a probiotic boost, it’s certainly worth a shot.