The novelist Virginia Woolf once said, “One cannot think well, love well, sleep well, if one has not dined well.” While this is certainly true for adults, it is perhaps even more so for children. I’ve noticed with my own two young children, ages three years and sixteen months, that the food they eat has a dramatic impact on their mood, ability to focus, and sleeping habits.

That’s why, a few months ago, we decided to do our own version of the paleo challenge. I realized a lot of the food my children were eating was processed or nutrient-poor food. Our eating habits weren’t horrible, but in the midst of our busy daily life, they had definitely started to slip. Whereas my first daughter’s favorite food at the age of one was avocado, my second was beginning to prefer Cheerios. Something had to change. The paleo diet seemed like the perfect way to eliminate the foods we didn’t want and readjust our eating habits.

So, with the help of a few wonderful books (Melissa Joulwan’s Well Fed comes to mind), we have transitioned to a diet that is about eighty percent paleo. For those of you who have also felt the urge to make similar changes, but don’t know where to start, here’s what we did. It was actually very simple.

First we cleaned out the pantry. All of this had to go:

I would advise you do this when your pantry is already running low to minimize waste (and guilt). I put all the non-perishable stuff in a box and took it to a local food pantry. Then I realized there was nothing to eat, so we went on our first paleo shopping trip. At this point, I had two concerns. The first concern was money. How were we going to eat all these paleo foods and still stay within our budgeting goals? This leads into step two:

The next step was to determine how much we could spend on our first paleo shopping trip and find the best deals on meat and produce. There is a store called Sprouts in our area that has really good prices on high-quality meat, seafood, and produce, and that’s where I headed. To stock the pantry I bought:

If I had read this list before our transition, I would have gasped in horror and said “That’s way too expensive for us!” After all, my husband is a high school teacher and I am a freelance writer. We live comfortably, but we’re not rolling in money, so we also live simply and on a budget. Now that I’ve made the transition, however, I can say that in reality, our spending is just as much if not less than before. Why? Because of all the things we’re not buying:

…and the list goes on. When it was all said and done, the tab on my first paleo grocery store visit was higher than usual, but after that the costs were just as much, if not less, than what I was spending before.

Step 3. Make a Menu and Prepare Food for the Week

Once the money question was answered, my next area of skepticism was convenience. What would I feed my two young children during those desperate moments of hunger if I didn’t have Cheerios and granola bars? Non-paleo foods like granola bars, crackers, and the ever-popular Cheerios are such easy, quick solutions when you don’t feel like cooking or getting out the vegetable peeler. However, with a little bit of advance preparation, we’ve managed to make it work. Once a week, I prepare a designated shelf in our fridge with the following foods:

It takes less than an hour to put it all together, and that provides most of the snack foods for my girls throughout the week. My older daughter also has nuts, as well as homemade jerky and dried fruit. To give you an idea of what the rest of our day looks like, here is a typical menu for one day in the Crawford family: 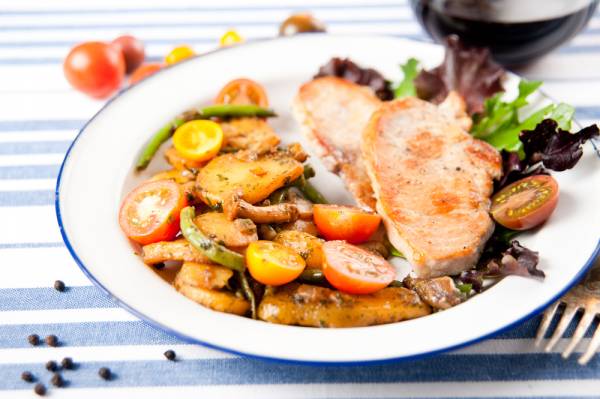 As you can see, we’re not paleo purists, and there are some foods we just haven’t been able to part with even after our paleo challenge. My husband and I love raw milk, which we also use to make homemade yogurt. We also brew our own beer and enjoy making (and drinking) it. And I still make homemade bread to go with dinner every once in a while. Not only is the smell of fresh-baked bread one of the things we savor most in life, but I also really enjoy making it. That being said, we also enjoy these foods a lot more now that we’ve improved our overall diet.

Although we didn’t end up following a strict paleo diet, I found that integrating paleo recipes and ideas has helped us reconnect with our food. We’ve found paleo eating to be not only delicious and satisfying, but also affordable and convenient. Those last two qualities were totally unexpected bonuses. The best part of all is watching my children enjoy eating nutritious, whole food, and knowing that we’re doing our best to establish healthy eating habits from youth.