It’s true. World-class rowers, CrossFitters, and everyday gym-goers. Everybody hates the ergometer. But, in actuality, rowing has amazing benefits for athletes and fitness enthusiasts of all levels.

Josh Crosby is a third-generation rower and former world champion, he is also the founder of Indo-Row. Inspired by indoor cycling, indoor rowing involves groups of people working on rowers, typically rowing in sync, and with a coach to guide them through intervals.

Said Crosby, “The biggest myth about rowing is that it is an upper body workout. Rowing works nine major muscle groups: quads, hamstrings, glutes, lats, core, shoulders, triceps, back and biceps. In addition rowing is an amazing cardio workout.” On top of that, the basics of rowing can be learned in one short session.

One of the additional benefits I personally got from indoor rowing was a major boost in mental toughness. When I interviewed Josh Crosby, he agreed:

“Mentally rowing makes some very tough men and women. Those monitors don’t lie and hold you accountable for every stroke. For your other workouts or competition, rowing teaches you not only how to pace yourself, but how to ‘empty the tank’ when you need to.”

MMA fighters are some mentally tough people, and according to a 2011 study published in The Strength and Conditioning Journal the metabolic demands of a high intensity rowing workout are similar to that of combat sports. The researchers wrote, “They share a common goal, to increase muscle buffering capacity and delay fatigue while improving power and explosiveness to maintain peak performance during competition.”

In addition, the researchers favored rowing for MMA and other fighters because of is low level of impact and stress on the body. For more on the benefits of rowing for those in the fighting sports, read Supplemental High Intensity Rowing and Combat Sports.

The Frustration That Is Rowing

I mean, you’re not going anywhere – really. But it does not have to actually feel like that. There are some basics of biomechanics and technique that you need to understand in order to be efficient and effective on an ergometer. 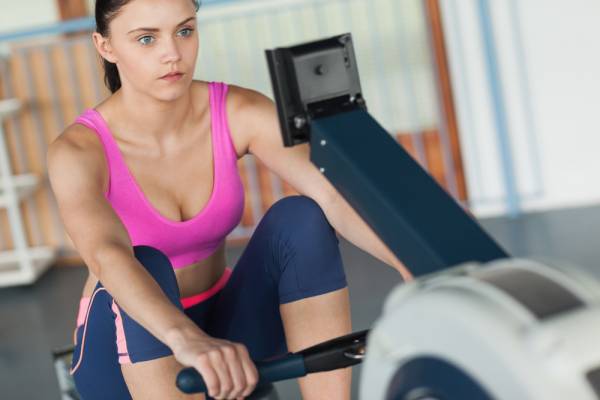 This is where my journey with the ergometer finally turned from hate to love. Once I got the technique down, then I really began to appreciate rowing. In order to share what I learned with others still grappling with their feelings, I created The 17 Commandments of Rowing. I guarantee if you read through those – and then actually do them – your rowing world will change completely.

Here’s a sample of the first five commandments:

1. Don’t grip too hard – Don’t hold on so hard to the handle. Keep enough grip to not lose the handle, but also not so much that you wear out your hands, have achy forearms, and tear up your palms.

2. Drive with your legs – Rowing is mostly about your legs. Despite your natural instincts, your legs are far stronger than your arms and should be doing the vast majority of the work. Your quads and booty should be toasted after a hard rowing workout.

3. Imagine you’re doing a clean – If you don’t know how to perform this lift properly, don’t imagine this. Imagining doing a clean won’t help in that case.

4. Legs, hips, arms, arms, hips, legs – This is the sequence of rowing. If you reorganize this list, it doesn’t work.

5. Drive straight back – If you feel yourself lift off the seat, or tragically, you pop off the seat and land on the rail, it is because you are pushing UP instead of back. Push straight back.

Once you got the basic rowing stroke down and you want to refine your workouts, then there are two numbers you need to focus on. You need to be in control of your stroke rate and your split times.

Think about it: Would you ever just walk up to a barbell and attempt to lift it without knowing how much weight was on it? Would you just start swinging a kettlebell without counting your reps? So, why would you get on a rowing machine, or ergometer, and refuse to look at the monitor while you row?

Stroke rate and split time are the real keys to being the commander of the rowing machine, versus a victim to the rowing machine. And, they’re also the key to even more personal records. For more info on how to gain control of these two facets of rowing, read 2 Numbers That Will Make You a Better Rower.

Here’s a video from Olympic bronze medal rower Magda Fularczyk. In it she rows slowly so we can see the elements of her technique. Try watching the video and seeing if you can emulate her sequence of body movement when you get on the rower.

The Damper Is Not Resistance

And before you go, one last thing. The damper is not a resistance knob. A lot of people use it that way, but it actually has to do with your drag coefficient. As Hanna expained in her article where she spoke with Magda:

To calculate my best setting, Magda asked me to sit on the rower and start rowing as if I was going to do a 2000m. We started with the damper at a “one” setting and she would progressively increase it while keeping an eye on the number displayed on the screen for the drag coefficient.

Another athlete, Augustin Maillefer, an Olympic rower from Switzerland, attempted to explain to me how the use the drag coefficient to decide where to row. “For a strong powerful rower we look for a drag coefficient of about 132-135,” he said. “We use that damper setting for longer rows that require pacing. If it’s an all out short row (100-500m) then the damper setting doesn’t become so important.”

For more people, the damper setting isn’t something you’re ever going to deal with, especially if you are using the rower in circuit or interval workouts. The best generic setting is a three or a four. Just set it there, and leave it there. If you have intentions to become a competitive rower, or you just want to completely nerd-out on rowing for a while, then you can investigate your drag coefficient and the best damper setting for you.

For more on damper settings, check out this video from a Concept2 Master Instructor: