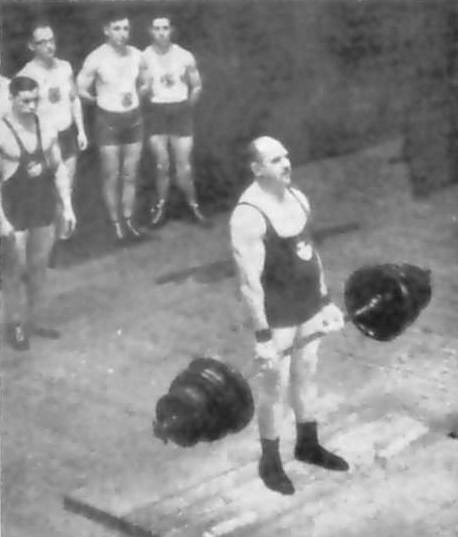 Hermann Goerner is not a household name, but he could easily be considered one of the strongest people of all time. Even amongst old-time strongmen he’s not as popular as some of the others like Eugen Sandow or Arthur Saxon. Yet he should be, as his strength borders on the unbelievable. To give you an idea of it let’s look at a few of his feats of strength.

This Man Wrestled an Elephant – Can You?

Goerner lived from 1881 to 1956 and performed with Pagel’s Circus in South Africa, where one of his stunts was to wrestle with an elephant. At the beginning of the tour the elephant weighed in at 700lbs. but by the end was over 1,500lbs. How’s that for progressive strength training? In fact, Goerner never said the weight of the elephant was a problem, but instead cited its rough hide, which would leave his skin raw.

Here’s some more of his strength feats. This is an excerpt from Goerner the Mighty by Edgar Mueller:

It should be stated that he was the only strength athlete in the world who, over a period of twenty years, could do at any time of the day or night, a Two Hands Clean and Jerk of 330 3/4 lb. on his Stage Barbell – without warming up! As has already been stated, this Barbell possessed a shaft of 2 3/8 in. in diameter, a fact which made this feat even more meritorious.

Although phenomenal with the more normal lifts, Goerner was a circus performer and thus did things that are rarely seen now. One of his challenge feats was a stiff-arm, one-hand snatch of 169.75lbs. This is amazing enough and far beyond the abilities of most people, but it was made all the more incredible when you realize it was done on a barbell with a 2 3/8ths-inch shaft! 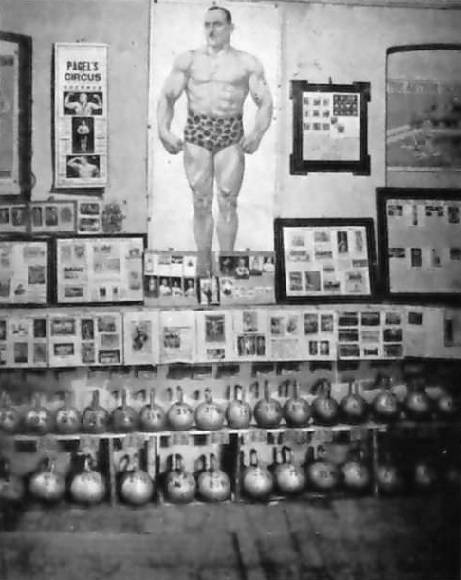 Another of Goerner’s challenges involved snatching a barbell with the arms crossed. If you’ve never tried this just go ahead and do it with an empty barbell and you’ll see how awkward it is. He did this cross-arm snatch with 231.5lbs.

Goerner’s kettlebell juggling feats are the heaviest in recorded history. For example, he did a triple flip with a 50kg bell. (That’s his gym, full of kettlebells, pictured to the right.) He also deadlifted 793lbs. and this was back in 1920 before the deadlift was popular and it was a lift that Goerner rarely trained in the regular manner. What may be even more amazing is his right hand-only deadlift of 727lbs.

Now that you have an idea of how strong Hermann Goerner was, we can take a look at how he got that way.

As with any person there were some changes in Goerner’s training over time, but what will mostly be covered here are the principles and methods he followed for the largest part of his career.

On average he trained four or five days per week. And these weren’t quick sessions either. As Mueller wrote, “Each training session averaged two hours when performed in the Club, and when training in the open air it would vary between three and four hours – sometimes even longer.”

Of course, in training for these long periods of time you cannot burn yourself out. Mueller went on to explain: 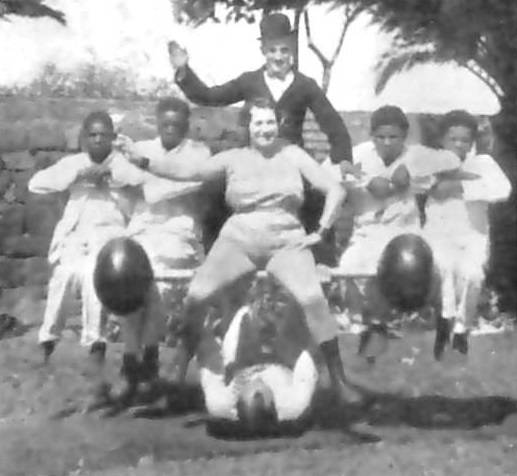 In performing the greater majority of his many amazing feats, [Goerner] very rarely exerted himself to anywhere near the limits of his astounding power. In many cases, he could have exceeded the lift he made at the time of performance by a further attempt, but this he always refused to do…He trained always as the mood took him – varying his programme to suit his energy and condition of the moment and never did he force himself to perform any workout when not feeling just in the mood…He did not have or follow what might be really termed a “set” training programme…He did, of course, use a planned and progressive programme but he did not, as many do, map out a certain number of lifts with a certain poundage and then perform them a set number of times for a given period.

Goerner trained in what might be termed an intuitive manner. He always worked within his capabilities, within the parameters of what he could do. It’s amazing to think that in all of his many lifting feats, they were likely not true maxes for him. While some strongmen always tried their hardest, Goerner always kept it easy.

Now the question moves on to what exercises did he perform and with what kinds of weights and volume? Muller provides the answer:

His inventive mind was always scheming out new and different ways of lifting all kinds of weights – kettlebells, dumb-bells, barbells, block weights, barrels, loaded sacks, etc.…Hermann favoured low repetitions – usually 3 and very rarely 4 – with the weight being increased by 5 kilos (10 lb.) after each set.

With that, we may boil his training down to a few principles that anyone could put into practice:

To give you an example of how this is all put into practice here is how Hermann Goerner trained his deadlifting.

In working with the deadlift, Goerner would use many variations. As you’ll see, tons of attention was put in developing tremendous finger strength. With the following twelve styles he would typically use four of them in a given workout, rotating which ones he trained.

Along with this, Goerner would work various shrugging and good morning exercises to help support his deadlifting and pulling ability.

As you can see this is done far differently than pretty much anyone else alive today. The focus on strengthening the hands first and on lots of variety allows for more progress in ways beyond just maxing out in the deadlift.