In the coming months I am planning to write a series of articles on some of my favorite old-time strongmen. This will include how they trained, their amazing feats of strength, exercises they used, and much more. (For an overview about these strongmen and why it’s valuable to look at what they did please check out my article Get Stronger Today with Lessons from Old-time Strongmen.)

The first article in this series is about Arthur Saxon, the Iron Master, who lived from 1878 to 1971. Here was a man who could lift 370lbs overhead with a single arm in the bent press. This is more weight than can be lifted off the ground with two hands by the majority of the population. This lift has never been matched by anyone in over a hundred years since it occurred. Some of Saxon’s other record lifts include a one hand snatch of 200lbs, a two-handed military press of 252lbs, a jerk from behind the neck of 311lbs, and much more.

Saxon traveled with a number of other performers including his brothers as the Saxon Trio, giving nightly performances demonstrating their strength. He was certainly a fan of heavy weight lifting. He said that when it came to training, the heavier the weights the better. But Saxon never thought that weights were the only way to go and his definition of strength included much more than being able to lift a heavy weight one time.

In his book The Development of Physical Power, Saxon stated:

It will be found correct in most instances to practice twice per week, and at such practices I advise that on each lift you commence with fairly light weights, and gradually increase the weight of same. Taking the double-handed lift, if your lift is about 200 pounds commence at 100 pounds, and with this light weight press overhead, then add 20 pounds and press again, and so on, until you are compelled to jerk the weight. Proceed until you reach your limit, then try another lift, say the snatch, commencing low and working up to your highest poundage.

As for what movements to work on, Saxon was a fan of doing all sorts of lifting:

Do not make the mistake of limiting your practices to any one set of lifts…Practice everything – single and double-handed press in dumb-bells and bar bells, single and double-handed lifts, all the way in dumb-bells and bar bells, snatching and swinging, jerking and pressing, lying down with weights, supporting weights, lifting weights while laid on the back, ring weights, human weights, and, if possible, double-handed lifts to the knee, and harness lifts, also holding the bell aloft and bringing a weight after with the disengaged hand, and raising bells aloft by what is known as the Continental style of lifting. 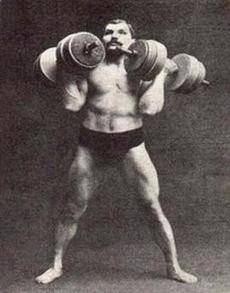 Notice Saxon’s continual use of the word practice. Arthur Saxon and his brothers often trained for several hours per day. If this is your approach, you can’t be burning yourself out and training to failure. Although training for long periods each day can’t be done by most people, as they’re not professional lifters, you can still approach your training with a similar mentality. In his Text Book of Weight Lifting, Saxon wrote, “If a man seriously proposes to go in for lifting heavy weights, he should make a point of practicing certain lifts every day. This daily practice is absolutely essential to the achievement of any real success.”

While training two to three times a week can work great for the average person to become more fit and strong, if you want to move beyond that you must change your approach, especially for the more technical lifts. Most of the lifts Saxon was a big fan of are no longer practiced and I think this is a mistake. Many of the lifts he practiced were with a single hand using a barbell or a dumbbell. Barbells are almost always lifted with two hands these days. But by lifting it with one, you increase the demands on the body. The barbell instantly becomes more of an odd object, rather than something balanced and easy to handle.

While the snatch and clean and jerk are still in use often today, the many related varieties are not. These same lifts can be done with a barbell in one hand or with one or two dumbbells. Each lift will be different and will provide for a well-rounded athlete. In fact, for the majority of athletes, doing unilateral training while using heavy weights in an explosive manner can be exactly what they need.

Not to mention going “outside-the-box” can be very fun to do. Take a lift that is rarely performed these days, like the bent press or a dumbbell swing, and practice it for four to six weeks to see what you can accomplish with it. And regarding the dumbbell swing, in the old-time lifting manner, it is quite different from the kettlebell swing commonly done today. It is like a snatch in that the dumbbell goes overhead, but the arm stays straight the entire time. Saxon explained: 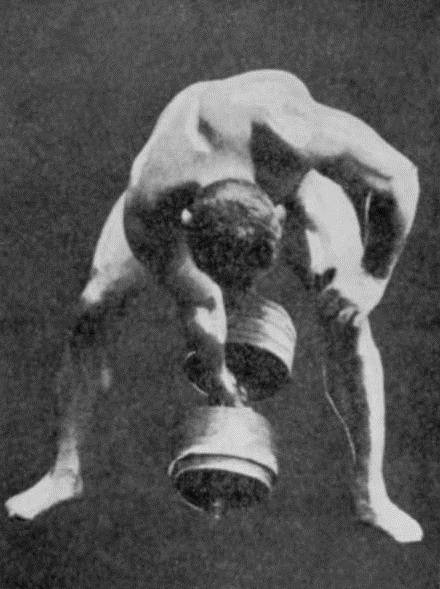 The muscles called into play are practically the same here as in the one-handed snatch, but the bell must be placed on and between the feet as shown in illustration. Keep the head down, then, with a perfectly straight arm, pull up, using a combination of muscular efforts and concentration as described in the snatch lift. Lean back and watch the dumb-bell with your eyes, and when it is at a suitable height suddenly dip beneath same and twist your wrist violently, so that you may place a straight arm beneath the bell.

Also note the starting position of the dumbbell, which is useful in pulling off this move. Go ahead and try this lift the next time you exercise and see what you can do. And remember this isn’t some new fitness fad you’re experimenting with – you’re using the knowledge of the old-time Iron Master, Arthur Saxon.