There I was (and this is how any good military story usually starts), my swim buddy Burt and I were in dive school and had just finished yet another training exercise. This particular event was a 1,000-meter timed swim in San Diego harbor and, like everything else we did, we always swam with a partner. Of course, the instructors would do anything they could to split us up. Losing sight of your buddy meant you would receive some “remedial education” on how this whole Navy diver thing worked. That usually meant lots and lots of push ups. So this instilled a sense of urgency if you didn’t know where your partner was during a dive and you basically became attached at the hip.

The night before, Burt and I were anxious about the swim. It was 1,000 meters, with fins and with no arm usage allowed (no front crawl or side stroke). He and I were the two fastest guys in the class and the sticking point for us was “the plaque.” There weren’t too many opportunities to individually excel in this kind of environment, but getting your name on the plaque was one of them. All you had to do was beat the time allotted and you got your name on the plaque that was mounted on the main hallway in the school. Of course, as the years go by the time gets faster and faster and nowadays I think even Aqua-man would have a hard time making it, but that doesn’t matter. What does matter is that my friend and I were literally one or two seconds away from infamy. And there weren’t too many names on that list, which made it even more coveted.

Burt and I were stressing because we had dug a hole for ourselves leading up to this event – with our attitudes. We were young, bulletproof, sons of Poseidon himself, and there was nothing we couldn’t do – at least if you asked us. To come up short after all of our talk would assure us a good hammer session. Beating that time would just be more ammunition for bragging and we had done enough of that to have the instructor cadre divided on who thought our attitudes were great and who thought we needed to be taught a lesson. School was about to be in session. 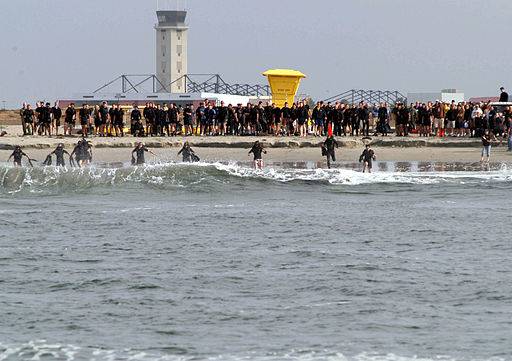 Burt and I hauled ass through the swim and when the instructor yelled our times to us there was so much white water from our celebrating that it must have looked like a feeding frenzy. We got out of the water and began high-fiving each other, laughing, and doing a white man’s version of the running man (complete with overbite). That lasted a minute or so and then we started yelling encouragement to the rest of the class still doing the swim. Of course, this was easy since we were already done. Then one of our instructors came over. “Eight counts, begin,” he barked. I thought we were in trouble for maybe missing a procedure in taking off our gear, but no explanation was given. If you don’t know what an eight-count bodybuilder is, think of a slow burpee with some extra leg movement. It sucks. At around twenty reps, he came back over and said, “I hate sideline cheerleaders and you studs are going to learn that you’re not done until everyone is done.”

We continued with our eight counts as the other teams in the class finished up the swim. That is, everybody except for Wally and his swim buddy. Wally was the kid in class who seemed to struggle with everything. He was motivated, like we all were, but there was just no way to squeeze any more “hooya” out of that kid. Think of Private Pyle in Full Metal Jacket, minus 300 pounds and built like a Slim Jim, and you have Wally. He drove me nuts. Of course, I was a whopping 170lbs and so skinny I seemed to be negative body fat, but that’s another story. 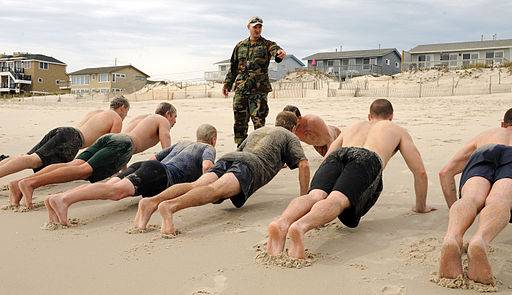 I lost count of the reps as Burt and I continued our eight counts, and I became focused on Wally’s obvious deliberate attempts to punish me. Somehow he knew that I was up there on the pier, suffering, and he was taking his time on purpose! How did he know? Did the instructors slip him a note in the water? Was this part of some plan to get me to quit? Was the whole Navy in on this joke? Was Wally planning on getting me shipped out to the fleet so he could hook up with my wife and raise my son as his own? My son will never call you dad! How did that S.O.B. get into this school anyway?

By the time Wally got out of the water I was furious. It didn’t matter that he was exhausted, I knew he had been a slacker and I had to do extra work for his weakness. When we were finally able to stop our remedial education I was so angry I could barely focus.

I want to say that I figured out the lesson at hand on my own, but I didn’t. Thankfully, one of the instructors saw how mad I was, came over and gave me the inside scoop on what was to be learned:

And of course, all of this was carefully explained while I was holding the push up position, just to make sure I was listening.

How does this apply to working out? The workout I’m going to share with you, like most of the stuff I put together, can be used with minimal or no equipment. The essential things are distance and a partner. I’ll explain this simple workout first, and then throw in some other options to keep it interesting.

We’ll set the workout up using a simple circle track at a school or you can use a set distance, like a place where you know what exactly constitutes one mile. You want to be able to mark out or note .25-mile increments, though. In addition to that, we’ll use a simple bodyweight exercise like eight-count bodybuilders, just like the ones we did on the pier that day. 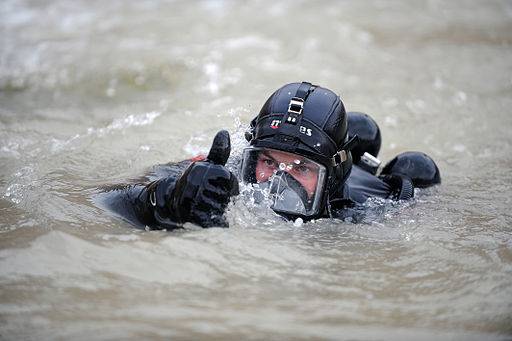 Person 1 begins his eight counts while Person 2 begins his first lap. The key to the bodyweight portion of this is to keep moving. Trying to hurry up and get to a certain number of reps won’t help because you don’t stop until your partner finishes his or her lap – no matter how long it takes. As the runner, the pressure is on you to run as fast as you can. However, sprint too hard in the beginning of your lap and you’re going to lag at the end. Of course, your partner is going to wonder what in the hell you’re doing slowing down when you started out running like your house was on fire. Pace yourself, and your partner will start contemplating cutting the brake lines on your car.

This is usually where the fun begins and the cheery “come on!” turns into “COME. THE. *$#@. ON!” Doesn’t your training partner know your portion of the exercise if the hardest? Don’t they know your part of the run is all uphill, andyour pushups are harder because your arms are longer/shorter, and you’ve got “exercise induced” asthma? You’ll start to wonder, like I did about Wally, if your partner is really giving their all. Of course they are and they will wonder why you’re such a crybaby. You can joke about it when the workout is over.

There is no rest between the running and the bodyweight stuff. Think of it like a relay and the transition should go from one portion to the next. This continues until you have run the entire distance. In this case, you both run twice for a total of one mile.

You can play with this workout in a couple different ways:

With this simple template you’ll be having great times with your clients in no time. Fun times and memories filled with camaraderie will be laughed about for years to come. And, more than likely, lots of profanity, name-calling, questioning of manhood, and possible derogatory ranting about family history will occur in the short term.

Wayne Fisher (also known as both “Fish” and “Scrapper” if you ever talk to him) has done a lot of things. He was a Navy diver for ten years, worked with the Navy SEALs for four years, fought in the first MMA fights in Hawaii (when it was bare-knuckle craziness), created and ran Body by Fish (which became the largest boot camp program in Hawaii), was a commercial diver, and has been offering bodyweight programs online since 2000. And he’s a perpetual wise-ass.

Wayne is the founder of Train for Strength and his workouts have been used by people from all walks of life. Weekend warriors, military members trying out for Special Forces selection, police officers, fire fighters, MMA fighters and coaches, and just about anyone can utilize his workouts. Having trained with some of the world’s best military personnel, the occasional strongman, and elite martial artists, Wayne has an interesting background. This keeps his workouts unique and challenging enough to generate more than enough emails filled with name calling and cursing - but usually ask for another more challenging workout.