The importance of the kick portion of the freestyle swim stroke is a highly discussed topic among coaches and athletes. Views range from those who totally ignore the kick (usually the athletes) to those who advocate spending lots of time on kick-only work. It is a polarizing subject that often focuses on the idea of propulsion to the detriment of the bigger picture.

The kick actually serves three important functions in the swimming stroke outside of just propulsion:

The importance of the kick portion of the freestyle swim stroke is a highly discussed topic among coaches and athletes. Views range from those who totally ignore the kick (usually the athletes) to those who advocate spending lots of time on kick-only work. It is a polarizing subject that often focuses on the idea of propulsion to the detriment of the bigger picture.

The kick actually serves three important functions in the swimming stroke outside of just propulsion:

How the kick is trained upon understanding all these factors becomes largely dependent on your event or sport. Let’s dive in, shall we?

In a fluid that punishes inefficiency, the ability to minimize drag is high on the radar for all swimmers. The kick helps reduce drag in several ways.

In freestyle, the kick is asymmetrical. The downward phase of the kick is more powerful than the upward, creating lift in the back half of the body. This brings the legs up and helps to optimize overall body position. Achieving optimal body position is key to drag reduction.

RELATED: 4 Common Swimming Mistakes and How to Fix Them

For example, if you’re swimming along with “sinky” legs that are low in the water, you are presenting far more frontal surface area, which creates unnecessary drag. You’re pushing a lot of water along and fighting against a lot of resistance. Conversely, a well-executed kick will lift the legs up into position right behind and inline with the torso, resulting in a smoother, faster stroke.

“To effectively create both lift and propulsion with the kick, athletes need proper ankle mobility and a kick that originates from the hips.”

“Well-executed” is the key phrase in that last sentence. To effectively create both lift and propulsion with the kick, athletes need proper ankle mobility and a kick that originates from the hips. Without both in place, a swimmer can actually create more drag and a lot of extra work.

Good, hip-driven rotation also minimizes drag by allowing the swimmer to become long and “skinny,” much like the hull of a speedboat. Without proper rotation, a swimmer becomes flatter in the water, like the wide hull of a barge, and winds up pushing a lot of water along rather than cutting through it. But excellent side-to-side rotation is more difficult to balance and requires extra stabilization. This is where the kick comes into play.

In a properly timed stroke, the most powerful of the down kicks coincides with the end of the pull phase, which helps to stabilize the body. That big kick completes a counter-rotation of the body that is initiated through the shoulders, core, and hips at the same time that the underwater arm pull begins (the “catch”). This initial motion generates a force against which we can pull our hand/arm more efficiently, creating a crucial bridge between our arm and our core.

You can only reduce drag so much. At a point, you move on to the task of creating and maintaining speed. The ability to remove dead spots in the stroke and sustain speed is crucial to a well-rounded stroke.

“A good kick lessens the loss of momentum, helping the swimmer make the most of the points in the stroke where front-quadrant propulsion is at its weakest.”

Properly timed catch and pull phases help on the front end of the stroke. A good kick lessens the loss of momentum, helping the swimmer make the most of the points in the stroke where front-quadrant propulsion is at its weakest. The more rapid the kick (e.g. a six-beat kick), the more constant the propulsion throughout the whole stroke cycle. 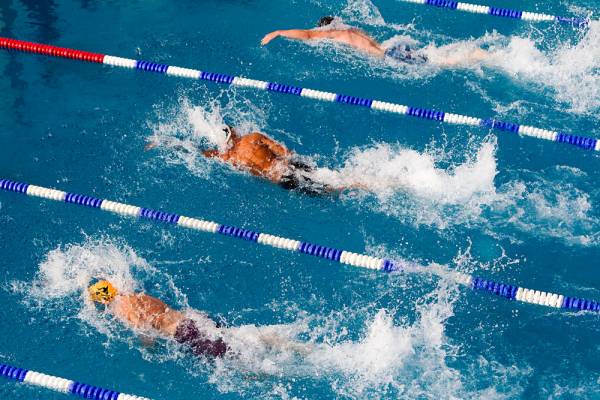 This becomes all the more important in open water where choppy conditions can create a battleground for momentum and require the athlete to punch through the resistance. The constantly changing conditions faced in choppy water also require more effort to maintain an efficient body position. A good kick paired with excellent stroke timing goes a long way into making this battle easier.

How Important Is Propulsion From the Kick?

We can’t forget about propulsion. Of all the strokes, freestyle is one of the most upper-body driven. In elite level swimmers only ten to fifteen percent of total propulsion comes from the kick.1 That’s not a lot. And how important that percentage of propulsion is to you depends on the demands of your event.

“In short and anaerobically driven events, the ten to fifteen percent gained from the kick can make the difference between victors and runner-ups.”

For example, a 2007 study published in the International Journal of Sports Science & Coaching concluded that despite improvements in 200m kick-only time trials, 400m freestyle times remained unchanged in both the control and experiment groups.2 For middle-distance races, there seems to be a disconnect from time spent working the kick and actual results.

On the flip side, sprint distance (200m and shorter) races can be won and lost based on this small percentage. In short and anaerobically driven events, the ten to fifteen percent gained from the kick can make the difference between victors and runner-ups.

How Much Kick-Specific Work Should You Do?

What is often left out of this discussion is how much kick-specific work an athlete should do within their swim sets. There is no simple answer, but the principle of specificity serves as a guiding light. As with any structured training plan, you need to train for your event and that training should become more specific the closer you are to your priority event(s).

RELATED: I’m a Triathlete, I Don’t Kick When I Swim

For example, if you are a triathlete who needs to bike and run well after getting out of the water, it is well-advised to practice kicking as much as is necessary to foster great technique. But developing kick fitness isn’t a necessity, especially with the kind of volume many triathletes put on their legs. In the early season, extra kicking sets have a place, primarily to improve neuromuscular control. But as you get closer to the event, endurance and front-quadrant output should take the cake. 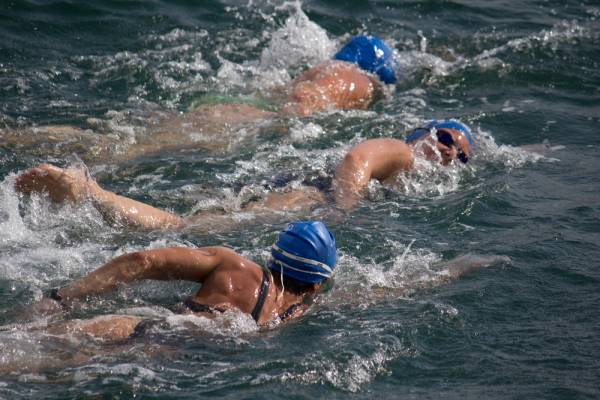 On the other hand, if you are a competitive short-distance swimmer, developing kick-specific fitness holds more value. Without the demand of two extra sports, more time can and should be spent on ankle mobility, technique, and kick-only fitness throughout your season.

Perhaps you have a swim as part of your CrossFit or mixed-modal fitness competition? Ask yourself how long the swim is and how much your legs factor into the exercises that follow the swim portion. Use the answers you come up with to sculpt your training plan.

RELATED: Swimming and the CrossFit Games: Why Is It Everyone’s Weak Link?

The Bottom Line on Kicking

The kick plays a dynamic role in the freestyle stroke. It deserves all the attention it gets, but more value can be found from developing correct technique than from the generation of leg output. As you wrestle with how much to train the kick, let the principal of specificity be your guide.

Shawn is a coach, endurance athlete, and writer with a (slight) obsession for testing the limits. Initially from a cycling background, Shawn moved into triathlon where the sport and people captured his heart, and lit a fire that eventually kickstarted his fitness career.

Shawn specializes in coaching endurance athletes and works with triathletes, runners, cyclists, and swimmers across the globe through his company Rare Air Fitness.

Helping people transform their lives with fitness and nutrition is Shawn’s other love. He is passionate about helping the everyday person become the best version of themselves. Shawn works with people who want to look, feel, and move better, and offers one-on-one and small group training sessions through his other brand, Shawn Gerber Fitness.

He lives in Wooster, Ohio (which is a great basecamp for all kinds of adventures) and believes the right number of bikes to own is n+1. He has way too many running shoes, is a strong believer in bacon and chocolate and, believe it or not, has never drank coffee.