You’ve probably heard people talking about this drink called kombucha. What the heck is it, and why would you want to drink it?

Let’s make one thing clear: science hasn’t found any conclusive benefits to drinking kombucha. But this isn’t to say that there are no benefits. A quality kombucha has beneficial bacteria and should be quite healthy, in theory. Unfortunately, the studies to prove it just don’t exist.

But I still like it, for reasons I will explain. First, let’s go over some of the basics.

Kombucha is a drink that is made by fermenting tea. It makes sense that it would be so popular, given all the recent buzz about fermented foods and gut health. Usually black tea is used, although you can also use a blend of different teas. The tea is brewed hot, sugar is added, and a SCOBY is placed on top.

This fungus-looking glob is the secret to making high-quality and delicious kombucha.

When the SCOBY is placed on top of the tea and sugar mixture, it is covered with a cloth and left to ferment. The bacteria eat up the sugar and forms an acid, much like a hard cider. Different brewing methods produce varying levels of carbonation. Flavors are often added, such as ginger, turmeric, fruit, and green algae.

You can make kombucha yourself or buy it in stores. One of the reasons that kombucha is popular is that these commercial brands are available. Once refrigerated, the “bucha” stops fermenting and can last quite a long time before consumption.

A Cure-All or Simply a Delicious Drink?

I’ve heard claims that kombucha is good for just about every ailment. However, since the scientific verdict is still out, I will tell you what I have noticed.

The drawbacks to kombucha are a few cases of reported illness. You have to be careful with fermented foods, since they are left out at room temperature to brew. Mold can easily grow in the same environment. So your SCOBY source certainly matters. Nevertheless, even with increasing popularity and more commercial brands, there have not been any widespread issues. Just make sure you know what to do and what to look for if you’re going to do a home brew.

As a precaution, I would advise anyone with a compromised immune system or who is pregnant to avoid kombucha or get medical permission. Kombucha is also an acidic beverage, so drinking with a straw would be helpful if your teeth are sensitive.

How to Make Your Own Kombucha 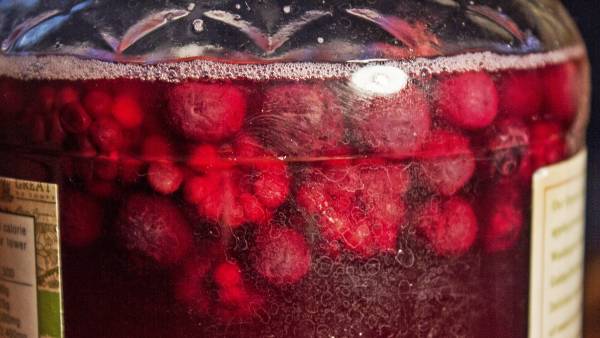 Making kombucha is quite simple once you get comfortable with the process. Here’s how to do it:

Wait about a week before testing. If you like your kombucha stronger or more tart, give it more time.

Toast to Your Health

There are many different brewing methods, but I wanted to give you an overview of the basics. Making your own kombucha will save you quite a bit of money, and it’s also a lot of fun. And of course, it makes for a great conversation starter when people come over and see a huge barrel with a strong, fruity odor.

Kombucha isn’t a savior of health, but can be part of a healthy diet. But don’t drink it just because you think it will change your health. Experiment, try different flavors, and most of all – enjoy.

Marc Halpern: likes to lift heavy things because of what it enables him to do elsewhere in life, like skiing and hiking. He doesn’t eat egg whites and lettuce for breakfast, he eats real food.

As a Registered Dietitian and strength coach, Marc's philosophy is to keep it reasonable and feeling good.Marc has over fourteen years of experience. He started his journey when he lost seventy pounds in high school. It began a career that has gone from New York, to North Carolina, all the way to Utah.

In addition to working with clients, Marc spends a great deal of time in Dan John’s Lab (aka garage) constantly looking for better ways to do things. He combines evidence-based practice with experience and real-life application.