Sex sells. The axiom I put forth is that in CrossFit, with a few exceptions, a female athlete is more likely to get noticed, develop a following, and be able to craft a brand if she conforms to the “sex sells” cultural dynamic. And that is wrong.

Last week I wrote about gender inequality in sponsorships, specifically within CrossFit, and the game women have to play in order to try to reach economic parity with men. I said, specifically:

Female athletes have to play two games: one, their chosen sport, and two, the game of attraction. Attractiveness, sexuality, and the willingness to use those qualities as marketing all figure into the equation of economic reward for female athletes.

Female CrossFit athletes are subject to the same system as women in other sports, and women in general. That system is set up to objectify them and to reward them for complying with its expectations. This is what Elisabeth Akinwale was suggesting when she said she shared sponsors with other females with less athletic ability but more willingness to market their sexuality.

Murph event at the 2015 CrossFit Games.

Interestingly, Andrea Ager spoke to this very phenomenon in a comment on the CrossFit Games post in response to Akinwale’s comments:

Money and advertising revolve around marketability. Sex sells because we live in a broken world. I too, notice which of my posts get the most likes.

I could start naming names, but trust me: it’s more than just the ones you’re thinking of. There are a lot of CrossFit athletes at varying stages on the walk of fame who seem determined to raise their brand awareness with self-objectification.

While it may be tempting to invoke the “shaming” call-to-arms here, I would urge the reader to hold off on defensiveness until reading the entire article. I get the shaming issue, and I am not suggesting that female CrossFit athletes shouldn’t have the right to post and pose however they want. I am suggesting, and research supports, that this actually hurts both those athletes and gender equality in the long run. 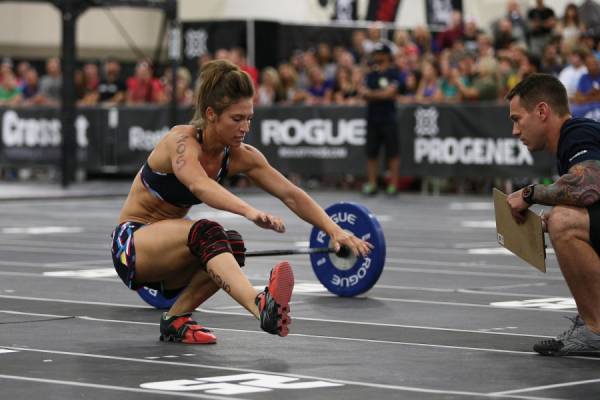 A False Sense of Empowerment

According to system justification theory, people are generally motivated to defend, bolster, and justify the status quo (i.e., existing economic, social, and political arrangements and institutions), and this occurs even when these social arrangements maintain group inequalities and preserve prejudicial treatment.

Translation: if you are among the “Hey man, sex sells, get over it,” crowd, you are justifying a system that objectifies women. Think about that the next time you’re tempted to use the “Get over it” argument.

Let’s examine a few more paragraphs from this paper:

System justification theorists argue that people come to view themselves, as members of particular groups, in the same way that the culture views and portrays them…The theory argues that repetitive and systematic encounters of sexual objectification eventually lead girls and women to internalize the sexual objectification, or self-objectify. The adoption of this particular cultural lens encourages women to view their bodies primarily in terms of their sexual value and attractiveness to others, rather than on their value and function for the self. A large body of research has confirmed that, once in place, self-objectification is associated with a variety of negative consequences among women, including impairments to intrapersonal, interpersonal, cognitive, physical, and mental health functions.

Translation: this is the crux of the matter, folks. When we live in a culture that objectifies women, women ultimately begin to internalize that culture and as a result, self-objectify. Women who do this may think they are empowering themselves to express themselves freely, but in reality the opposite is true. In fact, they become even more enslaved to the very culture that holds them back.

Investment in appearance as the means to self-worth and social status brings women in line with the system, which motivates them to work harder in the service of that system.

Translation: It’s a vicious circle. Once women are rewarded by the system that objectifies them they will work harder to maintain that status quo. It’s tantamount to throwing flowers into a volcano.

At a cultural level, we are steeped in the pageantry, sensationalism, and recompense associated with sexually objectifying imagery and behavior, which coaxes girls and women into appropriating their own sexual objectification. Indeed, some women report pleasure and feel a sense of power from being positively evaluated in objectifying environments. However, the positive effects seem to be short-lived and ultimately self-objectification is disempowering and debilitating for women.

Translation: 1,000 “likes” and 25,000 followers does not fill the need for affirmation. Ultimately, it has the opposite effect.

So what’s the answer? Doing what Elisabeth Akinwale and many others have chosen to do all along. Work to change the system, not acquiesce to it. This goes for women and men. Both have an equal, albeit different role in disentangling the complex, culturally steeped system that perpetuates objectification.

Finally, we would be remiss if we did not acknowledge that alternative depictions of women and men as more than mere bodies are necessary to disrupt the system of sexual objectification. This alterative imagery must communicate a less objectifying and more embodying representation of people’s talents and abilities, thereby changing the toxic media landscape that is part of the sexually objectifying status quo, especially in regard to the portrayal of women. Importantly, these images would also need to be paired with the message that perpetuating sexually objectifying imagery is destructive to our social system – destructive to raising healthy boys and girls, achieving greater intimacy and satisfaction within our relationships, and diverting attention from parenting, partnering, and/or productivity in our lives.

The “toxic media landscape” is what I’m talking about here. From CrossFit Inc.’s misogynous close-up booty short shots and “Turn 7s into 10s” messages, to sponsors who indicate preference for so-called hot spokespersons, to the men who consume the media in the form of inappropriate comments, shares, and howls, to the women who post and thus play the game – it’s a deeply complex and entrenched system that will require intent to unravel.

If, as Ager says, we live in a broken world, do we simply accept that reality, or challenge it? I say we challenge it. A practical guide to doing so, next week in Part III.