From a technical standpoint, the Rocky movies are some of the worst fight movies out there. But there are some amazing takeaways. Here are the five biggest lessons I learned from Rocky.

“Let me tell you something you already know. The world ain’t all sunshine and rainbows. It’s a very mean and nasty place, and I don’t care how tough you are, it will beat you to your knees and keep you there permanently if you let it. You, me, or nobody is gonna hit as hard as life. But it ain’t about how hard you hit. It’s about how hard you can get hit and keep moving forward; how much you can take and keep moving forward. That’s how winning is done!”

From a technical standpoint, the Rocky movies are some of the worst fight movies out there. As bad as an actor as Bruce Lee was, his ability as a martial artist was unparalleled both on film and off. Conversely, while Sylvester Stallone was pretty darn convincing as the character of Rocky, his boxing moves and that of his opponents (save perhaps those of the late boxer Tommy Morrison) left something to be desired. That said, there are some boxing takeaways from the Rocky series if you watch closely enough. You’ll also be pretty darned entertained in the process as the Rocky movies (at least the first four) never seem to get old.

Here are the five biggest lessons I learned from Rocky:

Let’s face it; Rocky was already washed up when the Rocky series began. What changed is that The Stallion found his mojo (falling for the girl in the pet shop), found a little luck (getting a random title shot), and found his trainer (Mickey). Rocky also has a secret weapon – heart. He ends up losing his title shot but just barely. Rocky goes the distance with world champion Apollo Creed because of one thing and one thing only – heart.

What drove me to the martial arts and boxing in the first place is the principle that heart matters. In most sports, talent matters the most. You cannot will yourself into being a good basketball player, but in boxing it’s not all about talent. No one exemplifies this quite like the character of Rocky, and in fighting, heart matters, more than anything.

2. Keep yo damned hands up!

While watching Rocky can show you what it means to have heart, I also think watching the Rocky movies shows a good example of what not to do. Particularly as it relates to the hands, the Rocky movies show beyond bad form. I have never seen a poorer display of boxing hand positioning than in these films.

The first lesson any boxing students learn is to keep your hands up – always. One hand should literally be touching your jaw at all times. Specifically the right hand (for orthodox fighters) is wired to the jaw or “on the phone” as my professor would always say. This never happens in Rocky, as the hands are everywhere except up. It makes for great film and entertainment with the fighters just pounding each other senseless as there is always an open target to hit. In real boxing though, unless you’re as fast as Floyd Mayweather, Jr., you best have those hands real close to that jaw.

3. It’s all about footwork.

Muhammad Ali wasn’t stronger than his opponents. He wasn’t necessarily bigger, either. While he was savvy and mentally as tough as anyone, his real mastery was his footwork (widely considered the fastest and best of all time.) When Rocky went down to the beach to train with Apollo, he stepped up his game. While he was always a tough fighter with heart, he didn’t become a great fighter until he developed the most important skill in fighting, footwork.

Apollo could dance and punch fast and run his mouth, whereas Rocky was tough as nails and slow as molasses. Once Rocky started to dance, he was a force to be reckoned with. Instead of fighting like a slow (but tough) Italian, he started developing actual rhythm. (Of course it didn’t hurt having one of the greatest songs of all time to assist his rhythm with Survivor’s Eye of the Tiger!) Toughness with footwork is a pretty nasty combo as Ali demonstrated for real and the fictional Rocky showed us in Rocky III. 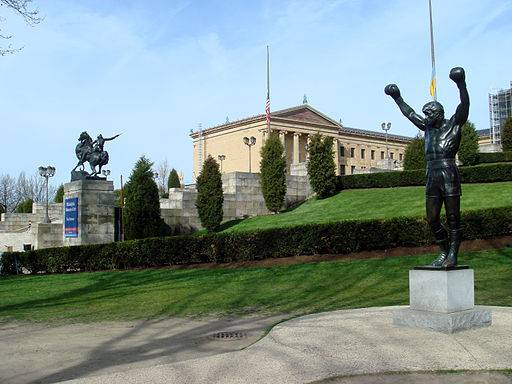 One quotation that I do borrow from the Rocky movies for my boxing students is from Apollo Creed’s trainer Duke. Duke would bark to “Stick and move!” I like this simple breakdown of one of the main principles of boxing – always moving, whether it be hands, head, or feet. The problem for many is in putting them all together, sort of like walking and chewing gum at the same time. Stick and move pretty much sums it up. Plant your feet, transfer your weight, and punch – then move! As soon as your last punch lands you better be moving your head, your feet, or both, pronto.

Rocky wasn’t anything as a fighter until he got his lucky break, but he also wasn’t anything until he started training with Mickey. The right coach (or school, or gym) is hugely important. On the other hand, the wrong coach or environment can be corrosive and corruptive. People wonder why boxing has diminished in popularity over the years. In large part that has to do with the nefarious characters who have been in and around the fight game (see Don King). Mike Tyson would likely be considered the greatest boxer of all time had Cus D’Amato lived to continue to train him throughout his career. Cus was not only a great trainer but like a father to Mike.

Though boxing is ultimately a lonely sport as it’s just you and your opponent, people matter. You need to know that ultimately you have someone in your corner, both literally and figuratively. If you’re not at the right school, boxing gym, or around the right coach, you need to find someone who knows his or her stuff, cares, and has his or her heart in the right place. Once again, both in and ring and out, Rocky teaches us that heart matters.

Sylvester Stallone photo by Towpilot (Own work) [GFDL or CC-BY-SA-3.0], via Wikimedia Commons.