In recent years we have all grown accustomed to a wider and wider range of fitness equipment. This is due to a large market segment interested in such goods combined with the economic power of that market. You younger trainees may take this situation for granted, but us old-timers can remember a time when the choice of equipment was narrow and, worse yet, poor in quality.

A Tale of the Flat Bench

Let’s take a simple thing like the flat bench. These were first manufactured sometime in the 1950s, I believe. They were touted as the greatest thing since sliced bread. Prior to the introduction of the flat bench, athletes did this lift from the floor with the arms jammed up at the bottom. This considerably cut down on the potential of the exercise for the elbows have to be below the chest to get the bar off to a good start. So, some genius in one of the equipment companies finally designed a flat bench that people could order (for a nice price of course). This was much better than before because a full push off the chest was now possible.

There was still only one big thing wrong with this invention. Our best presser now had to somehow find a way of getting the bar to the starting position. One way was to use dumbbells. In those days, dumbbells all had to be screw tightened on all four ends. The collars were a pain to keep tight as well. They were notorious for coming undone at the wrong time. Your dumbbells soon turned into a pair of kettlebells.

Another solution was a rather gymnastic one. You had to clean the bar, sit down on the bench, and then do an eccentric sit up down to the bench. Once your back met the bench, you were ready to start pressing. The big problem was that this maneuver used a lot more muscles than the modern bench press, but it didn’t exercise the actual benching muscles enough. Most people can bench press a lot more than they can power clean, especially when they have to lay down with the weight afterwards. So this wasn’t much of a solution.

Thus, the best option was to have a couple of training buddies hand you the barbell after you got on the bench. If you were training alone, then parents or siblings were often recruited. Needless to say, they didn’t stay recruited long for they ended up getting a just as good workout as our trainee.

The Invention of the Bench Plus Rack

Finally, someone decided that racks would be the ideal solution. Some used the standing squat racks, if they could be lowered to the proper height, but most wished to have racks attached to the bench itself. While this was a major improvement, the racks still had a ways to go. Sometimes they were not adjustable, so lifters who were too short were out of luck. It wasn’t so bad if your arms were too long, but you often ended up doing half of bench before you even started your descent. 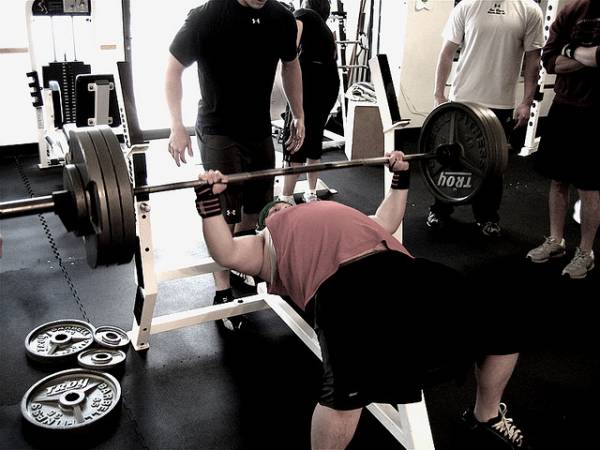 The biggest problem with these racks, though, was their width. In the 1950s and most of the 60s, the racks were placed at roughly shoulder width apart. Now this could work fine with the novice trainee who didn’t have much weight on the bar. But loading and unloading a bar requires the plates be unbalanced at some point. If the difference in weight from one side to the other was too much, then the bar and weights would go flying down on one end and flipping up perpendicularly on the other – perhaps causing some nasty damage to the floor, equipment, and lifter.

The cynics among us sometimes thought the racks were kept narrow by the manufacturers because that made the whole apparatus easier to ship. And it did, for the whole box was much narrower.

The Input of Powerlifters

Around the mid-1960s the sport of powerlifting was established. Those athletes were very competitive and soon discovered ways to make their training easier. One of the first things they did do was make their own benches. And the first thing they did was to move the racks out almost to the collars. This allowed unimpeded gripping of the barbell and the rack could handle fairly significantly unbalanced loadings without tipping over. These racks caught on and soon the manufacturers fell into line. Nowadays most all companies make wide racks in response to consumer demand and the demands of sport and training.

Another problem in the early days with flat benches was their construction. They were pitiful and thin tubular steel useless for anything above a 100-pound bench. Since they were the only thing available, a common fear among bench pressers was that one day the bench would collapse, leaving them in the horrible condition. Some companies did make better equipment that has much more solid, but it also was that much more expensive, and you had to order it from the factory. So a lot of people took the easy way out, went down to the department store, and bought the piece of garbage that was available. (And prayed a lot, too, I suppose.) 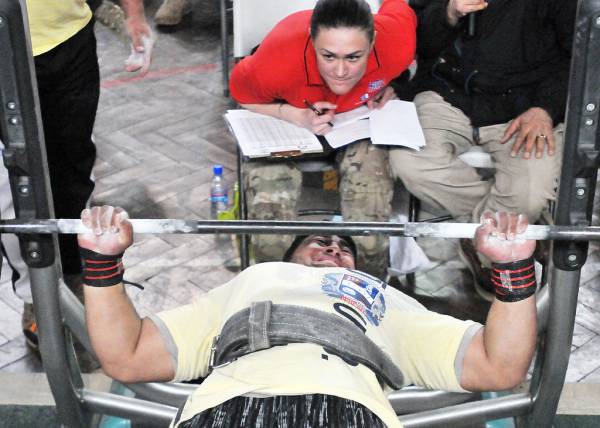 Many serious lifters in those days did not trust the equipment manufactured and had little patience to wait for the delivery times. And, more importantly, lifters had their own ideas as to what the perfect bench would look like. So, many lifters simply made their own and were quite happy with the results. Ironically, now the equipment manufacturers are making much better equipment that looks an awful lot like the homemade equipment we first saw in the 1960s. We also now have many more manufacturers and a lot bigger market for all kinds of exercise equipment. The business is competitive and everybody wants to be the first to market the next big thing.

While many might think they cannot improve the flat bench much more, you never know what feature trainees might demand out of the equipment. In such an environment, the consumer is indeed king (or queen). So if you have any ideas on how to improve equipment please do not hesitate to let the manufacturers know. They will be richer, and we will be stronger.