Many weightlifters at one point or another in their careers will experience the phenomenon of “blacking out.” This will most likely occur in lifts where the breath is held for a longer than normal time, such as in a military press, squat clean, or squat. It is a strange feeling, one of quickly, but not suddenly losing consciousness. It difficult to describe, but it seems that the world is in slow motion and you have difficulty continuing your movements. You don’t always lose complete consciousness. It is often possible to catch yourself, take a breath, and recover. At other times you may pass out.

Biochemical Causes of a Blackout

The medical professionals refer to this phenomenon as syncope. It occurs when insufficient blood gets to the brain. It is similar to the workings of sleeper holds used in wrestling and judo. In the case of a weightlifter, there may be several underlying causes.

One of these causes is dehydration, which lowers your blood pressure, which in turn can lead to blacking out due to less blood traveling to the brain. Treatment here is obvious: stay well hydrated during your workout. This is especially important if you’re working out in conditions of high heat or humidity. At one time it was considered by football coaches that not drinking during summer two-a-days would toughen up their athletes for the coming season. After a number of football player deaths, we have now thankfully moved beyond that ridiculous way of thinking. If you are in an overly heated environment, find a cooler, preferably air-conditioned, environment in which to rest and cool off.

Another possible cause is low blood sugar. This, too, restricts the blood flow to your brain. The treatment here is again obvious: don’t train on an empty stomach. Grab a bite to eat that is high in carbohydrates or sugar, such as bread or fruit juice, to restore blood sugar levels.

Mechanical Causes of a Blackout

Probably the most common cause of blacking out in the gym is mechanical, not biochemical. The lifter either holds his breath too long or the barbell is held tight to the carotid artery, thus restricting blood flow. In normal situations, an athlete can grab a breath between reps or take a big breath at the start of a single. Most lifts do not last long enough to get in trouble.

An exception to this is the various presses, whether military, incline, or bench. If the lifter is fighting the lift too long, long enough that he runs out of breath, a blackout is indeed possible. This is due to some combination of not enough breath and breath held too long. In the old days of the Olympic press, I once saw an athlete putting up a good weight after a hard time through the sticking point. He nearly had the weight overhead and suddenly his body gave way bit by bit. Due to the fact he had the bar out front of him, he was pushing in that direction so was safely pushed away from the bar as he lost consciousness. Thus, he was clear of the barbell after it had made its drop straight down. You may not always be so lucky. 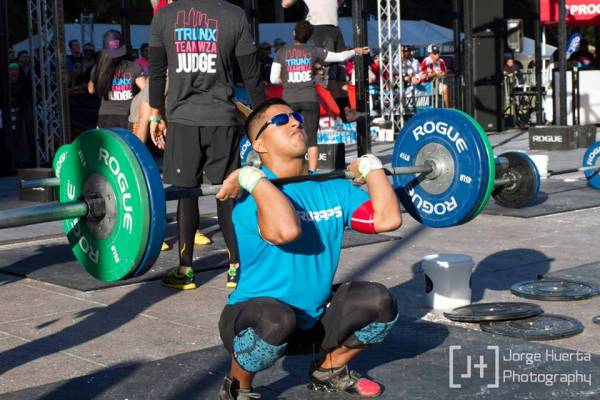 I, myself, once started blacking out on a limit squat clean. I had a bit of difficulty coming out of the bottom, but I eventually made it up. Just as I was standing and getting ready to jerk, I started feeling strange and shaky. I dropped the bar and took a few steps, which felt very funny. I did not lose consciousness, as by then I was starting to breathe again. The blackout process was halted.

It should be obvious now that if a blackout can occur on the front squat portion of a lift it can also occur on a back squat. All you have to do is blackout on one squat and the high price of a power rack will suddenly become unimportant. This is yet another reason why spotters are a good idea when doing bench presses or squats.

A Blackout in Competition

I have also seen weightlifters black out after the clean was safely made, but while waiting too long to attempt the jerk. Because the bar was squeezing their carotid, the lifters ran out of oxygen. The most spectacular in my memory occurred at the 1984 Olympics in Los Angeles. The Canadian 100kg lifter Denis Garon (pictured below) had made a 192.5kg clean on his second attempt and was taking a long time to start his jerk dip. Suddenly, his legs gave way and he started to topple backward. Stubborn young man that he was, he held onto the barbell as he was blacking out. He hit the floor and the barbell was right behind, threatening to sandwich him and cause a horrific crushing injury. Fortunately, he held the bar close to his neck and even when falling to the platform there was lots of room between neck and barbell and no arm was jammed. He lay there on the platform for what seemed like forever as he caught his breath and then gathered his thoughts. Emergency medical staff had jumped up on the platform, sure they had just seen someone take a potentially mortal fall. Fortunately, that is not what happened.

After this heart-stopping pause, Garon jumped to his feet and then did what nobody expected him to do. He went right over to the speaker to demand the same weight again for his third lift! The average person would be so shaken up by such a near calamity that they would not even want to bother or if they did would be sure to miss the lift again. But then Garon lifted the weight perfectly, much to be joy of the crowd and to the relief of all the young girls in the audience who had taken him to their hearts. A fantastic show of courage.

What to Do After a Blackout

The treatment for breath-holding blackouts is again obvious. If a blackout was minor and you experienced only a momentary loss (or near loss) of consciousness, then halt your workout and rest. Drink some water or an electrolyte-enhanced drink to replenish your vital fluids. From a psychological standpoint, it will also be important to get back to lifting as soon as possible so the experience does not affect your courage adversely.

The biggest hazard you may face is not the blacking out itself. It is the possibility that you might land on some nasty gym equipment, which tends to be hard with ninety-degree edges. This can cause more serious injuries that the blacking-out process alone. If so, check yourself for injuries and seek medical attention if necessary. And use spotters on the lifts where they are needed.

Covering your basic needs before exercising can help you avoid blackouts. Start hydrating the day before vigorous exercise, and drink one to three cups of water before you exercise. Take deep breaths before each lift and don’t take too long to complete them. If blacking out during exercise happens more than once in a training session, consult a doctor. This could be the sign of something more serious. You might also want to look at any medications you are taking. You never know, these might also be a contributing factor.