How to Be a Stronger, Fitter Grappler In 80 Minutes Per Week

Because you’re a grappler you’re probably already short on training time and nursing an injury. For this reason you need a training plan that provides a lot for a little. Read on!

Are you a grappler who strength trains or a strength trainer who grapples? If you plan to be successful on the mat you better figure it out pretty quickly. For those who can’t tell the difference here it is:

A grappler is someone who is only concerned about on-the-mat performance. All of his or her training is geared towards one thing and that is having his or her hand raised at the end of a match. Strength work, conditioning, and anything else that isn’t specifically about grappling are only added to improve the grappling.

A strength trainer, on the other hand, cares only about the gym or his or her competition lifts going up. Everything else he or she does is merely assistance work – sled pushing, weighted walks, and even grappling are simply active recovery methods to help he or she lift more.

If you’re the second one, the strength athlete, then you can stop right here. There’s far more educated and experienced people you should be following for those pursuits. But if you’re a grappler read on.

If you’re a serious grappler there are a few things about you I can already tell:

Because of these things, you need a strength plan that is going to provide a lot for a little. I’ve used the following plan with many grapplers over the years and it’s always amazed people how much benefit they get from what seems like such a simple plan. (I’ve even had two of the guys who were doing it accused of being “on” something when it came to tournament time.)

The routine is straight blast simple – get ups and push ups and swings.

If you compete in grappling and aren’t doing get ups you’re leaving cards on the table. The get up is a great tool to keep your shoulders healthy and/or check out how well you’re moving for the day. It even has similarities to movements founds in grappling, such as sit outs, sit up sweeps, and even hip escapes.

I always wonder why we skip past push ups so quickly when training clients. At Hardstyle Physical Training they are a staple with our clients for many reasons – they teach you to hold the body stable in the plank position while the arms are producing force. This, according to Sahrmann, is the essence of core stability – the ability to maintain neutral spine while the limbs seek to perturb it. Not only that but they are also an excellent shoulder health exercise and there are some interesting ways we can vary them to add more to our workout. More on that in just a bit.

Swings are there because, well, it’s the swing. The hip power developed from the swing can build an explosive shoot for takedowns, a strong bridge, and also develop the upper back just as the deadlift does, but we get the added benefit of conditioning on top of that. 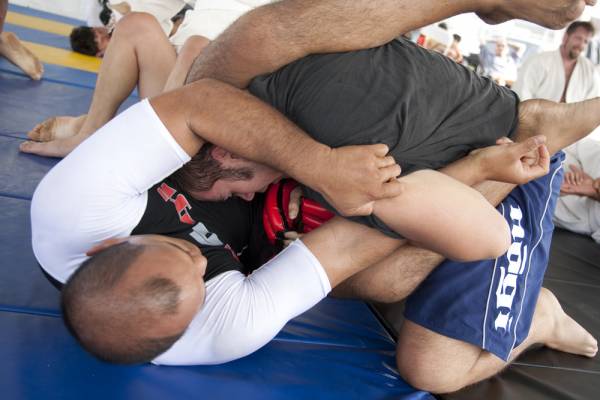 Conditioning has another side to it, too – unrelated to your actual condition. Have you ever watched a good fighter breathe? Next time you’re watching MMA or a BJJ match have a look at both fighters. I will guarantee the guy winning looks calm and relaxed and the guy losing not so much. This may seem obvious, but the relaxed manner of the eventual victor’s breathing is very important.

Hardtsyle training has two sides – tension and relaxation. This exists in grappling, too, where you may be flowing around your opponent before bursting to secure the takedown or consolidate position as you pass. That ebb and flow, of short hard bursts before periods of lower intensity flow are important to match in training, too.

When I first started training with kettlebells I was still grappling and looking for ways to make myself better on the mat. I came across many articles from many people all proclaiming to have the definitive answer to my issues. My issues were simple – I was, at best, a decent blue belt, and as such would get pounded on by everyone in the class better than me. In other words, my problems were not conditioning related, although I did find that I would tense up and run out of gas quickly.

Try this for an experiment – see how long you can wrestle while holding your breath. No matter how good you are pretty quickly you’re going to need to breathe. So my research started looking more and more into breathing. I started to realize that grappling is actually a lot like swimming – the moment you tense up while breathing, everything else stiffens up and you drown (or get tapped).

What happens is that instead of using your diaphragm to breathe you rely on your traps and other upper body muscles to do the job for you. Try it now – look in a mirror, open your mouth wide and take short, sharp breaths. Notice your chest rise? Muscles only like doing one thing at a time and if you have your shoulder girdle tied up in your breathing they won’t be much good for anything else. Now try it breathing deeply and rhythmically into your belly. Hopefully nothing moves, keeping your shoulders and neck free to help you secure a submission or open up an escape.

So with our grapplers we started using a swing and Hindu push up workout that just turned out to be fantastic. The start of the workout was simply twenty minutes of get ups. Just performing one on each side with a decent weight. Men should be aiming to do this with a 24kg, ladies with a 16kg. The goal should be around seven or eight on each side in the twenty minutes.

After a short break we moved onto supersets of swings and Hindu push ups. Using a heavy bell for swings, such as a 32kg for men and a 24kg for girls, we’d do sets of ten. The breathing for this was as normal – exhale forcefully on the power phase of the movement, as you stand up. 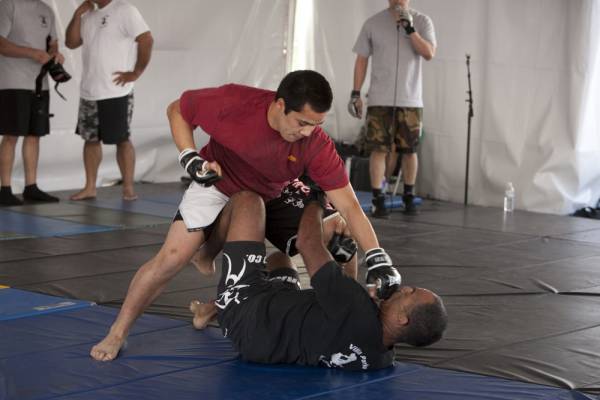 But on the Hindu push ups we experimented with breathing in a relaxed fashion, flowing through the exercise rather than going as fast as possible. A long, slow inhalation through the nose into the bell on the downward phase into the cobra position followed by a slow exhalation as the body bends into the top/downward dog position worked wonders.

Going from moments of hard and fast swings to slow and methodical allowed our guys to train and train and train – and looking back at it now, it was merely a way to force my guys to use a similar ideology to the MAF 180 rule. The byproduct was that after four to six weeks they all started reporting greatly enhanced mat fitness. More importantly they weren’t getting hurt. Time off the mat means your opponents are increasing their skills while you’re out on the sidelines.

The best part was that we were only doing this twice per week. A total of eighty minutes training time for the week left the guys plenty of time to recover, get on the mat, and still be fresh, yet improving, for their main training sessions.