This week’s article is mainly for the newcomers to the Olympic lifts. One question that most people have when they first start to learn the snatch is, “How wide should the grip be?” This question is especially important to newcomers whose only previous contact with the weights has been with dumbbells or the standard barbell exercises that use a shoulder-width grip. The wide grip used in the snatch seems a little unnatural to them.

The Difference Between a Narrow and Wide Grip

The exact width of grip has been heavily influenced by the style of pulling used at the time any particular grip was recommended. In the old days when snatching was accomplished mainly by back-and-arm pulling, grip width was a trade-off between the lifter’s gripping and pulling strength, pulling distance, and shoulder flexibility. What this translates into is a choice between taking a narrow enough grip to obtain good purchase on the bar, but wide enough that shoulder flexibility is not impinged upon, while keeping pulling height to a minimum.

If you took too wide a grip, then with the arm pulling tactics used in those days made it difficult to move the bar very far. But if you moved your grip in, you could certainly hold on to the bar a lot better but then potentially have problems locking this thing out overhead. And the pull was longer. In those cases, lifts were often lost frontwards if the flexibility was insufficient or lost at the back door if the grip was too wide and flexibility was too extreme.

Nowadays when the so-called pull is mainly a push from the legs, grip width considerations for the snatch are somewhat different. Certainly sufficient gripping strength is still important, as it is all lifts. It should be remembered that the wider the grip the fewer fingers there will be that do any significant work in gripping the bar. Collar-to-collar grips for some lifters will mean that only the thumb and first two fingers (the pointer and the middle finger) are doing any work. The ring and baby fingers are just along for the ride. Move the grip in and the ring finger will come into play, and further still at some point the baby finger as well, but even with a clean grip those last two fingers are doing less work than the other three.

I remember this myself many years ago when my summer job had me operating a jackhammer. After a relatively short time on the machine being shook up all day, it started to affect my gripping strength. I was holding onto the machine for long periods of time and eventually realized that, especially in my baby and ring fingers, I had no gripping strength whatsoever. It apparently had done something to the nerves in those fingers that activated the gripping muscles. I even had to enter competition during that time and still had enough grip to set a personal record on my clean and jerk, proving that those last two fingers did not do too much work. I was also still able to snatch since those fingers did even less work there. Fortunately, I was soon taken off that machine and my gripping strength returned to normal. 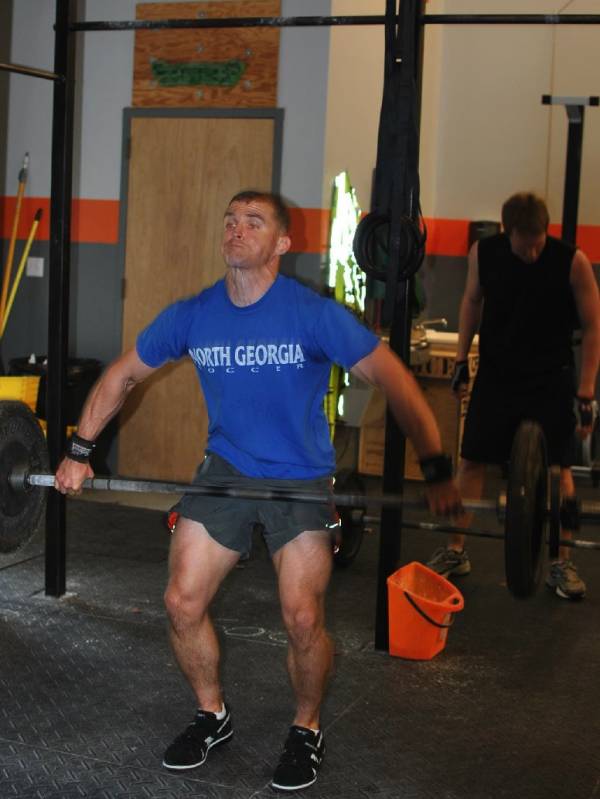 With the modern pulling style, arm-pulling is no longer significant. It’s all in the legs, fortunately. This has one valuable advantage. It means that wider grips can now be contemplated if necessary. You will still need sufficient gripping strength in your middle and index fingers and the thumb, but bicep-pulling strength is no longer so important.

This is also good news for those who have problems with shoulder mobility or those tall athletes with long arms. The latter will want to take a wider grip, in absolute terms, of course. They will still be limited by the 1310mm inside dimensions of the bar. Nevertheless, many lifters still opt for narrower grips, and many coaches still have their recommendations as to grip width.

And so what are these recommendations? Every coach seems to have his or her preferred method of calculating grip width. One recommendation is to extend the arms out sideways as if demonstrating your wingspan. Have somebody measure the distance from one elbow bone to the other. That’s how wide you should snatch. This is a good rule of thumb (pardon the pun), but what its supporters don’t consider is the relative lengths of the humorous and ulna. Those with long ulnae are going to have more problems with this grip. Those with shorter ones will have fewer problems. Another recommendation is holding the arms at a certain angle to the trunk. This works on a rough-and-ready basis, however the angle is often difficult to measure precisely.

Both of these methods still have to be adjusted according to the lifter’s current gripping strength and flexibility, and on a purely subjective basis – just what feels good to the lifter. Coaches supporting either method always temper their recommendations by allowing the lifter to move his or her grip in or out from the standard in order to find the ideal gripping width.

Today things have progressed on, especially under the influence of the new pulling styles. What many are advocating now appears to be somewhat more practical than older methods. Coaches now ask the lifter to hold the bar, stand up erect, and then move the grip in or out until the bar rests at the point where it should contact the hip joint at the start of the second pull.

This will be the best possible biomechanical position for sending the bar on its path overhead. If the hands grip the bar at a narrower position, the bar will then rest somewhere on the upper thighs. At that point the thigh is effectively made shorter and therefore is less efficient. If the grip is moved out wider, resulting in the bar coming to rest above the hip crook, that will also be less efficient and at the same time the lifter will probably be holding the bar at such a wide angle that he or she is going to have flexibility problems and pulling mechanical problems.

So aim for that hip crook. This is your best mechanical position as far as the legs are concerned. Hopefully it will be also comfortable enough from a grip standpoint. If the grip is not strong enough at that position, two things have to be done. Number one, you better build up that grip strength. That will take a little while. Number two, in the meantime you may have to pull your grip in a little bit. This will sacrifice some pulling strength, but the bar will feel a little better in the hands for the time being. But keep working on your grip so you can move your hands out to where they should ideally be.

Finally, as with the older-fashioned snatch grip advice, your ideal snatch grip is going to depend on your gripping strength, your flexibility, and your mechanical efficiency. And just like in the older days, that is determined more by trial and error than by any formula. Lifters will eventually find their ideal grip in that manner. At least today we have this hip crook area to serve as our initial guide.

Next week: Tips on the jerk grip width.