How to Get Started with Kettlebell Juggling

When it comes to the kettlebell, most of the great benefits come from doing ballistic exercises. As far as these go, kettlebell juggling is simply the next evolution.

Kettlebell juggling is an unconventional method of training. Although kettlebells have gained in popularity over the past decade, most people are unfamiliar with this particular style of training.

Kettlebell juggling is an unconventional method of training. Although kettlebells have gained in popularity over the past decade, most people are unfamiliar with this particular style of training.

First off, kettlebell juggling doesn’t actually involve juggling kettlebells in the same way that you would juggle balls, clubs, or chainsaws. Instead, to juggle a kettlebell involves releasing and catching the kettlebell with all manner of spins and flips around the body.

When it comes to the kettlebell, most of the great benefits come from doing ballistic exercises.

The kettlebell doesn’t offer a unique benefit when you’re doing a press or a squat, as compared to using a dumbbell or barbell. There are some differences, but in these exercises the differences are minor.

Part of the benefit a lot of people experience with kettlebells is simply because they start training with more whole-body exercises, rather than the isolation exercises commonly done in most commercial gyms.

As far as ballistic exercises go, kettlebell juggling is simply the next evolution. But it’s not only for advanced practitioners. In fact, I’ve taught people who are beginners with kettlebells the basic juggling moves and they’ve been able to get started right away.

There are a few reasons people don’t try kettlebell juggling. First of all, it looks amazing and most people think they couldn’t possibly do anything like it. When you see a master at his craft, you have to understand that it took a long time to get there. Kettlebell juggling is no different.

But the truth is you can get started with the basic moves right away and by the end of this article you‘ll know how.

Kettlebell juggling also looks dangerous. Now, I will admit that it is more dangerous than the average kettlebell movements or other forms of exercise. The potential is there to have a kettlebell land on you.

But part of this training is that you build faster reflexes and coordination so you’re able to avoid the weight when it does come crashing down.

Secondly, by working all of the odd angles and awkward movements you’re actually injury proofing your body.

By starting with a light weight and building up to more complex moves your body is able to handle forces that might make “normal” people scared.

For a long time I was able to make the claim that I never hurt myself kettlebell juggling.

But then I finally did hurt myself when I tried a very complex trick (picture doing a cartwheel with a kettlebell in hand) with too heavy of a weight. But I’ve never dropped the kettlebell on my foot.

A common idea is that juggling should be done with steel-toed shoes, but I’d rather have my feet be able to move quickly so I like to be barefoot.

The last thing that stops many people is that kettlebell juggling pretty much has to be done outside. If you do it indoors, then you better have thick rubber mats to protect the floor (and then be careful of the resulting bounce).

You need the mats because the kettlebell will be dropped, over and over again.

And unfortunately not everyone in the world has the great weather I personally have in California. Kettlebell juggling can still be done in the rain and snow, but it just can become that much harder to do.

Now let’s talk about some of the benefits kettlebell juggling brings you that the normal kettlebell ballistic exercises don’t.

The Benefits of Kettlebell Juggling #1: Explosives Strength from All Angles

The regular kettlebell ballistics are great in building hip extension and the posterior chain. In fact, there may be nothing better for that. But kettlebell juggling builds on top of this. Not only are you getting those same benefits, but also even more as you begin to move outside your centerline and in front of you.

When you go outside your body, side to side, and even throwing kettlebells behind you, you’re building strength in more than just that straightforward path.

A simple flip of the kettlebell can also be trained to the point of efficiency, but it will always take more effort than the swing itself.

And when you move into some of the more complex stunts, and definitely when using a heavier weight, you’ll see just how quickly the endurance is jacked up. 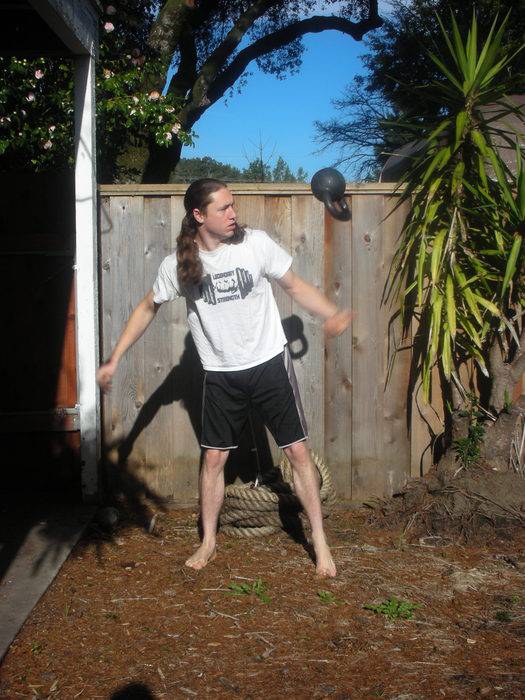 I commonly find with kettlebell juggling that it catches up to you. During your set you aren’t paying attention to your breathing too much as you’re focused solely on the bell, but when you stop the set or drop the weight, you get hit with being out of breath.

This was already mentioned a bit above. By working in all these different angles, including in places many trainers would have you believe you should never go, such as a rounded spine with rotation in it, you’re strengthening your weak points.

By building up in this manner over time, which is done by progressing through the kettlebell juggling skills, all your weak links become much stronger.

I’m not saying it’s impossible to hurt yourself with kettlebell juggling. If you go too hard, too fast, or too heavy, then you certainly can. But with the proper training it’s avoidable and you’ll be left off better than before.

The Benefits of Kettlebell Juggling #4: Quickened Reflexes and Coordination

The regular, ballistic kettlebell exercises don’t take much of this. Sure, if you have a completely uncoordinated person who is just getting started with kettlebells they will build some coordination, but it’s only up to a minor level.

With kettlebell juggling, as tricks get more complex, your reflexes and hand-eye coordination (and even foot-eye coordination because sometimes you need to dodge those dropping bells) all improve over time and continue to do so.

In most strength training programs, coordination and reflex work simply is not a component involved in the programming, yet it is essential for martial arts and athletics.

The Benefits of Kettlebell Juggling #5: The Ability to Absorb and Redirect Force

Once again, this occurs with the basic kettlebell ballistics. With the swing you are absorbing force at the bottom and then redirecting it, reapplying it as you do the next rep. Kettlebell juggling takes us to a whole other level.

This happens in every degree, angle, and movement of the body. And once again this is something that is quite essential in most martial arts and sports.

This is probably the best benefit of them all. Kettlebell juggling is just plain fun. There are few other things where you’ll find you want to continue your practice past the point of fatigue or even exhaustion, but it has been known to happen with kettlebell juggling.

I frequently tell people that if I had to spend 45 minutes on a treadmill, I wouldn’t want to exercise either. But when I have the opportunity to build my skills in kettlebell juggling, I can have a blast doing it. No motivation is even involved.

Now kettlebell juggling certainly is not for everyone, but it’s worth giving a try – especially if you call yourself a kettlebell instructor, yet don’t even have basic skills in this whole branch of kettlebell moves. In that case, I think you have a responsibility to try it out.

There’s even more benefits than this, but this list gives you a fairly well-rounded picture of what you can gain from doing kettlebell juggling. Now that you’ve read all this, I’m sure you want to get started, so that’s just what we’re going to do.

How to do Your First Kettlebell Juggling Flip

Kettlebell juggling is extremely hard to teach through the written word. So instead, I’m going to share a video that will get you started with the simplest move, a two-hand flip, and move onto the one-hand version.

Go outside and give this a try. Once you get the two-hand flip down go for one hand, both alternating hands and with the same hand.

Then you can progress to reverse flips, helicopters, the uppercut drill, and much more. And that is only the beginning. For those interested, I’ve created a whole progressive path of kettlebell juggling mastery.