How to Pick Your Attempts for Your First Powerlifting Meet

Being successful at your first powerlifting meet is all about confidence and planning.

In the past few years, there has been a rising interest in powerlifting and competing in powerlifting events. But on meet day, there can be a lot on the plate of a new competitive lifter, including concerns about when to eat food, when and what to drink, how and when to warm up, and how to choose the weights for your attempts.

If you are looking to ensure your first meet is an enjoyable experience while getting some new PRs under your belt then this article will help to serve that purpose.

Training PRs feel amazing, but nothing beats setting one in the environment of a powerlifting meet.

The Art of Attempt Selection

The philosophy behind the attempt selection I use with my powerlifting clients is similar to what Matt Gary of Supreme Sports Performance and Training uses. Matt has collected a massive amount of data on competitive powerlifters over the years and has used that data to produce an outline of how to go about choosing attempts.

His methodology is solid and provides an outline for a successful meet. Matt and I have discussed on our podcast how each lifter starts the day with their gas tank on full, but how they choose their warm up lifts, openers, and second attempts will determine if there is enough left in the tank to go after those PRs you want on the third and final attempt.

When choosing your attempts you should have a strong understanding of your current 1RMs. Use the 1RMs you have achieved in the gym, since you haven’t yet competed. Just make sure these 1RMs were performed at competition standards:

In a powerlifting meet, you have three attempts at each lift – the squat, bench, and deadlift. The goal of any first-time competitor should be to go nine-for-nine on the lifts. The one thing you don’t want as a new lifter is to bomb out of the meet.

“A general rule of thumb is that your opener should be something you can hit a triple with on your worst day.”

Bombing out means you did not successfully complete any of your attempts and therefore have scored a zero for the meet. Depending on your particular meet and/or the lifting federation, you may be allowed to continue on in the meet, but will not accumulate an official total.

Bombing out happens most often during the squat. For a new lifter, it can be intimidating to see other lifters in your weight class open with large numbers – it can make you question your attempt selection and go heavier. But many lifters gas themselves on openers that are too heavy, which then also puts them at risk of more missed lifts later. Using common sense and the selection criteria explained below will ensure you are taking the right attempts at the right times.

The Importance of Energy Conservation

On top of not wanting to bomb out, you don’t want to choose attempts that are going to gas your energy reserves and not show all the hard work you’ve put into training for your first meet. But by using sound data and knowledge of your own lifting, you (and your coach, if applicable) can choose numbers for you to open with that will not only keep you in the meet, but also build your confidence and knock out some of those butterflies. 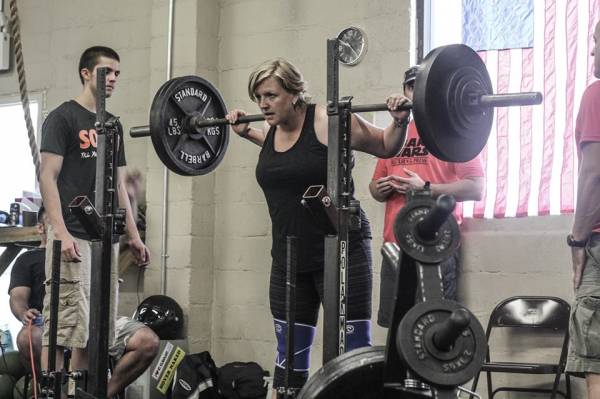 Success in your first powerlifting meet is all about confidence and planning.

Having a good first meet is about making your lifts – simple as that. Selecting your attempts properly will allow you to progress appropriately from one lift to the next, continuing to prime your nervous system and build your total. You will also get far more enjoyment by going nine-for-nine, even if the weights are lower than your ego desires, then by overestimating your attempts, missing a bunch, and finishing five-for-nine.

The job of the opening squat, bench, or deadlift is to get you into the meet for each lift. This lift sets the tone for the rest of your lifts and is vitally important in gaining confidence as you move forward. This is the lift from which you build your next attempts. If you open too heavy, you are putting yourself in bad position for the next two lifts and further draining your gas tank.

Treat this opener essentially as your last warm up, so it is a smooth transition from the warm up area to the platform. There will be people watching and you’ll have butterflies. Better to get over that nervousness on a warm-up style lift than to still have it while attempting something that requires every bit of your mental focus.

“So, be smart, choose your attempts wisely, and put the months of hard training to use in the right way – and go home with a great first-meet experience.”

A general rule of thumb is that your opener should be something you can hit a triple with on your worst day. Worst day means: boyfriend/girlfriend broke up with you the night before, you’re sick, and your dog needs an operation. This opener should be something you can triple even on that day. If you want to talk percentages, Matt Gary advocates about 90-92% of your 1RM. Other coaches may advocate lighter or heavier, but I find this range is usually spot on with most of my lifters.

There should be zero conversation about missing this opener. If you are anxious, then go a little lighter, around 88-90%, and just crush it. Leave no doubt in your mind or the judge’s mind that you are on the board and building toward a great total.

Now, we want to continue building on the success of the first attempt. This is not the time to be going after a PR. This is the time to take a bigger jump between lifts and execute the lift successfully so you can continue adding to your total.

A percentage range of around 95-98% of 1RM is a good starting point. A good coach will have a few options for his or her lifter once the opener is completed and they’ve had a chance to talk. Did the opener feel way too light? Let’s go a little to the heavier side. Were you not feeling the first lift and want to get some more confidence and better execution? Go on the lighter side and nail it. 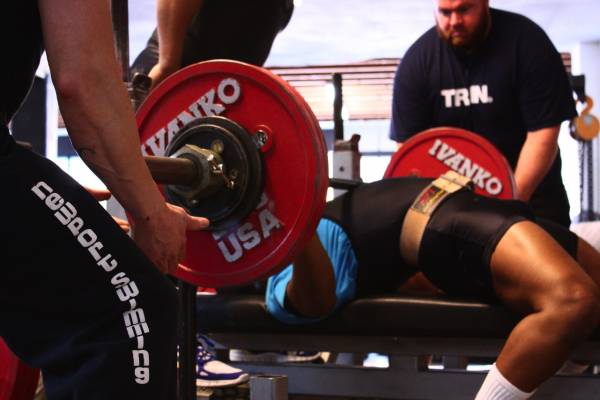 Training PRs are one thing, but save your big attempts for later in the meet to conserve your energy.

Going for a PR on your second attempt is risky and could ruin all the hard work you put into your training and preparation by draining your energy and putting you in a position to possibly miss what would have been a makeable third attempt. Stay patient, make the lift, and start to look toward your final attempt.

Also, included in your considerations should be the poundage jumps between attempts. The jump between your first and second attempt should be a larger jump than between your second and third attempts. For example, if you go from 345 to 375 pounds for your second attempt (a thirty-pound jump), then you should not go from 375 to 415 on your third, as that represents a forty-pound jump – even more than your first to second transition. The only time this rule may not apply is if you have more experience and need that third deadlift to try to catch someone in the medal category.

Your Third and Final Attempt

I know what you’re thinking: “When am I going to get to PR?” Well, my friend, now is the time. You have been smart up to this point, completing your attempts and priming your nervous system with each one. Now you get to go for the big numbers.

“Having a game plan written out takes all the guesswork out of meet day and allows you to focus on competing and having a great experience.”

I like to give my lifters three selections to choose from depending on how their second attempt went. The range will be anywhere from 100% to 103% of 1RM, depending on the lifter. And, of course, that percentage window gets tighter the heavier the attempt.

The third attempt will generally be one of three selections, starting with 100% of 1RM and moving up in a 5-10kg range from lightest to heaviest. If the second attempt went great, then maybe we go to the heaviest selection. Or, we can play it a tad conservative and choose the middle-ground selection, which still gives us a PR – but also a better chance of completing the lift. Remember, this is your first meet and you want to finish the day knowing you did your best and made smart decisions.

Failing to Plan Is Planning to Fail

Choosing attempts is a crucial part of any meet, but especially your first. Having a game plan written out takes all the guesswork out of meet day and allows you to focus on competing and having a great experience. It also keeps your nerves from interfering with your strategy or causing you to over- or under-estimate yourself.

Your game plan should include:

I recently had a first-time powerlifter compete. He followed the outline I gave him based on all the same advice I gave here. Not only did he end up going nine-for-nine in his first meet, but he hit a PR in each lift. On top of that, because he was smart in his attempt selections and made all his lifts, his total earned him second place in one of the most competitive weight classes – which was just icing on the cake for him.

So, be smart, choose your attempts wisely, and put the months of hard training to use in the right way – and go home with a great first-meet experience.