How to Save Money on Endurance Events, Gear, and Coaching

This article is for the 30% of triathletes who are students, blue-collar workers, and government or military workers.

These days, entering even a running race can cost upward of $60-100, especially if we are talking about some of the trendier runs. You also see obstacle races closer to the $150-200 price point, yet these races still sell out.

“With the average monthly fee being $160, it’s tough to justify paying for coaching when you are just starting out.”

As a coach, I hate seeing this because it means less disposable income available for individuals to purchase better or faster gear or pay for coaching. In 2012, Training Peaks sent a survey out to all its coaches. With just over 600 responses, these coaches reported the average cost to train with them as $162 per month. My fee is only $129. I refuse to raise my fees at this point in time because I believe it isn’t fair to that thirty percent of individuals who may not make anywhere close to $126,000 a year.

Save Money on Event Expenses

Typically, Ironman races cost anywhere from $500-1,000 to enter, and that doesn’t include the cost to travel to these races. Students probably can’t afford that, yet they are the future of endurance athletes.

To bring down event costs, consider racing locally or making up your own races with friends. Let’s be honest, that does sound fun, right? For my local athletes, I set aside a day to run a mock triathlon. I even drive them from the pool to the “transition”(normally their house). But they get to race.

Save Money on Gear Expenses

The cost of equipment can be steep, but if you spend wisely, it won’t be as much as you’d think. A regular road bike, basic wetsuit, and decent running shoes should only cost around $1,500-2,000. While that sounds like a lot, the most expensive purchase will be your bike, bike shoes, running shoes, and tri-suit. If you have all the other gear or get used gear then the overall cost comes down significantly.

ADD IT ALL UP: The Hidden Costs of Pursuing a Passion

Purchasing used gear or beginner gear will enable you to stretch your dollar, but I have an additional secret that most don’t ever consider. If you want to do a triathlon, consider participating with a friend or training partner in a relay and doing the swimming and running portions. If you compete this way, you get the experience of racing an endurance event without the need to invest in a bike. 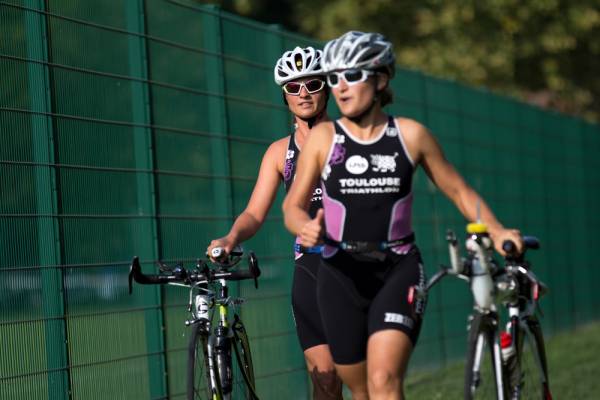 Save Money on Coaching Expenses

Of course, the last expense involved with triathlon training is coaching. Coaching fees increase year after year. And while the endurance coaching market becomes saturated with mediocre coaches with no educational background, paying for a coach becomes much harder.

My fee is $129 per month for online coaching and higher for in-person coaching. I have restrained myself from raising these rates because I don’t want to exclude someone from the sport just because he or she can’t afford a coach. With the average monthly fee being $160, it’s tough to justify paying for coaching when you are just starting out.

RELATED: 5 Things to Ask Yourself Before Hiring a Coach

To save on a coach, look into group coaching or joining a bike club. Also look for a local masters swimming program. These are much cheaper ways to get coaching, though not as effective or personal as having your own coach. But they are still effective when it comes to what you are trying to achieve, which is participating in the sport of triathlon and bettering yourself and your performance.

These are just a few suggestions on how to bring down the price of endurance sports. But this is not a complete list. I am sure there are tons of nuggets I left out or don’t know about. How have you found ways to save money when it comes to running, swimming, and cycling? Post your ideas to the comments below.

3. Training Peaks. Report on the State of Endurance Coaching, 2013.